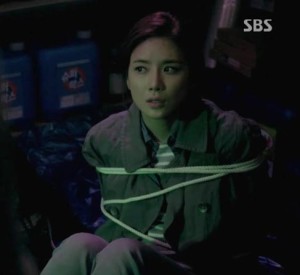 After the first four episodes set the background for God’s Gift and jump-started the chase for the killer, the subsequent four episodes covered so much ground that I can’t believe we’re only halfway through the series. Although the plot is already chock-full of mind-blowing situations, it’s as though we’ve barely scratched the surface, with regards to the twists and turns that we’re being dealt.

So how has the search for the Big Bad Wolf been going? Well, the murderer per se has only been hinted at, but many other suspicious characters are being unfurled in the process — the killer’s accomplice Bong-sub, psychopathic child-killer Moon-soo, Soo-hyun’s colleague Min-ah  who just happens to be pregnant with Ji-hoon‘s baby. Red herrings are being dropped like nobody’s business, each more earth-shattering than the previous. Believe me, my jaw has dropped open so many times that I’ve lost count.

What I initially expected to be a pure catch-the-killer thriller turned out to be so much more than that. God’s Gift includes a whole string of other sketchy criminals and characters, smoothly weaved into the complex character web. It’s reached the point where I now expect every single character is play some sort of significant role in the bigger scheme of events, even if they currently seem like a mere filler character– the rich grandpa. And, kudos to the writers for revealing these entanglements in a reasonably organic manner. 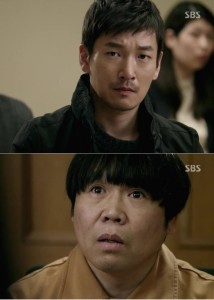 Apart from our main leads chasing down our Big Bad Wolf, I was surprised to find out that this fourteen days time-travel was also an opporunity for Dong-chan to prevent Dong-ho’s execution. It seems a little ironic, especially since it was Dong-chan’s testimony which condemned his brother. What Dong-chan has to do, is to distinguish between what he saw, versus what he thought he saw. Now, that’s a sibling conflict that’s going to take a lot of self-reflection to untie. Especially since it was revealed that Dong-ho supposedly murdered Dong-chan’s first love, this adds a further kink in this whole picture. Will Dong-chan be able to be look at this unbiasedly, without being influenced by the death of his first love?

Beyond that, Dong-chan has a lot of issues to sort out. He hates his brother for being a murderer, and I’m sure he feels a semblance of disgust at himself for condemning his brother. At the same time, he also detests himself for permanently handicapping Yong-gyu. Considering the guilt Dong-chan harbours for accidentally shotting Yong-gyu in the past, it’s no surprise that Dong-chan lives such a frivolous lifestyle. The intensity of his frustration and anger is so raw that you can’t help but to symphathize.

I previously mentioned that Soo-hyun’s impulsive nature was understandable due to her fear of losing Saet-byul again. But as the episodes go on, her impulses is slowly revealing a selfish nature. It’s almost as though she functions entirely on her id, and her instant self-gratification is of the utmost importance. She needs to confront Ji-hoon immediately, even if he’s being bombarded by a bunch of reporters. She needs to questions Saet-byul, even if it frightens her in the middle of the night. She needs to rush into Moon-soo’s house, even if means putting the plan in danger. Her ‘act first, think later’ behaviour is bordering on inconsiderate, and she constantly leaves Dong-chan in the dust, to clean up her mess. But of course, his spidey sense never fails to save the damsel in distress. Or should I say, the damsel who rushed herself into distress. 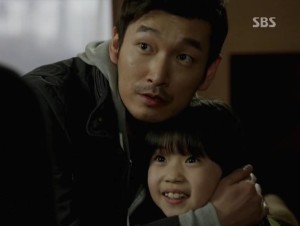 That aside, the budding friendship between Dong-chan and Soo-hyun is growing, as being partners makes them confide and depend on each other. Besides the fact that Ji-hoon is one whole ball of suspicious, my hopes for a pseudo-family unit of Soo-hyun, Dong-chan and Sae-byul, was reignited when the females had to room together with Dong-chan. Yay for roommate hijinks — adult magazines and underwear awkwardness. This spells an opportune moment to create some blurred relationship lines.

So far, it’s been all about Soo-hyun, Soo-hyun, Soo-hyun, and that’s fine since she’s a unique character. But now that the the important characters are all gathered at Dong-chan’s house, I’m looking forward to shifting the spotlight to him – peeling back his layers, and focusing on his own personal journey to face his demons. And let me tell you, brains have never looked more attractive on an ahjusshi. Jo Seung-woo is rocking my socks as quick-witted and smirky Dong-chan. And oh, did I mention the brains?

Seeing how Soo-hyun fell in love with Ji-hoon, I can’t help but imagine how him turned out as shady as hell right now. He probably has a ton more secrets up his sleeves, and seriously, his excuse for his affair is so pathetic, it’s as though he doesn’t even feel guilty. Min-ah is a victim of her circumstance, but I’m not sure where her sense of entitlement of Ji-hoon comes from. And frankly it irks me a little that she’s actually angry at Soo-hyun. But since she’s just one of the many puzzle pieces, I’m willing to close one eye and move on with it. Hints about a best-friends-turned-enemies history between Woo-jin and Dong-chan pings my bromance radar, and I’m expecting some sort of reconciliation between them now that they are working towards a common goal, though on different sides of the law. I feel the emotions behind Dong-chan’s grudge against Woo-jin, and not least due to Jo Seung-woo’s delivery hitting the nail on the head. 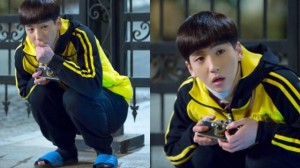 I really need to give Baro credit for his sophomore acting challenge. When I first heard that Baro was going to be tackling a mentally handicapped character, I did have my doubts as to how he would pull it off since Yong-gyu is a tough character to tackle. However, his efforts put into immersing himself into his character has evidently not gone to waste. My brain only registers Yong-gyu, instead of Baro as Yong-gyu, and that’s a great step in the right direction for his acting career.

God’s Gift is still delivering a tight storyline with electric characters and complex relationships. Even a simple conversation between the characters is engaging, let alone the thriller scenes. I highly recommend this drama, but only if your heart can take the palpitations .