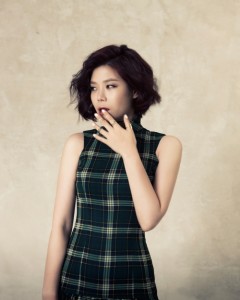 When K-pop fans are asked to think of the top Korean ballad singers, many will perhaps name artists such as Sung Si-kyung or Baek Ji-young. Matching their wonderfully emotional voices, however, is Lee Se-jin, better known by her stage name Lyn.

Crowned as “the OST queen,” Lyn has lent her voice for the theme songs of The Moon Embraces the Sun and You From Another Star. However, the songstress’s newest project is her 8th full-length album, titled Le Grand Bleu, released on March 6. Containing 13 tracks — two of which are instrumentals and six of which were included in her two single albums from last year — the album offers a variety of emotions an individual may experience during a relationship.

The title track “Miss You…Crying” was composed by songwriter Kim Won, who has previously worked with other ballad singers such as The One. This song describes a woman thinking back on her past love and missing her lover so much that she can’t stop her tears. At the time of its release, the song topped charts on eight Korean music sites, so it’s not hard to imagine that many poor souls going through painful breakups are belting out “Miss You…Crying” at noraebangs across Korea.

Lyn’s voice doesn’t disappoint (I don’t really think it ever does), but the way the song unfolds just isn’t as striking as some of her other pieces. “Miss You…Crying” may work well as the main theme for a pair of star-crossed lovers in a tearjerking drama, but I wish the title track for this album was a bit stronger.

The second track is “Breakable Heart,” the title song off Lyn’s April 2013 single album, 8th #1. One of my favorites out of all the songs, “Breakable Heart” achieves what “Miss You…Crying” is unable to do: induce goosebumps. Accompanied by a delicate string of piano notes, Lyn begins the song in a half-whisper, eventually crescendo-ing to a beautiful belt by the chorus.

Describing a love opposed to by everyone around the woman, the lyrics reveal the frustrations she goes through during the struggle to keep her relationship and also please her family and friends. Beast’s Yong Jun-hyung also makes a rap appearance, and though not everyone is a fan of his segment, the rap adds another dimension to the song for me, creating a dichotomy between the woman’s unwavering determination and her lover’s acceptance of letting go of their love.

Next, we have “Back Hug.” From the melody, it’s easy to come to the conclusion that this is a more light-hearted song than the previous two. But, once again, Lyn sings about heartbreak and sorrow. The details of the song, however, make it far above the standards for a filler track. There are a few heartbeats in the background as Lyn asks her lover to take his anger out on her, and the transitions between the verses and chorus make me wish we were provided with an instrumental as well. As an additional surprise, Lyn also reveals some speaking-turned-rapping lines during the bridge.

As if continuing the trend of an old song following a new song, we have “I Like This Song” after “Back Hug.” This track was the title of 8th #2, released in August 2013. The song starts off with an array of people giving their approval to the song in different languages. However, after a look at the lyrics, the “song” that Lyn refers to actually stands for a relationship between lovers.

The chorus specifically asks, “Will you listen to this song?” and “Will you love this song?” From the speech segment at the beginning, it’s clear that there are indeed many audiences who are offering their approval, directly contrasting the objections described in “Breakable Heart.” Interestingly, these two were the title tracks of Lyn’s two single albums last year, showcasing the variety of emotions the songstress has mastered.

Another favorite of mine, “Song For Love” is the fifth track. Along with “I Like This Song,” this piece demonstrates the power of blending music and love. The background vocals are stunning — especially the “ah’s”  in the chorus — and the repeating piano sequence and strong drum beats make this the ultimate feel-good song on the album. 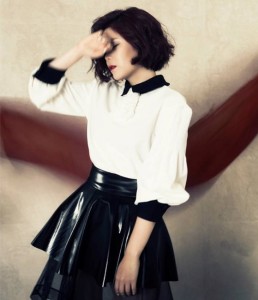 “What About Us” takes us back to a melancholy mood. Yes, it’s another beautiful ballad, but the chorus is filled with yearning and hurting and crying again. This song, both in terms of theme and execution, feels like an echo of “Miss You…Crying,” and is slightly unsatisfying as we begin to reach the latter half of the album.

Next is “Tonight,” the second song on 8th #1. Baechigi dominates during the first half of this song with his rap, unfortunately to the point where I feel like his precision and aggressiveness don’t compliment the softness of Lyn’s vocals. “Tonight” could have felt more complete if Lyn had executed all of it herself, but it’s still a nice listen.

Following the song from 8th #1 is a track from 8th #2, “High Heel,” featuring singer-songwriter Joo Young. Departing from the themes already present in Le Grand Bleu, this track has a sexy concept — the lyrics include expressing how they would like to “do things that are hard to say with words.” Joo Young’s smooth voice blends well with Lyn’s, but, overall, the song lacks much spark and ends up being a disappointing R&B filler.

The fourth, and final, new track is “Melted In The Air.” Unlike the many other songs that start out with dominating piano sounds, we’re welcomed by an acoustic guitar here (although the piano does join in later). A song quieter and mellower than the rest of Le Grand Bleu, “Melted In The Air” can easily be a number often performed at a music bar. 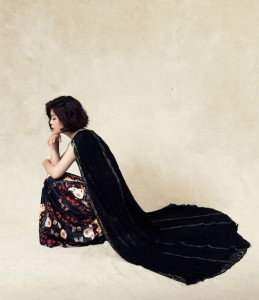 Le Grand Bleu nears the finish line with “Even I’ve Just Loved You” from 8th #1. Like the previous track, “Even I’ve Just Loved You” has an acoustic sound that makes the song rely heavily on Lyn’s voice. During the chorus, as Lyn is asking her lover the reason behind his cold treatment to her, the music becomes as minimalistic as ever, focusing in on the raw emotion behind the questioning.

I understand placing these “Even I’ve Just Loved You” and “Melted In The Air” together to soften the sound of the album to prepare for a big finale, but it’s difficult to recall what stands out about each one when hearing them so close to one another.

We previously arrived at the middle of Le Grand Bleu with the Korean version of “Song For Love,” and we reach the end with the English version. Although she has an accent, Lyn delivers the heartfelt lyrics with so much hope and warmth that I can’t help but prefer this version to the Korean one. “Song For Love” once again brightens the mood as the album reaches its end.

Closing the album are the instrumentals for “Miss You…Crying” and “Tonight.” Perhaps a handful of listeners can try their hands at singing the songs, but the piano accompaniments are beautiful to just listen to as well.

Undoubtedly, this album takes us through all the ups and downs of an ultimately unfortunate romance. However, because the two single albums of 2013 were so amazing, they became difficult acts for even Lyn herself to follow up to. Nevertheless, even though the new tracks in Le Grand Bleu may not have been able to surpass her previous wonders, but I have no doubt that Lyn will continue to amaze us in the future.