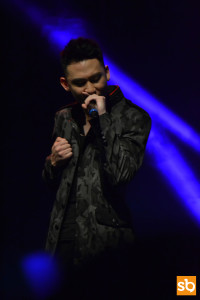 As I was waiting outside the Best Buy Theater in New York for U-Kiss‘ concert to start, a woman came up to me and asked me who was playing at the venue that night. In retrospect, it might have made more sense to coolly point at the giant marquee outside the theater advertising the U-Kiss concert, instead of blabbering something along the lines of “Well, they’re this Korean boy band, and they don’t usually play concerts in the U.S. but I guess they’re here doing a showcase, and I’ve listened to their music for a while and it’s pretty good, and their name is, er, U-Kiss. Or something like that.”

Amazingly, the woman didn’t walk away after this stunning display of articulateness, and instead said, “Yeah, some of these people have been waiting in line since 5am, so I guess I’ve gotta check them out.”

“Yeah,” I replied. “They’re definitely worth your time.”

For those of us who have long been baptized into the K-pop fold, it’s somewhat sobering to think that most of the people who saw that marquee and the long line of dedicated fans outside the venue that night probably assumed that U-Kiss was a hugely popular band — too huge, in fact, for their popularity to be contained within the borders of their native South Korea.

In reality, U-Kiss has struggled to hit mainstream success in Korea since their debut in 2008, and their recent tours in Southeast Asia and South America were an attempt to take advantage of their modest popularity overseas. Their 2011 Japanese debut under Avex Trax launched a moderately successful career in Japan, earning them a generous number of Oricon chart-topping singles. But despite their successes overseas, it’s clear that U-Kiss is still struggling to make it where it matters. The lack of awards, accolades, and fan fervor in Korea casts a shadow on their overseas work, and their reputation amongst international K-pop fans as the longest-lasting “nugu” idol doesn’t help, either.

For a group who’s famous for being famous everywhere except for Korea, a U-Kiss tour in the United States was long overdue. The January 9th New York appearance was U-Kiss’ first stop in their three-concert stint in the U.S., having subsequently played at San Francisco’s Warfield Theatre on the 11th. The group is scheduled to wrap up the tour on the 14th with their third and final concert at Club Nokia in Los Angeles. 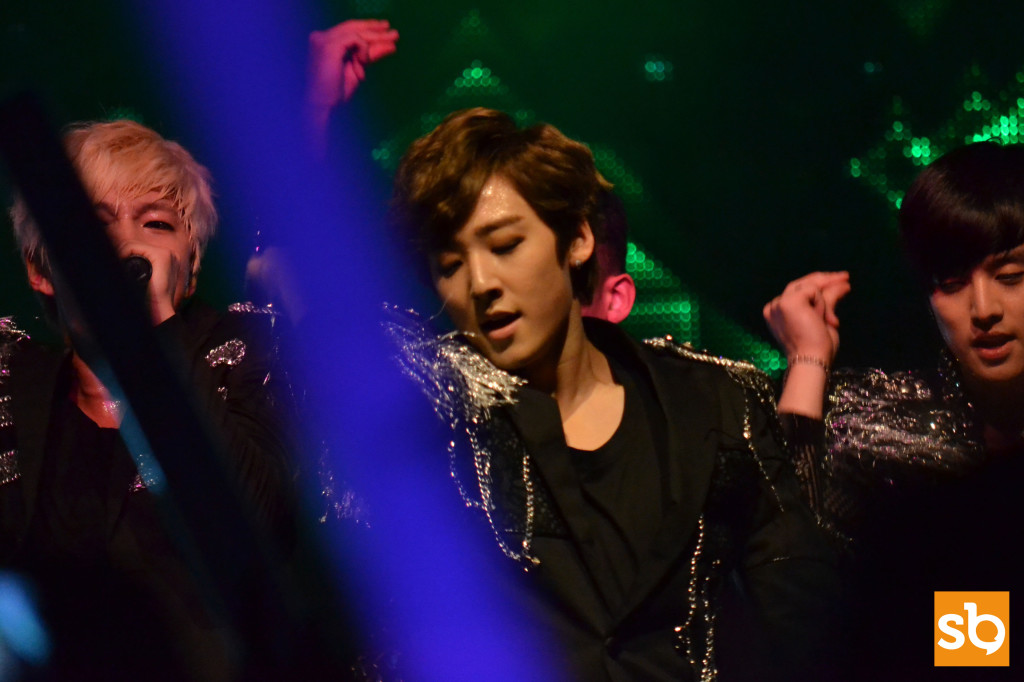 U-Kiss is far from the first K-pop group to tour the United States, but from the moment the members stepped on stage for their opening number, “Stop Girl,” it was clear that this concert was going to be different. Instead of launching from underneath the stage or materializing amidst flying sparks and flashing lights, the U-Kiss members simply walked onto the stage and stood in a straight line as the lights went up, singing the first few measures of “Stop Girl” before jumping straight into the choreography.

There were no crazy remixes, no flashy solo performances, and only one outfit change throughout the entire concert. All seventeen songs were performed straight with no frills, causing the concert to feel a bit like an extended U-Kiss Music Bank special. It’s the exact same thing that SMTown was guilty of when they came to Madison Square Garden in 2011 — performances that offered little more than what well-seasoned fans had already seen dozens of times on their computer screens.

And yet, U-Kiss’ concert in New York proved to be an incredibly memorable experience even for this somewhat jaded reviewer, as the simplicity of U-Kiss’ setlist turned out to be its greatest strength. Unlike most other K-pop artists who simply transplanted their large-scale Asian concert setups into their small-scale American performances, U-Kiss kicked off this tour with a brand new setlist (with some songs chosen by the fans) that was not only chosen with special consideration paid to their American audiences, but was also structured to accommodate a smaller audience and a more intimate venue.

Say what they may about U-Kiss’ success as a group, but it’s hard to argue that U-Kiss’ greatest strength lies anywhere other than its music. The bare-bones format of U-Kiss’ performances allowed them the opportunity to show off their musical repertoire — a collection already so strong on its own that the only thing that could enhance it is a solid live performance by the group. With this, U-Kiss delivered to its fullest extent; they sang every song live in their dance-heavy concert set, with nary a note out of place.

Soohyun served as the vocal anchor for most of the songs, but fellow main vocalists Kevin and Hoon consistently pulled their own weight in the ballads and uptempo dance tracks alike. Lesser known tracks such as “Obsession” and “She’s Mine” carried the same amount of energy as crowd favorites like “Tick Tack,” “Doradora” and “Bingeul Bingeul.” And the ballads were far from filler pieces; the group’s performances of “Someday” and “0330” featured some gorgeous live harmonies that allowed even the less vocally-spotlighted members a chance to shine. All in all, the concert’s no-frills approach truly allowed the music to stand on its own and speak for itself. 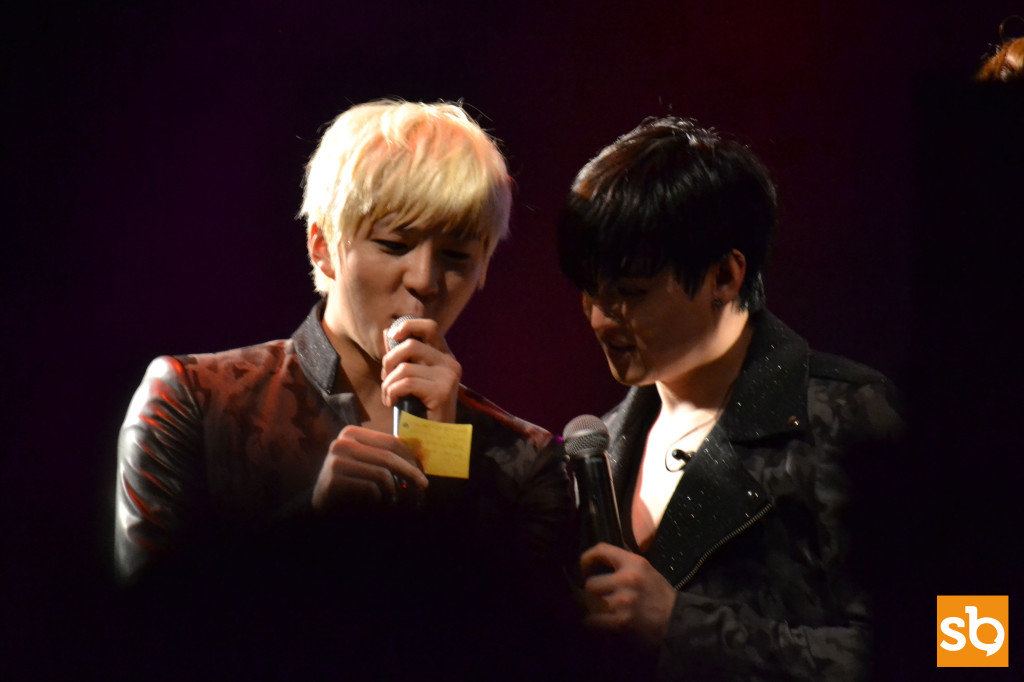 The group’s earnestness in their performances carried over to their interactions with the audience throughout the concert. It’s rare to see K-pop idols answer questions directly from the audience, let alone highlight and serenade a special “Superfan” on stage — both of which U-Kiss did during the concert. However, the real heart of these interactions with the audience didn’t lie in these special events built into the program, but with the way the members carried themselves onstage. While it certainly helped to have Kevin, Eli, and AJ as the night’s official MCs and interim translators, the language barrier didn’t stop the Korean-speaking members of the group from horsing around on stage, only to jump off the stage and directly interact with the fans in the pit. There are few occasions where one will be able to see a K-pop idol randomly break out into “What Does The Fox Say?” in between sets. This U-Kiss concert is one of them.

The freeness with which the members interacted with the audience coupled with the professionalism in their performances reflects a unique humility in the group. U-Kiss isn’t popular, but they’re still a group with more than five years of experience under their belt. They know their craft well, and their performance skills exhibit a finesse comparable to that of other K-pop groups playing to crowds of 50,000 or more people.

But their professionalism didn’t translate into an inaccessible, cold stiffness when it came to interacting with their audience. Rather than presenting themselves as idols towering above the mere mortals in their audience, U-Kiss presented themselves as humans not too different from their fans. AJ revealed which song he sang in the shower. Eli proudly pointed out his dad in the audience, but shyly mentioned that his sister was also there — with her boyfriend, no less. And at the end of the concert, Kevin teared up a little and said quietly, “I’m just really happy to be home.” 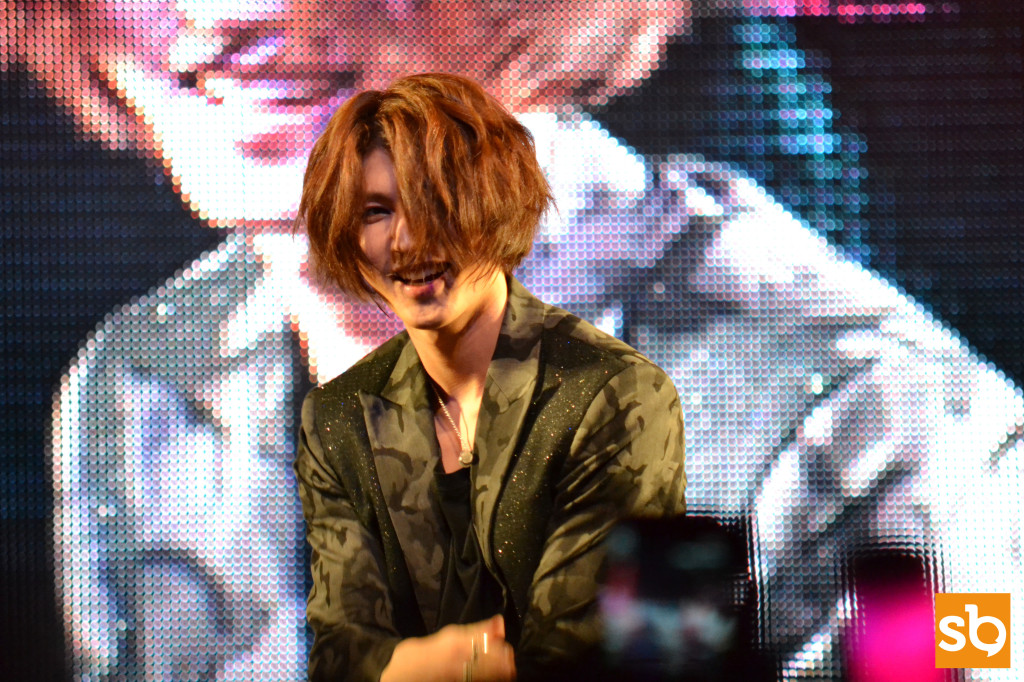 It’s a kind of humility that comes with years of playing to small crowds and relying on a small, dedicated fanbase for emotional support as much as they rely on them for financial support. After witnessing their performances and seeing them in action, it’s impossible to not want more for U-Kiss’ career. But while U-Kiss has everything it takes to be a solid pop group, they’re also in a unique position where they can see eye-to-eye with their audience and foster a genuine relationship with their fans.

It’s debatable whether U-Kiss will ever become big enough to be one of the groups to ride in on the great Hallyu wave that’s been anticipated to hit the States for years. U-Kiss’ American tour is part of Mnet America’s Headliner series, and their identity as “International Super Stars” immediately frames them as Hallyu idols ready to take the world by storm. However, time has proven again and again that popularity in Korea almost always translates into popularity in the international sphere, and never the other way around. If Hallyu really does take off in the United States, the chances that U-Kiss will be tagging along for the ride are slim.

But with what U-Kiss has to offer, will that really matter? Indeed, the K-pop industry is a harsh mistress, and high quality music or good performance chops alone are no longer enough to satisfy her. But for people unexposed to K-pop, U-Kiss’ simple formula of good music and solid performances might be enough to win them over. It’s time for U-Kiss to stop playing the K-pop game, and instead focus on using their strengths to propel themselves forward as a unique group that is both talented and experienced enough to make their own rules.

Check out some photos from the concert below.