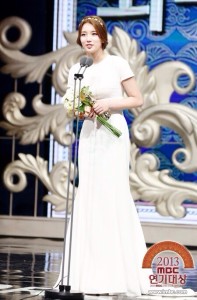 Media outlets and netizens alike admonished Suzy for her unprofessional behavior in front of her seniors — the swaying, the giggling, the lack of preparation. Her unpreparedness makes her look immature, and makes it seem like she did not take the award seriously. Moreover, not only was her conduct criticised, but also the content of her speech, such as confusion over who to thank and for mentioning her dog. Hosts Lee Seung-gi and Han Ji-hye even prompted her, telling her to speak slowly and suggesting people to thank, such as her makeup artist.

All of this comes on top of the surprise that Suzy won the award in the first place. Suzy may be popular, but she is not a veteran actress, nor was her work on Gu Family Book regarded as highly as the other nominees’, particularly Go Hyun-jung’s. Many have pointed out that other actors in the audience gave Suzy a chilly response, pulling camera shots from the speech where senior actors looked less-than-pleased. From one point of view, this is a young idol completely undeserving of such an award, acting disrespectful toward her seniors.

Here is the speech itself:

Defenders say that such harsh critique is unwarranted, and they empathize with Suzy’s position. Giving a speech is nerve wracking for the majority of people, but having to do one on national television, in front of all your seniors, when everyone knows you don’t deserve the award? Nerves times a million. Some say Suzy clearly didn’t expect to win, so she was unprepared, but others argue that every nominee should prepare a speech; it’s the professional thing to do. Of course, there is the common belief that nominees know the winner ahead of time, in which case there is no excuse for Suzy’s lack of preparation.

Others point out that it is very easy to forget a speech when nervous or overwhelmed. Actress Shin Eun-kyung, whose face has been used to show the “displeased” reaction, clarified that she wasn’t upset with Suzy, just tired. She also said that even veteran actors blank out when faced with the podium, and that she hoped people would be more understanding. If one looks at all the cutaways during the speech, some actors are smiling, and also the audience applauds in the middle of the speech, assumedly in encouragement.

And then there is the camp of commenters who cannot believe this is a big deal at all. An idol gave an ill-prepared speech — who cares? Just another day in K-entertainment.

Much of the commenting comes in the form of projecting onto Suzy. Harsh critics say her speech shows she is immature, air-headed, and dumb. Others say she is nervous, shocked, and surprised. However, criticisms of Suzy’s speech are only a small portion of the bigger issue at hand. The whole incident draws out the underlying animosity towards idols acting in dramas. There are several things being criticized here, and perhaps Suzy is taking some unnecessary blame. Where should criticism lie, and what is really being criticized? 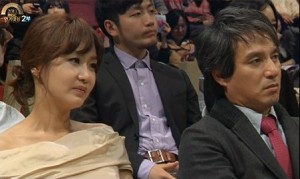 It all seems to stem from the fact that just about everyone believes Suzy should not have won the award. While the “Top Excellence Award” suggests it should go to the person with the most excellent performance, it was given to the most popular idol-actress in the drama with the highest ratings, making the award seem like a popularity contest. Here the blame lies with the awarding entity, MBC, and some netizens say the network should expect a backlash.

We’ve covered the critique of idol-actors from many different angles. Even as some idols are recognized for their acting skill, the overriding sentiment is that idols cannot hold a candle to those who are trained actors and have worked in the industry for years, dedicating themselves to one craft. Idols are seen as marketing tools to draw more viewers, and unfortunately Suzy’s winning and the nature of her acceptance speech contributes to this belief, whether true or not.

However, it should also be noted that comparisons were drawn between Suzy’s speech and Yoona’s during the 2013 KBS Drama Awards, where Yoona won the Excellence Award for her role in Prime Minister and I. While she’s still a young idol winning an award over her seniors, reactions were less harsh as netizens felt Yoona was appropriately humble and composed during her speech. This is not to start a Suzy vs. Yoona war, but to draw attention to the fact that while two idols received acting awards for excellence, and while both said they were undeserving in their speeches, their presentations elicited drastically different reactions, showing that the speech does matter in coloring public opinion.

While we cannot know Suzy’s state of mind, her speech does drag on, and it is clear that she either did not prepare or blanked out completely. Readers, what do you think? Is Suzy being judged too harshly, or is the criticism deserved?