Mamamoo Impresses with "Don't Be Happy" 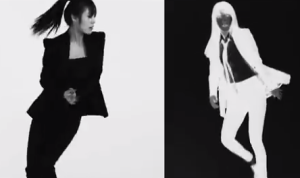 K-pop is no stranger to odd group names and upon hearing that a female group named Mamamoo was set to debut, I was immediately perplexed by the name. However, Mamamoo has an interesting explanation behind their peculiar name, which sounds less strange in Korean.

“Mama” was chosen because it is one of the first meaningful words a baby says and “moo” was affixed to the former because it is the first (Korean) syllable of the word ‘music’. When put together, “mamamoo” expresses the group’s wish to show the world original and heartfelt music. Fortunately for them, “Don’t Be Happy” hits all the right notes.

Filmed in black and white, the tone of the music video instantly complements the smooth R&B melody of the song. The strong vocals are another plus as the members’ lower registers add an air of sultriness. And although the members don’t harmonize much throughout the song, the few instances that they do enrich the song significantly.

Bumkey, who is featured, is barely heard in the music video version of the song. This is because the MV starts off halfway through the official version. It is a strange but understandable decision, as Bumkey dominates the first half the original version. As this is Mamamoo’s debut MV, the decision to keep the focus on the members and their vocal talents is one that is well in order.

Another choice detail in the MV is the inclusion of the members (and their names) at the end. The black and white of the MV make it difficult to tell the members apart, especially since there are only a few lingering close-ups. It is then appropriate that the members are formally introduced. They are: Solar, Moon Byul, Wha Sa, and Whee In.

The standout scenes of the music video are the phone dance scenes. In addition to the phone dance being creative, the monotony of the dark and light panels adds a striking and artistic contrast to the scenes.

While I generally don’t care for black and white music videos, these scenes have made up for the boring first half.

Another aspect of the MV that has drawn me in is the lack of a concept. Mamamoo isn’t trying to be cute or sexy — their main aim seems to be to present their genre and vocals. The fact that there is provocativeness involved is only a bonus.

The reason I say this is because girl groups often push for a sexy (or cute) concept and it ends up feeling forced. Mamamoo seems to have an innate sexiness and they exude it just by wearing suits. It came off as natural instead of trying-too-hard, which is a perfect description of their overall impression.

“Don’t Be Happy” isn’t the most entertaining music video out there but it functions perfectly as a debut MV — the allure of the song is presented, and the members are well-introduced. Luckily, Mamamoo demonstrates great vocal ability, as well as a unique sound, for a girl group just starting out. Mamamoo is the first debut of the year to capture my attention, and I hope they continue on this promising track.