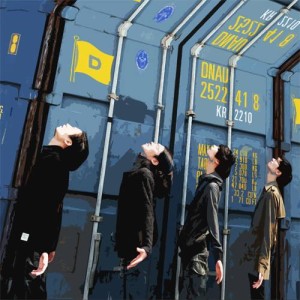 Hello everyone, it’s time for another Indie Gem! This week we’re going to explore the sounds of Square the Circle. A Seoul-based rock band, Square the Circle’s name means “try the impossible.” While it’s admittedly more difficult to make it as an indie band in South Korea, Square the Circle has been doing a good job of cranking out some quality tunes, making success seem not so impossible for them.

Formed in 2011, the members are Park Joon-hee (vocals and guitar), Kim Min-soo (guitar), Ahn Hyo-rohl (bass and vocals), and Heo Jeong-joon (drums). Their music is characterized by a no-frills, straightforward rock sound: fast-paced, high energy, and precision playing. Call them garage rock, call them hard rock, it doesn’t really matter — rock is in the label somewhere.

So far the band only has one single and one EP, but these short releases prove the old adage of quality over quantity. They released single Slow Starter in 2012 (remastered in 2013), and EP 1003 in August 2013. Let’s start with “Bitchquito,” which is featured on both albums.

The song is about a woman who sucks men’s blood (money) like a mosquito. It’s got a great combo of spontaneity and careful composition; there is enough variety and flair to keep a listener interested as the song progresses, but close attention is also paid to how the guitars and drums relate. Particularly in the bridge, it can be heard that neither takes the back seat; rather they play off each other through rhythmic push and pull, sometimes completely in-sync, and other times running separately, but on the same road. It’s a nice touch that the MV illustrates this by giving focus to the hands and instruments. Joon-hee’s vocals also stand out as emotive and clear, with a hint of roughness. It has instant replayability, and is my favorite from their first single.

High-energy “Flip Flap” and darker-sounding “Tread the Shadow,” the other two tracks from Slow Starter, show more of Square the Circle’s raw and discordant side, though the technical guitar is still present in the verses. Both are fast-paced and demonstrate a strong ability to integrate all the instrumentation and vocals with style. Slow Starter is a good introduction to the band and what they’re all about.

If Slow Starter is short and sweet like speed-dating, then EP 1003 serves as the second date. As a sidenote, the album title “1003” comes from the number of a room in which they recorded their album. In this release, they haven’t changed their sound, so much as deepened it. “Wild Turkey,” a song about living life to the fullest, sounds like a more refined “Flip Flap.” It’s still got the drive, but there’s also a fuller sound from both guitars and a little more breathing room at the bridge.

Another surprise from 1003 is “The Golden Yellow,” featuring Hyo-rohl for main vocals, and it is the closest the band comes to a slow song on this album. His deeper voice and rougher tone gives the song almost an 80s power ballad feel, which is not a bad thing. The sound is still Square the Circle’s, but Hyo-rohl’s vocals are strong enough to add a completely different dimension to their music. The singing is almost overpowering in this mellow song, but as with their other songs, the bridge really brings it back to the song composition.

The track “Vegetable Juice” is a little macabre in message: A not-so-nice woman (assumedly the one from “Bitchquito”) is metaphorically blended with some vegetables by her ex. The ridiculousness of the situation and playfulness in the music helps to make the song humorous rather than disturbing. However, the standout feature is the way both Joon-hee’s and Hyo-rohl’s vocals are mixed. They seamlessly flow back and forth, taking advantage of their different qualities to add variety, and meet in the chorus for some harmony. The format works for them, and doesn’t overpower the upbeat drum and guitar rhythms. Here, they are performing it live:

There are a couple more tracks to check out from them, but I’ll leave those for the curious. Though their oeuvre may be small and their history short, Square the Circle is definitely worth checking out and following. Here’s hoping for a full-length soon!