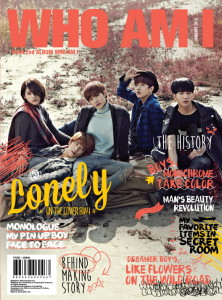 B1A4 is back with their second full-length album, Who Am I. It’s been a while since we last heard from the boys with What’s Happening? but Who Am I has proved worth the wait. The album is full and cohesive with some beautiful tracks, but perhaps the most interesting part is how much it illustrates B1A4’s musical growth. With eight of the 12 tracks composed by the group members, Who Am I shows off the boys’ full range of talent.

Overall, the album is characterized by a midtempo, mellow feel. “Memory” is an overarching theme in the album, so the tracks not only intertwine through sound, but also through shared concept. Love and loss are definitely the bread and butter topics of this album, but what the album does do well is draw a variety of sounds from a single theme.

The intro track sets the tone for the album as all good intro tracks do, with a beautiful layering of music, most notably from the harmonica and faraway “outdoor” sounds, conjuring up images of days gone by. Those outdoor sounds then bleed into the title track “Lonely,” which describes being alone after a breakup.

Composed by Jinyoung, the song begins with a strong rhythm, musical layering, and harmony, all of which continue throughout. Even when members are singing by themselves, the others’ voices are still present through harmonic backing, giving the vocals a fuller feel. The rhythm play with the drums and crescendos facilitates a smooth back and forth between members, showing off how well their voices blend when they sing together. “Lonely” has all the catchiness and musical strength a group could want in a title track, but most of all, its sound is unique to B1A4.

“Love Then” (feat. Harim) is an appropriate follow up after “Lonely,” as it talks about moving on after a relationship and remembering happy times. The track starts off with that warm harmonica from the intro, leading into an easy-sounding, if not bittersweet, song. The entire track is light. It is musically sparse compared to “Lonely,” and all of the boys’ voices maintain a whimsical quality; even Baro gets some softer tones in there. With “Lonely” musically representing emotional turmoil, “Love Then” is a nice pairing to represent lighter reflections.

The album then picks up with the falling-in-love song, “Amazing.” It still has the ease from the last track, but adds a steady, danceable rhythm, giving the song an upbeat, happy feel. It’s not the hyper-happy we have heard from B1A4 in the past, but a comfortable, unrestrained sound that is a little more effortless. Props to them for retaining their fun side with the “woo woos” throughout the song.

Next we have a trio of breakup songs. First is “Baby,” another Jinyoung-composed track with an R&B flair. Set in the middle of a breakup, the sad lyrics are almost cruel after the happiness of “Amazing,” but the boys’ incredibly smooth vocals make up for it. Only the distorted guitar indicates any roughness. After that is “Oh My God.” This time the breakup involves a third party, ouch. Though it starts with just vocals and a guitar, the rest of the instrumentation kicks in with the crescendo into the chorus, musically mirroring the lyrics’ realization that the singer’s significant other is involved with another person. The song maintains its pace and never explodes as one might expect given the subject matter, but the boys’ voices do well to express confusion and frustration.

The next is Sandeul and Gongchan’s duet, “Too Much,” the true ballad of the album. It’s a pleasant surprise that this track features Gongchan as well, and overall the maknae has gotten some much-needed spotlight in this album. Though Sandeul takes the more dynamic parts and shows greater range, Gongchan holds his own and balances the song with a sweet, unstrained sound. The vocals are the clear feature of this track, as the only instrumentation for half the song is a bare piano.

Afterwards, “Pretty” picks the beat back up. It is about a pretty girl (surprise, surprise). However, the song starts with a solid chunk of CNU rapping, which is a surprise. CNU has always been the sub-rapper, but he hasn’t rapped much in previous albums. He handles the rhythm well and starts the song off with a good pace, though comparatively Baro has more nuance in his chunk. The rest of the song is as sweet and light-hearted as one would think, with the horns adding an unexpected, jazzy brightness.

A standout in the album is “Who Am I,” another by Jinyoung. Here, the album breaks away from love, and talks about self-reflection and searching for oneself. “Who Am I” matches the instrumental and electronic layering of “Lonely,” but this time with a rock-inspiration and driving guitar. There is an effective use of repetition in the song, especially in Baro’s rap, which pushes the song forward and reflects the repetition and motivation in the lyrics.

CNU surprises us again in the next track, “Drunk with Music,” which is not only his solo song, but also one of two that he composed on this album. If you never thought “sexy” and B1A4 would be in the same sentence, think again. The lyrics focus on dancing, and bodies, and — you know where this is going. The music has enough funk and flair that it borders cheesy and almost overtakes CNU’s voice in the beginning, but as the song builds, so do his vocals. “Drunk with Music” illustrates his full range, from soft, to belting, to falsetto. The track shows off CNU as the multitalented, “multiplayer” he is labeled, doing exactly what a solo song is supposed to do.

The two final songs on the album are “Road” and “Seoul.” In “Road,” the piano constant gives the song an easy, flowing feel. It’s also another example of well-placed rapping, that adds variety and helps move the rhythm. All of the boys’ vocals open up warmly on this track, making it a catchy reminisce about friendship. “Seoul” is a love song that is one part subdued, one part passionate, and a lot of parts harmony, ending the album on a smooth, funky note.

This album shows B1A4 blossoming as both vocalists and composers. They have emphasized how much of their personal thoughts and feelings they’ve put into this album, and it shows in their mature sound and lyrics, and in how well the tracks fit together to create a signature sound. Who Am I definitely sets the bar high for 2014. 5/5.