Fans of Zion.T used to songs rooted in modern R&B and hip-hop were undoubtedly thrown a curveball with his latest release, “Miss Kim.” With his newest album Mirror Ball, Zion.T takes a departure from his niche genres and pays homage to two different styles: trot and dub. 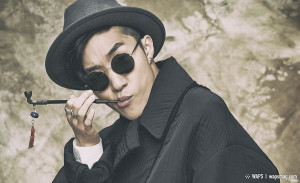 Trot is a complex genre for modern K-pop fans to pin down musically, but this classical form of Korean popular music takes root in duple rhythms from American foxtrot as well as the musical scales found in Japanese enka music. It’s common to hear today’s idols cover trot songs of old, or even incorporate modified elements of trot style for the more electronic sounds of modern Korean pop.

Trot isn’t the only style that Zion.T cites in his work on Mirror Ball. The word “dub” may bring one to the conclusion that Zion.T is using dubstep in his release, but dub is actually a style with much more history: a subgenre of of reggae music. Dub was created in the 1960s by mixing pre-recorded material, dubbing over instrumentals and restructuring the features of the music, often requiring the deletion of vocal tracks.

Combining the two styles implies that Zion.T will use trot music as a base to test out the remixing techniques of dub. With this new venture, Zion.T continues his reputation as not only an executor, but also a student of music. His desire to expand his skillset beyond a niche genre is impressive, but the execution is what really matters to his fans, and “Miss Kim” does not disappoint.

“Miss Kim” has Zion.T crooning over a duple beat likely created by an accordion. His voice is jazzy but somewhat distressed as he admits to an unseen Miss Kim that he cannot function due to his persistent thoughts of her. The vocals are strong and Zion.T puts all of the proper feeling into every lyric. The simplicity of the track leaves little room for accompaniments, so his voice remains central to the action of the song, although there are new sounds that creep in over the beat towards the middle: at first a collection of strings and then an operatic voice joins in to create more drama and urgency to the singer’s pleas. 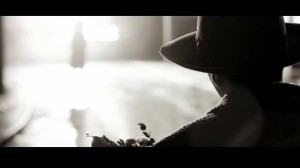 The climax of the song comes late as Zion.T belts out “It’s raining” and repeats it more gently until the music ends with the same vocals that he started the song out with. “Miss Kim” is surprisingly short. The song could have gone on forever, but wraps up quickly and surprisingly at under three minutes (as is the trend with most of the songs on Mirror Ball).

Overall, “Miss Kim” has a quirky but retro vibe due to the genre fusion. The accordion duple beat gives the song an anxious feeling that is only amplified by Zion.T’s  vocals. There’s an intentional melancholy about the music, and Zion.T vocalizes as if he’s wallowing in misery over a pitiful situation that his lover can’t seem to save him from.

It is difficult to discuss “Miss Kim” as a song without mention of the music video. The song and video do not seem like they are meant to be experienced in any way but simultaneously, as the visuals of “Miss Kim” are remarkably cinematic, drawing elements of film noir and the classic melodrama.

We see everything in black and white, and Zion.T spends most of the video either hunched over a typewriter, driving in an old-fashioned car through narrow city streets, or standing in the rain among a troupe of tap-dancers. 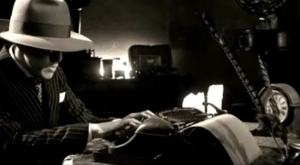 At one point Zion.T holds a bouquet of flowers for his love after spending a large amount of time preparing and primping in the mirror. However, in a later frame the bouquet of flowers falls to the rainy street, which only adds later confusion when a dry Zion.T stands on the street with the flowers as a feminine figure approaches in the distance.I believe that “Miss Kim” is rooted more deeply in the feeling of melancholy and love-related anxiety rather than a distinct plot. After all, we never actually see the face of love interest in question.

Perhaps the anxiety of the song is caused by Zion.T’s fear that his lover doesn’t return his feelings. We see him waiting and putting in a lot of care into his appearance for his supposed meeting, and we hear him begging Miss Kim to look back at him and admitting that he thinks about her and needs her to comfort him to ease his distress.

The internal conflict that Zion.T’s character faces isn’t resolved by the end, and the cinematic nature of the video leaves the viewer wanting some kind of closure to what they’ve just watched, especially since the visuals and music are so somber. But, the abrupt ending isn’t too frustrating, probably because melancholy of the video was so absorbing that my eyes and ears were fatigued by the end.

Initially, “Miss Kim” left me confused and somewhat in the dark about its purpose, but I think there’s a lot to be extracted from the trot-dub style that Zion.T presents here.

The fact that this new sound can feel so retro on the first listen and be so masterfully paired with just the right visual style was appealing and created a mystique around “Miss Kim.” The finished product feels more like a short film than a song-video pair.

While I suspect that Zion.T will alienate some of his fans with the new release, the experimental sound shouldn’t sway your faith in his ability to create songs of great craftsmanship. The adventure in musical identity is definitely worth a try with “Miss Kim.”