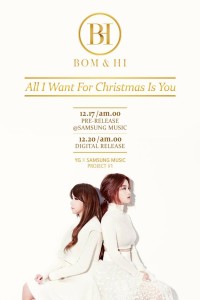 YG Entertainment is the latest K-pop company to cash in on the holiday spirit with their new sub-unit B&H.

The first mysterious teaser popped up on the 12th and hinted creepily at a female duo. The second teaser revealed Park Bom as half of the unit and confirmed what many fans had speculated. The third and possibly final teaser was uploaded today and announced that Lee Hi would be the other half of the unit, raising anticipation for the two singers.

Although B&H will not be singing an original song but rather a cover of Mariah Carey’s “All I Want For Christmas Is You,” the teasers indicate that the sub-unit will veer into new territory with a darker Christmas-related theme.

Like the sub-unit? What did you think about the eerie teasers?