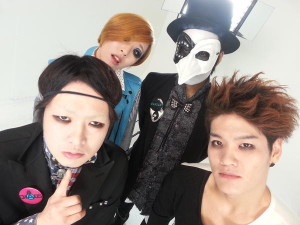 We are back with another edition of Indie Gem! Our feature this week is GoGo Star, a punk band with a heavy disco influence. Formed in late 2007, the band consists of guitarist and lead vocalist Lee Tae-sun, bassist and sub-vocalist Kim Sun-ah, drummer Ali, and FX-DJ-extraordinaire Lee Yeon-seok.

Imagine what a band that calls themselves disco-elec-punk sounds like. Then multiply their talent by 100. I’m serious. Do it. Now you’ve come close to GoGo Star.

Let me be real with you for a second: When a band calls themselves “electronic punk,” I usually assume they could also easily be pop. That’s not a bad thing, but in these mash-ups, it is common for one element to get pushed to the wayside, and it’s usually the more polarizing punk. That is not the case with GoGo Star.

The band meshes punk, disco, and electronica in a way that makes sense. They will make you say, “Disco punk, where have you been all my life?!” Repetitive electronic beats mix with stripped down, raw instrumentation and vocals to drive energy, rather than put the listener in a trance. They also creatively stretch the FX: breaking them down, much like the music from their instruments. Despite the dance rhythms, it feels more appropriate to let loose and thrash around to their music, and maybe climb some walls like Tae-sun while you’re at it. The band brings great energy to their live performances, to the point where Tae-sun claims he doesn’t even realize what he’s doing.

But GoGo Star’s mastery lies in how much musical texture they give their songs, without them being inconsistent. Each song has its own atmosphere, yet each section brings a new take to the soundscape, signaling that a lot of thought and careful construction went into each note. They possess the ability to create a song that is interesting to listen to, without sacrificing raw energy and spontaneity. Check out this performance of earlier song “Chiki Chiki,” off their album The Last Show, which shows how the band keeps punk alive not only in sound, but also in energy. (2:56 shows a sample of Tae-sun’s normal antics.)

“Black Comedy” is one of the band’s most recognizable songs and MVs, off of the same-titled album, though it’s inexplicably not part of their official YouTube. It starts aggressive right off the bat, with pounding bass, synth, and dog barking sounds, which lead into a fast song that never slows down. They utilize the electronic elements to create an unsettling atmosphere, filled with sounds that I can only describe as spaceships, wooshes, and carnival screams. The MV adds to the circus atmosphere, exemplifying the band’s earlier signature style that borders on goth. The song is an interesting experience, but one that holds the listener through the steady upbeat and variety of vocal layering.

Their next album, Highlight, toned down the macabre sounds and look, and refined their musical mixing. “Runaway” was the title track from this album. It still retains a unique atmosphere, but one that focuses on carefully timed sounds, and play between the guitar and repeated electronic thread. Tae-sun’s voice is more restrained, stretching his upper register and mechanically distorting it. Sun-ah doesn’t do any of her fantastic shouting, opting to support Tae-sun in harmony. (And if you do get your hands on Highlight, I really recommend track “Touch Touch” as well.)

Earlier this year they dropped “God of Snowy Fields,” which is perhaps their most toned down single thus far. There is still the driving drum beat, but the song takes longer pauses in the manicured electronic, reflecting its melancholic lyrics. Tae-sun’s voice is low and subdued, with Sun-ah’s harmony no more than a whisper. Out of this, however, comes a beautiful MV that deals with their past image and shows off their music playing.

Most recently, GoGo Star uploaded Sun-ah’s project, “Black Heart.” BlackHeart, both the group name and single name, features Sun-ah and another singer Min-gyung. The song mixes disco and punk as GoGo Star does, but with more emphasis on the disco. It’s really nice to see Sun-ah’s singing take more spotlight, as she exercises the fullness of her range and vocal qualities. Min-gyung brings the lower register to the duo. The video is fun and colorful, with a playful spy aesthetic, taking full advantage of Sun-ah’s fashion designer background. Even Tae-sun has a funny cameo and rocking guitar solo. While I’m still hoping GoGo Star will drop another album soon, BlackHeart is a welcome addition to their extended family.

I hope you’ve enjoyed this edition of Indie Gem, and as always, let us know what you think!