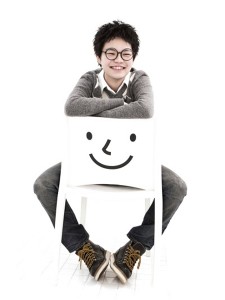 Welcome to another K-pop Indie Gem! This week highlights BrotherSu, who’s signed under RealCollabo alongside others like Ra.D and Cheeze. His real name is Kim Hyung-soo, and he occasionally goes by Kefcee. He was first heard in 2009 when his remix of “Winter Wonderland” appeared on RealCollabo’s Christmas Card. His first two singles, “It Was You” and “You Got Me,” were released in 2010. From 2011 through 2012, he appeared on quite a number of singles and produced and wrote for artists like Crucial Star and Lovey. It wasn’t until 2013 that he released his first full-length album, Paper, alongside several features in other artists’ tracks.

BrotherSu’s music falls mostly under R&B but by no means is he limited to it. He mixes it up with instrumentals that sway from jazz to more popular sounds. He sings and raps when necessary, even though he recruits the help of others, in the spirit of RealCollabo’s artists’ frequent collaborations with practically any other artist. Also of interest is the artist’s Tumblr page. Although updated infrequently, BrotherSu has shared some background info on some of his songs. He’s mentioned associations with hip-hop artists — in particular Zion.T, for a good introduction into hip-hop — and he’s talked about the inspirations behind his music. In interviews, he’s singled out f(x) as a group with interesting music, and he’s named Yoon Jong-shin‘s emotional lyrics as one of his favorites.

His name made an appearance in our recent Roundtable of Best Indie songs of 2013 and with good reason. Below are choices from his albums, singles and other features.

“You Got Me” is BrotherSu’s second single. The song plays with breathy tones and a good layering of sounds — from acoustic guitar to atypical percussion, and the pointed incorporation of strings. The large amount of pure sound happening is a more than adequate accompaniment to the idea of love expressed. The effect is catchy and an excellent example of a song that doesn’t require powerful vocals to leave a mark.

Mad Clown‘s “Basil” featuring BrotherSu is from 2011. BrotherSu’s parts hold together Mad Clown’s raps, lending a wistful and melancholic tone to the song. This is especially apparent in the way he both starts and ends it. His airy contribution contrasts Mad Clown’s spitfire and concentrated raps, changing up the song and making it the best it can be.

“Why Are You Being Like This” featuring Swings is the first full song on Paper. The album took three years to make, with BrotherSu helming the entire track list. Label mates Dal Chong-e of Cheeze and d.ear aided in production. The song’s vocalizations and upbeat nature are reminiscent of BrotherSu’s second single. Swings’ rap adds a rougher touch but maintains the same wry attitude from BrotherSu, allowing for easy melding of the two parts.

“It’s Because I’m Shy,” featuring Dal Chong-e from Cheeze, brings some swing and jazz to the album. This song follows the above one, and consequently aids in conveying the storytelling nature of the album, as intended. The starting restraint is lovely, and this leads into a hushed song that stays wonderfully medium in volume. The song is carried out like the sharing of a secret, with hums and bits of scat, while all the while staying soft and shy, like the title indicates.

Fifth on the album, “She Likes Me,” adds rock elements with its interruptions and hard guitar riffs. The song displays some of BrotherSu’s rapping abilities, and it shows how he can add additional edge and rhythm to his vocalizations. The entire song is a celebration fortified by the revelation, “she said she likes me,” and it seems fit for a musical scene.

Last on the list is the seventh song on Paper: “Different Star,” featuring Lovey. The song is largely repetitive in its lyrics, but the conversation between the two parties works so very well together. There’s something similar about BrotherSu and Lovey’s voices that makes their interaction work well melodically, without being boring.

If there’s something to be said about BrotherSu’s music, it’s that it possesses an additional sense of restraint about each song; it’s as if each part were picked with considerable caution, with the goal of achieving a ‘just right’ effect. That type of thoughtfulness comes through in how each song is successful in leaving the listener with some type of feeling, regardless of the lyrics. BrotherSu’s voice has the capacity to fit into a number of molds, and that in combination with his interest in a number of genres can only bode well for any future music he partakes in.

What are your thoughts on BrotherSu? Any potential favorites among his music? Please do comment with your thoughts and keep an eye out for our next K-pop Indie Gem!