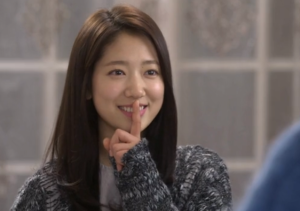 I have very conflicting feelings about Heirs right now. On the one hand, it’s finally going somewhere, but on the other hand, it took us fifteen freaking episodes to get there! Why, just why? Heirs could have been so much better had it introduced these events earlier.

I’m also conflicted about Eun-sang and Kim Tan’s relationship. I know that they’re teenagers in “love” but the show hasn’t adequately shown us that. This may be due to the lack of chemistry between Park Shin-hye and Lee Min-ho because even though we’ve spent less time with Hyun-joo and Kim Won, their love is much more believable than Kim Tan and Eun-sang.

Yet, despite my skepticism about their feelings for each other, Eun-sang and Kim Tan’s individual scenes have been actually — dare I say it? — moving. The ending scene with Kim Tan breaking down was rather sad to watch.

But this is a drama and of course they’ll get together again so I’m not holding my breath. Heirs was never able to get me that invested in its leads.

Much more interesting is development on the brother-brother-father company war. How brilliant was that scare of Kim Won losing his position? Dad may be a crappy father but he sure is shrewd. I’m definitely looking forward to Kim Tan and Kim Won working together again in the future. 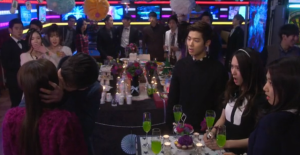 Also, on my list of things to happen in the future is the Rachel – Hyo-shin couple. After the kiss, I knew the show was going to take this path. And I’m glad it did. They have a great rapport and maybe Rachel can talk some sense into Hyo-shin’s parents. She is definitely a force to be reckoned with when she wants to be.

The only thing I dislike about this side-plot is that Rachel’s responsibility will never be addressed. Throughout Heirs Rachel has constantly harmed and caused problems for Eun-sang. Instead of Rachel realizing that what she did was terrible, it seems as if the show will try to redeem her by pairing her with Hyo-shin.

The reason I dislike this is because Rachel will never learn that what she did was wrong; the writers won’t let her come to that realization. Instead, they’re just going to have her conveniently move on and stop terrorizing Eun-sang, because of a boy and not due to her own agency. I think Rachel deserves better than that. Heirs, please prove me wrong on this.

Although these two episodes were a big improvement for the show, it still feels like too little too late. Had these developments occurred before, Heirs wouldn’t have been so insufferable. But maybe these ending episodes are the K-drama version of a hail mary and Heirs might end on a high note. Anything is possible.