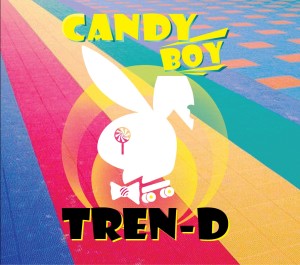 New five-piece girl group Tren-D (pronounced “trendy”) from Whites Entertainment has frolicked onto the scene with their debut single and MV, “Candy Boy.” The quintet is comprised of members Ta-mi, Ru-Ru, EL-LY, Na-Yul, and Dan-B, the first letter of each spelling the band name as the ladies follow in the acronymically-blessed footsteps of their K-pop forbears. But it’s not just naming conventions that Tren-D cribs from their sunbaes. There’s a dollop of disco dance-pop from T-ara and a scant spoonful of Kara-brand, J-pop friendly, energetic synth in their sound; plus a dash of cutesy-cum-weird from Orange Caramel and a pinch of girlish pluck a la AOA Black in their image. What the band doesn’t take from its seniors, though, is the ability to make a musical impact. Tren-D is an attenuated combination of its betters. The MV helps to compensate for the lack of sonic pull.

Their first effort, “Candy Boy,” is a somber, existentialist meditation on the Sisyphean efforts of a juvenile, male lollipop-vendor to make his monthly sales quota at a dental convention—just kidding! The song is an effervescent confection about a girl beseeching the boy she has her eye on to be her inamorato. Pretty standard, pneumatic bubblegum pop fare. An energetic and cutesy electro-pop tune helmed by girlish vocals, with heavy disco and Eurobeat influences, “Candy Boy” has got a catchy hook, an accessible sound, and enough aegyo to make a basket of kittens look like a conference of cynics in comparison. It features a sufficient number of K-pop tropes done well enough to be adequate, but, sounding like the lovechild of Kara’s “Step” and T-ara’s “Lovey Dovey,” doesn’t offer up anything we haven’t heard before or particularly memorable.

The song opens with a few industrial whistle/electronic tics and distorted vocals, but things start in earnest fairly quickly, with a galloping disco beat dropping, ushering in the full, high-energy, synth-drenched instrumentation. A simple melody allows other elements—mainly the vocals and synth accents—to take the spotlight, which is a good thing because they, along with the beat, gift the song with whatever dynamism and ebullience it has. The hoots, hollers, squeals, and call outs provided by the band add some fun. Note that the percussion begs for the listener to do some sort of hop step dancing (perhaps shuffling, like in the “Lovey Dovey” MV?). The ladies take care of this in the video, but it never hurts to ensure that the job gets done by moving your feet in your own living room, should you feel the need.
[youtube http://www.youtube.com/watch?v=NkgLQq_fx3o] The MV takes the energy and fun of the song and amps them up a notch, so, at least the performance art version of “Candy Boy” leaves more of an impression than the tune. Tren-D members turn their frowns upside down by gallivanting about town in this vignette that wrings out that last bit of carefree summer still hanging around until the weather turns cold for good. Things start out in a comic book motif, as the ladies finish up dance practice, elated that they’ve finally nailed their routine. But as they high five, their manager gets some bad news by phone. The group eavesdrops on the phone call and is deflated by what they hear. Then Ru-Ru has a “eureka!” moment: she gets her buds to go skating, a grade “A” worry-melter. They skate for a while by the riverside, then break out into song and dance, which is only natural. (That’s why I always carry a headset mic when I go rollerblading.) It’s here where they first hit us with their signature hop step dance for the song, a move Bad-era Michael Jackson popularized that I can only describe as a half Charleston. 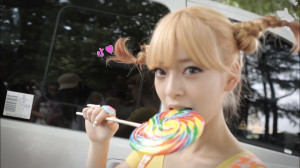 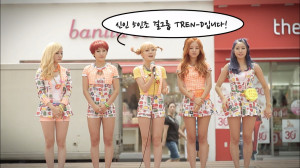 The ladies then take it to real city streets as groups like Wonder Girls and Crayon Pop have before them, performing while walking down arteries congested with pedestrians and shoppers delighted by the unexpected show. They stop at an intersection of walkways to put on a mini-concert for passers by that become standers around. They move the routine to a large stage, still in the middle of the busy shopping district, going into the crowd to teach their dance and spreading the fun like the best flu ever. They make a name for themselves by cutting their teeth on the streets (which sounds grittier than it is, literally and figuratively). A photojournalist takes their picture and puts it in the paper, which their manager finds the next day, much to her shock. The ladies see her astonishment and greet her with self-satisfied grins.

Skating by the river and partying in the streets aren’t the only sources of fun in the video. The clothes, in day-glo neon, accented with cool accessories and hairstyles, convey a delightfully weird summer frivolity. (Are they sure they didn’t mean to release this video a month or two ago?) Ru-Ru sports Pipi Longstocking pigtails, while EL-LY keeps her hair lilac purple. Na-Yul dons a necklace made of a cassette tape, and everyone else wears chunky, geometric jewelry. Laidback looks with iridescent shorts, t-shirts, jerseys, over-alls, and skirts are traded with starburst lederhosen, a mini-dress with multicolored lip prints, cute, coordinated sweater sets and other uniform-like outfits spiked with crazy patterns and colors. Perhaps their off-the-wall clothes represent the possibility that they may go the Orange Caramel route in the future, becoming a group with the self-awareness to recognize the ridiculousness of it all and a sense of humor, which pushes boundaries with oddness and doesn’t take things too seriously. 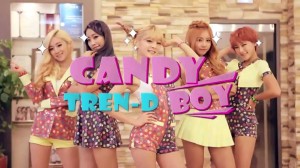 Tren-D’s inaugural effort is better seen than heard—or at least more memorably seen that heard. While the song is the same type of girlish, synth-laden electro-pop that dominates the airwaves, and a tad bit boring, the MV is a fun romp keeping the spirit of summer alive. Under-promoted and nothing special musically, “Candy Boy” may go as quickly as it came, but Tren-D has exhibited a spunkiness and comfort with eccentricity that may hint at more interesting things to come.