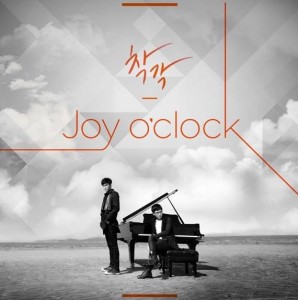 Almost every single K-pop album, even the mini-albums and EPs, has at least one ballad. Often it is one ballad too many — the songs that sell the albums are usually the dance tracks and the ballads can sometimes feel like autotuned filler that we know could not be adequately performed live in front of an audience. For this reason, Joy o’clock’s decision to debut with a ballad is an unusual choice, and upon first listen to “Delusion” (also translated as “Illusion”), I girded myself to be bored to brokenhearted tears by just another sad love song.

The song is a lyrical and haunting narrative of a man’s regret after a breakup. In that sense, the track is very standard fare. Where it departs from the norm is that it is composed by Joy o’Clock’s two members Dason and Yong-hyun, and it’s clear from the composition that they are real musicians with a classical interest in the music itself. This is most evident in the strong piano accompaniment to the standard ballad strings.

This is a song and music video that will reward the patient listener. While they aren’t the lookers we’ve come to expect from male groups like EXO, Vixx, Super Junior or even H.O.T. (when they were still H.O.T.), they more than make up for this by being genuinely capable singers. The kind of singers that I would pay to go and see in concert just to hear their voices, even if they couldn’t sing or didn’t look like Choi Siwon when they took their shirts off. Their voices have none of the thinness that we’ve come to expect from K-pop hotties but are instead very fully and complete with an admirable vocal range, reminiscent of 4MEN.

The style of the song itself is reminiscent of old school 1990s R&B when Boyz II Men owned the airwaves. Even the music video recalls an old classic by Boyz II Men, “Water Runs Dry.” In that video, the Boyz sing about the end of a relationship while standing on white sand, the colorful sea nowhere in sight. It’s not a particularly subtle interpretation of what happens when the water runs dry, but it still managed to be affecting. On this waterless “beach” (desert), they are joined by a small string orchestra which has the intended effect of highlighting the particularly sorrowful cello in the song:

Joy o’clock similarly situate themselves in a space that is evocative of sand and sea, this time with a very sizeable grand piano. This set is spliced with scenes that purportedly show the heartbreak of a man and a woman who have parted ways, and the man looks especially torn up by the whole thing. Like the song itself, I expected to be bored by the video and was pleasantly surprised by the ways in which it intrigued me, even though it didn’t do anything particularly special. The acting is high quality: the facial expressions from the man are believable. Again, this isn’t a Super Junior or EXO video: it’s not flashy, there’s no dancing to speak of, and I think one of the guys compliments his all black outfit with Converse All Stars. But the production style is chosen to use this as a strength, and it works. Everything seems very human, very down to earth, and very relatable. We’ve all been there. This is a feeling and a duo that maybe we can identify with. 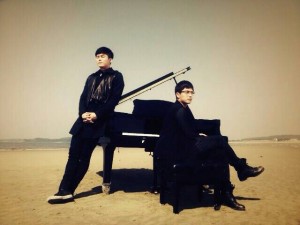 Despite its plain mentality, the video’s cinematography is beautiful, and the colors of the beach scenes are rich and engrossing. The director aimed to capture yellows wherever they existed, and this created a certain visual continuity of the before heartbreak and after heartbreak scenes — even when going from beautiful sunsets to a grey day on the beach, there is this background, a certain color, that refuses to go away, just like the man’s feelings of love for the girlfriend he’s lost.

Overall, Joy o’clock has put their best foot forward, although perhaps not quite joyously. With such a strong start, they’ve raised the bar for future releases. I am very curious about their capacity for expanding beyond basic balladry. But even if they can’t, I think we can fully expect to see them on a drama OST very soon.