A.T Brings A Refreshing Dose of Quirky Creativity with "Don't Be" 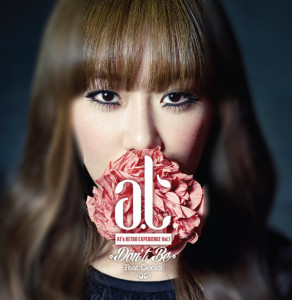 Behind all talented vocalists are many helping hands, and A.T has made her living working behind the scenes with some of the most well-known singers in the industry. She’s coached IU and sung guide tracks for the likes of Lee Hyori and Baek Ji-young. With a powerful voice and obvious skill, A.T is more of a hidden gem.

In a similar fashion to ballad artist K.Will, who was also a vocal coach and guide vocalist before his debut, A.T has mostly stayed out of the limelight. While she debuted under the stage name tomtom — yeah, just like the GPS brand — in 2010 with single “Top Girl,” she didn’t make it on the radar and remained unknown. Later that year, she collaborated with other well-known vocal powerhouses Navi and Ali for veteran artist Shin Seung-hun‘s 20th Anniversary Showcase where they performed remakes of several of his biggest hits, such as “The Unwritten Legend.”

Then, after a little over a year with no new material, she returned last year with a new stage name — which is supposed to stand for “After tomtom” — and a new single “Slowly.” She then featured on Immortal Song 2 with a fantastic performance of “Seabirds.” And now, she’s returning with a new track “Don’t Be” featuring rap duo Geeks and a cute, creative music video concept.

The entire music video is a live-action YouTube video, which sounds weird unless you watch it. It’s basically a video in a video but with people playing it out as though they were the video. The video consists of three people, two guys and a girl, and it all takes place on a huge trampoline with the audience at a bird’s eye view.

Then, as we move into the first verse, the signs disappear, and the girl and the first guy reappear. He gets down on a knee and hands her a bouquet of roses, but she rejects him. He follows her around the trampoline, which goes with A.T singing about him calling her at 5 A.M. to know where she is and not out of worry but out of suspicion.

Then we move into the chorus, and the signs reappear with more literal interpretations of the lyrics. She holds up a sign of the lyrics “I don’t know” then an X when A.T tells him to not ask her to change. By the end, we get the three people returning each with a box filled with balloons that they release.

The signs continue, this time of several beers clinking together to match up with A.T singing about going out with her friends. Then we get their actual text messages. The guy holds up a bubble that reads “Where are u?” and she responds “Don’t be.” So it doesn’t really make sense, but we get the message: she doesn’t want him to be all clingy or to doubt her. 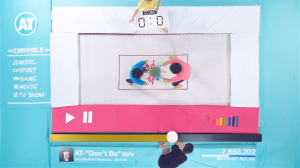 Randomly, the guys then start boxing with the girl keeping score. Instead of actually throwing punches though, they just do flips and cool acrobatic stuff as hand-drawn animations appear over them, and she scores them according to how good they are. It takes the conflict spoken of in the lyrics and lightens it up. After declaring the winner, the music video ends with them throwing confetti everywhere and just jumping around and having fun.

While the actual events in the video aren’t a plot, there is so much detail put into the concept of the music video that it’s obvious that they are going for a quirky cuteness. The girl in the video jumps to press the huge play button over the video, and at the end there’s a replay button. There’s a sidebar that lists channels, a view counter that reaches up to 999,999,999, and even a guy painting the scrollbar at the bottom. It’s all of these details that make the music video so great.

The song itself has a playfulness to it that belies the lyrics and their moaning about clinginess, and it makes Geeks’ feature spot on since they take a more lighthearted approach to rap. What stands out though is A.T’s versatility, which is evident in this song. She sounds different in each of the songs that she has sung — “Top Girl” then “Slowly” and now “Don’t Be” — manipulating her voice to match the sound while still maintaining her distinct style. It really proves her skill as a vocalist.

And while this music video could have had a real plot and interpreted the lyrics through it, this concept suits it better. Instead of going for a literal rendition, it capitalizes on the light, happy nature of the music, which has an almost retro feel to it. It may no longer be summer anymore, but with this cute and quirky music video it seems that A.T still hasn’t left the fun of the season behind, and I’m totally okay with that.