Anyone who heard G-Dragon’s One Of A Kind (OOAK) EP earlier this year would be forgiven for doing a double-take upon hearing his latest offering, Coup D’Etat. GD’s second full album returns to the darker undercurrents he hinted at in 2009’s Heartbreaker, and is much musically richer and interesting to listen to as a result.

It’s rare that GD does a slower song. His rap in Coup D’Etat plays with especially long and drawn-out vocals, and the effect is a menacing whopper of a song that could fit nowhere else except for an introduction song. It’s for a long-buried desert king tearing himself up from the mud and silt of the past, i.e GD breaking away from his previous musical incarnations, as per what his MV suggests.

It’s not a song people are going to dance to, or sing to when they want a pick-me-up. It’s psychedelic, and as Sahar established in her review, absolutely mindblowing when listened to with the MV. Just don’t listen to it without having seen it with the video, because it won’t make much sense.

At KCON in Los Angeles this year, this song was premiered, and was it hot and fierce! Fancams of the performance show how good the two rappers were at selling this song live on stage, and the crowd certainly thought so as well.

The song begins and ends with sampling from a Korean folk song of the same name, and it plays continuously in the background for the rest of the song, punctuated by wailing sirens. Missy Elliot spits rhymes smoothly and easily (I’m going to cringe whenever I hear any girl group rappers after this), and it’s an extremely well-done collaboration they have going on here that brings out the best in both rappers. GD always had a bit of a nasal sound to his rapping, and he lets go of that here, bringing to the table a distinctly different sound, older and harder (this is most obvious on lines that he takes from previous songs such as “Crayon”). Eclectic and strange, this is a track that puzzles the senses and makes the most sense performed live.

Having listened to the collaboration, the solo G-Dragon sounds kind of lonelier and… lacking the spark provided by Missy Elliot. Having to rap in the same tone, about the same volume, with the backing track having that same sampling portion on repeat is just hard. It’s not bad, but the sparks Missy Elliot brings in her collaboration really make the track. 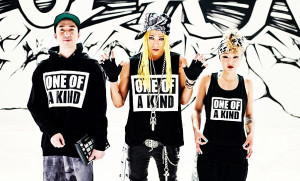 The trend of having songs that don’t quite fit any norm a typical K-pop listener will know continues with “R.O.D”. The instrumentals used sound bright and cheery, but odd bits of sound thrown in here and there, coupled with GD’s serious delivery, make it an extremely discordant listening experience. Listening with the lyrics in front of you is highly recommended, because it makes much more sense with them. Believe it or not, it’s a love song, though it’s supposed to capture the confusion of a man in love. That…kind of explains the odd song. Kind of. Just let it grow on you over time. Oh, and it’s lovely when Lydia Paek (previously seen in GD’s One Of A Kind MV) sings, but the lyrics are cliche. Nevertheless, their voices make a good counterpoint with each other.

GD returns to familiar territory with the song Black. He has always done well in songs like this, with quiet instrumentals, easy rapping and a lovely female voice singing the hook. His last album’s “Without You” and “Missing You” are examples of this. It’s rare that we get to hear such an introspective, quiet GD. The restrained despair is a clear callback to Big Bang’s “Blue”.

Jenny Kim inflicts a dark despair into her voice that matches fantastically with GD’s version and the overall theme of “Black”, which is presumably of a relationship ending, or fading to black. Her voice is unexpectedly suited for this track, and helps make this track an easy standout on the album.

“Who You” is another more pop and more mass-market friendly track on the album, and is another marker of musical development for GD. Believe it or not, GD didn’t really start incorporating guitar riffs into his songs before Big Bang’s Alive last year.  It was always more of piano and electronic elements. This kind of mixing between piano, guitar and drums is something we first saw him exploring in “Blue” last year, and he perfects it in “Who You”.

GD’s love songs have always had a tendency towards the tortured, despairing love thing, and the easy, spaced instrumentals in “Who You” help to give a bit of restraint and brightness to the song. Although still about the theme of hatred and love, “Who You” is still a poppy song that mixes sweetness with the upset. His solid vocal performance doesn’t hurt any either. Hopefully this is a route GD keeps exploring!

It strikes me that if you put all the songs on play, the introduction songs would be obvious. Not immediately, maybe, but eventually, because of the extremely heavy beats and drawling, more threatening voice GD puts on. A vibrating, pulsing club song, “Shake The World” is reminiscent of both “Michigo” and “Coup D’etat” when it goes into the later verses. The phrase “Since I was BORN” (with verbal emphasis on the “born,” hence the all-caps) keeps punctuating the verses. On its own it would be okay, but after the already heavy Coup D’etat and Niliria, this repetition of GD’s ability to rap and the rule the world seems a bit redundant.

Michigo was written for a marketing promotion with messaging app LINE.  The music video and song was supposed to be only accessible through LINE. But the buzz was so great that YG decided to make a music video and release it back in April 2013 (Here’s the review) for the song. And finally, five months later, we have it on CD. It’s as crazy and head-thumping as ever, obviously not very fitting with the rest of the mood of the album, but always good for a spin.

Crooked is, hands down, the best track on the album. This is the rare song where the lyrics, the voice and the song line up perfectly to really shine. To top it off, the music video hits the mood perfectly:

Again, this is a song about love, where a man who has been abandoned by his lover goes crazy. Crazy isn’t a new thing for GD to try on, but here he matches it with a rock element in his song that amps up the crazy and adds an edge of recklessness. GD has never taken on such an element in his songs before; the closest would be “Wings”, the song he wrote for bandmate Daesung on album Alive.

The edge of vulnerability that shines through, for instance with GD crying in the bathroom, dovetails well with his voice. If you make a list of top idol singers, GD won’t be on the list, but maybe he should because the balance he hits here between sad and angry is just right. Anyone who has experienced being so maxed out in life, stressed to the point where you just don’t care anymore what you do, will find GD hitting a heavy emotional chord here.

On “Runaway”, GD sings about escaping a former love, continuing the vaguely rock element GD brings to “Crooked”. The inclusion of the word “Yahoo” looked really weird on the lyric sheet, but luckily it worked out well in GD’s voice, lending a carelessness that the song needs. This is GD lighter and crazier than he was on the previous tracks, and it’s a much-needed break after all the heavy emotional stuff the earlier tracks covered. 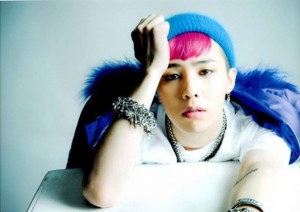 GD CROONING! Definitely the lightest and happiest track on this album, this song sees GD alternately crooning and breaking out into excited song about his lover’s… hair… mole… hips… and ankles. Ladies, now you know what the GD looks out for.

It’s GD romantic and sweet like you’ve never heard him before, madly in love. If anything, it showcases how versatile GD can be with regards to his… voice. What were you thinking of?

The heavy beats, if nothing else, should indicate that this is an intro/closing track (it’s a closing track). The lyrics here save it from being formulaic, saying that

You can be anyone
You can do anything if you dream
I said, You can do it too man

He’s encouraging people to work hard and pursue their own dreams; not to be like him but to be themselves.

Listening to this album means alternating between being puzzled and being swept away, but always fascinated. There’s so much experimentation going on in there, and it’s a sign of GD’s maturity as a singer-songwriter that he manages to sell every track, even though tracks like “R.O.D” do test the limits of what listeners will buy. Perhaps that’s why “Black”, “Who You”, “Crooked” and “Niliria”, the more non-experimental songs are chosen as title tracks. The only worry is that some lyrics and beats will become too formulaic (honestly, how many times can you listen to someone do a rap track talking about how rich they are/how well they can rap?) Either way, the album is definitely worth a listen, and a valuable marker of GD’s artistic growth over the years.