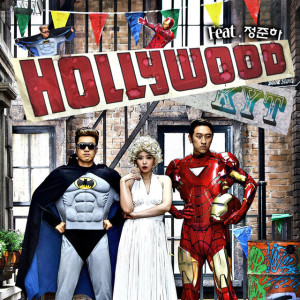 Koyote is one of those groups that seem timeless. Debuting in the late ’90s with three members — Kim Goo as rapper, Cha Seung-min as male vocalist, and Shin Ji as female vocalist and now the only remaining original member — Koyote came onto the music scene with catchy dance-pop hits.

Shortly after the release of their second album in 2000, came the entrance of current male vocalist Kim Jong-min as Cha Seung-min was returning to the US to study abroad. Despite the lineup change, the group maintained considerable popularity.

But after their third album, rapper Kim Goo was arrested for possession of ecstasy early in 2002 and left the group. Koyote’s image took a big hit from the scandal and went on hiatus until the end of the year when the two remaining members decided to promote as a duo. The two managed to repair the damage and regain public favor, and the group soon returned as a trio when Baekga joined them as rapper in 2004.

The group’s popularity increased tremendously with Kim Jong-min’s regular variety show appearances and Shin Ji’s acting until 2007, when Kim enlisted in the military at the height of his variety show popularity. His return to the entertainment scene in 2009 proved to be a difficult one, and in the same year Baekga was diagnosed with a brain tumor and was forced to take time off for surgery and recovery. The group’s popularity hasn’t been the same for some time. However, the group still continues to make hit music.

After releasing a ballad at the end of June, the trio has returned with disco-inspired dance number “Hollywood.” Released on July 25, the music video pays homage to the American film industry with references to Marilyn Monroe, Batman, Ironman, and more.

Right off the bat, the first thing that strikes me is the missing Jung Joon-ha. The comedian who is listed as a feature may have limited vocals — he has three lines total — but one would expect that he would at least make an appearance in the music video, especially since it’s supposed to be carefree and silly. It’s a disappointment that he doesn’t, and that could have added to it.

While the music video isn’t the funniest, it is fun, which goes perfectly with the song itself. The lyrics are about going to Hollywood to have a good time because love is gone, and they have not a care in the world. The lighthearted approach really comes through in the interactions between the members, particularly between Jong-min and Baekga.

The styling also really capitalizes on that humor. The obvious would be the costumes: Shin Ji as Marilyn Monroe and Catwoman, Jong-min as Spiderman and Batman, and Baekga as Ironman and (who I believe to be) Inspector Clouseau. At first, I thought they could have expanded and covered less comic book superheroes in favor of other Hollywood icons, but in a way it makes sense because the industry is currently dominated by all of these comic book franchises (and probably will continue that way for the next five or six years). It seems as if there is always a DC or Marvel film in theater these days. With that fact — coupled with the humor alone that comes from dressing up as a superhero — in mind, their choice makes sense. 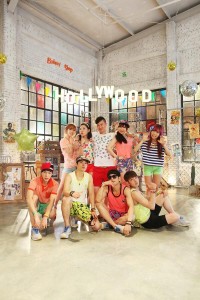 And while they are entertaining, I find their other styling choices even better. Consisting of neon colors, overalls and hilariously placed visors and bandanas plus too many accessories, the outfits really show the whimsy in the track. I particularly love their tacky track suits.

The best part would have to be the choreography, though, because it doesn’t take itself too seriously either. It suits the music as it employs lots of angled arms, pointing, and other moves that people associate with disco, but it also uses other moves that add to the humor, such as head bobbing, exaggerated thrusting, plus a train track chugging dance move that I love.

Jong-min and Baekga fully embody the carefree silliness throughout the music video. Shin Ji, though, seems a bit awkward. Since her voice carries a considerable portion of the song, she makes a lot of appearances so her awkwardness becomes more apparent because of it.

The song itself is great. Fully embracing the disco genre, it has strings, bass, and funk-influenced electric guitar plus a fun dance break. Jong-min’s voice suits the musical style more, but Shin Ji brings in the flavor of K-pop, making for an even balance. Baekga’s rap makes the song fun and modern, melding in with the vocals.

While I wish that they would have done more than just dance and prance around in costumes or that Jung Joon-ha would have made an appearance, I don’t really have many qualms with the music video. It suits the song and makes for a fun dance track. It’s nothing too over the top nor is it too plain; a great song for Koyote. Now, I just need an album from them.