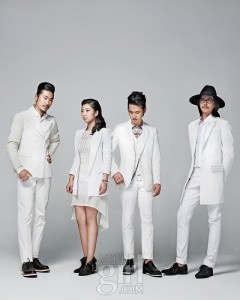 This week’s K-pop Indie Gem brings you Goonam, short for Goonamguayeoridingstella — the first is much easier to say, right? The group’s primary focus is a duo: guitarist and vocalist Joh Ung and bassist and vocalist Eem Byung-hak. Joining them on stage are drummer Park Tae-sik and keyboardist and only female Kim Na-un. The rather lengthy group name means “old man and woman riding in a Stella (old Hyundai car),” a memory especially prominent for guitarist Joh Ung.

The group has been steadily getting their name out there internationally, taking part in The Creators Project‘s Seoul stop in 2012 and the 2K13 Seoulsonic North American tour, making stops in California, Texas for SXSW, Rhode Island, New York, and Canada. Goonam was also able to bring their jazzy rock out to the United Kingdom as one of the artists for the 2013 Korea Rocks tour, alongside Galaxy Express, Apollo 18, and Gate Flowers.

The group was first formed between Joh Ung and Eem Byung-hak in 1997, and they fooled around until 2005, when music became something more serious and potentially productive. Since then, they’ve released two albums — We Are Pure in 2007 and Woojung Motel in 2011. They’ve contributed to the 2008 Han Dae-soo tribute album, Give Me Some Water, and the 2012 Seoul Seoul Seoul compilation album. Their intentions are to put out another album later this year.

The music that the group makes is very easy to listen to, exchanging melodies with vocals in lengthy, relaxing pieces, but not so calming that you don’t want to move to it in some form. The spacey impression of their music is assisted by the variety of instruments and effects used — usually in an unexpected way — and it contrasts sharply with when they play their harder music. There aren’t any long guitar riffs or blasting vocals; no, here we have usually softer vocals with strong beats and addictive melodies. Live performances with long hair, odd fashion, and without shoes make the group, at least the frontmen, look like hippies, adding an element of fun to their performances.

An aspect that’s really great to hear about the group is the difference between the live performances and audio for their albums. It’s expected that when a band performs, there’s some disparities between the live sound and what you get in a recording studio. But because of some of the instruments chosen for the recording, the live version end up being staunchly more rock in nature, filled with much stronger beats for even the more mellow and strung out songs. It speaks to how you really need to see a band perform to get the full experience.

First up is a live performance of “City Life” from the group’s first album, We Are Pure. The song live is noticeably harder with in-your-face beats and guitar in comparison to the actual track, but it’s still enjoyable. The song is on the harder side of the rock that the group does, and it’s a delight to hear.

“Korean Language” from We Are Pure. The entire song is a dreamy bundle fueled by rhythmic clacks to keep beat. The reverberations of some tones end up colliding with one another, almost in a cacophonous manner, but not so prominently that it makes for a painful experience. Instead, that helps to elevate the dreamy state of the song by adding the jumbled sense.

“Shadow Dance” is from Goonam’s second album, Woojung Motel. It fuses some more electronic sounds to complement the steady rhythm. Vocals are present, but limited and not as outstanding as the guitar parts. The entire song is an example of the softer style of the group that plays with tiny variations in pitch to alter the melody in soothing and interesting ways. The low-key nature of the song is fitting for its title: it’s calm and unobtrusive, staying in the background until the end, almost like the dance breaking free. The music video complements that idea with the mostly dark lighting and sparkly lights, effectively creating silhouettes.

“Long and Healthy Life,” from Woojung Motel, is on the slower side, displaying more soul and funk vibes with the limited, by comparison, sound. The result is a lulling track that picks up more only near the end without releasing its hold on the tranquility.

Off of Woojung Motel, “Jang Dan” has its highlight in the beat, in the little taps that grow in complexity throughout the song. It lends itself to a very gradual buildup as more and more sounds are incorporated. The vocals and the addition of drums near the end both give the song a more folk-like feel due to the simplicity of those particular sounds. The song also develops just enough to keep from being boring.

This last track, “Blood,” was released in October 2012 with Hyundai Card and was also the introductory track for interested parties attending SXSW. The song starts off sounding like a throwback but modernized and with a dash of folk. The spurts of concentrated rock play well with the other sounds. In comparison to the rest of the Goonam’s discography, this can be seen as one of the more friendly songs in that it plays less on intricate changes and more on larger ones to keep the listener’s attention. And the video is a good bucket of fun.

Goonam has also been on Mnet‘s band survival show, MUST Era of the Band, doing covers of songs, including a pretty nifty one of miss A’s “Bad Girl Good Girl.” The group also has some music on their Soundcloud account and tracks available through iTunes (fortunately).

Their style falls somewhere between rock, folk, and electronic music, but it’s all movement-inducing in some way. The music is very relaxing to listen to, and if their album plans come through, then there should be more music from the group by the end of the year!

What do you think of Goonam? Is their music up your alley? Leave a comment with your thoughts, and keep a watch out for the next indie gem spotlight!