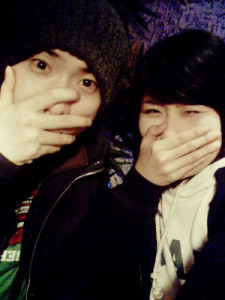 Welcome to our K-pop Indie Gem segment! This week’s highlight is Belle Époque, the duo project group helmed by Misty Blue‘s bassist, Choi Kyung-hoon, and female vocalist Jo Eun-ah. The duo made their debut under Pastel Music in 2008 with Sundays, a thirteen track endeavor that was to be their only album; this album also showcased the duo’s light sound. The only other track that the duo released was for the OST of Coffee Prince and the cartoon Cracker: “May.”

The duo takes its name from the Belle Époque, a period in French history  — around the late 19th century and early 20th century — that is akin to the Gilded Age in the United States: full of peace, arts, discovery, and overall prosperity. Through music, the duo has tried to build on aspects of the arts; they’ve engineered poetic feelings and romantic notions of loneliness — with a Parisian aura — into melodies that tell stories. They’ve crafted their songs into realistic fairy tales and fantasy worlds that capture and evoke memories.

Jo Eun-ah’s breathy voice melds well with the generally lighter instrumental. Indeed, it could be said that her voice limits the direction that the music could take: any stronger and it would threaten to drown her voice. The duo’s sound is similar to that of Misty Blue, as expected, but I’d describe Belle Époque as having more punch than Misty Blue’s soft rock. Their music is certainly no head-banger, but there is a distinct quality of harder edges to the sound in comparison to Misty Blue’s generally ethereal tunes.

“May’s Aftermath” has one of the most intriguing starting melodies. In some ways, it opens simply and minimally, but the vocals give the song a distinct sadness and pleading quality, infusing it with all the emotion it needs to carry. The slight echo effect of the vocals at intervals also contributes to the feeling of being at one’s lowest point, of being close to breaking.

In contrast, “Vacation” starts off with deceptively merry strings. It’s not that the song is actually about heartbreak; rather, it describes the pleasure of being alone after what the lyrics seem to imply was a bad breakup. The use of the strings broadens the span of the song, a direct contrast to the heavier and repetitive percussion elements of “May’s Aftermath.” It helps to free up the melody and mesh the tune with its lyrics. The vocals here take on a cuter, wondering quality, suitable for the fulfillment reflected in the lyrics.

“Cafe Siesta” features e.p ho, who brings a voice that carries a similar timbre to that of Jo Eun-ah. When their voices interweave, this similarity comes together in a particularly outstanding mix. The song as a whole is thoughtful and soothing, propelled into that mood with aid from the muted background bass that lacks the clarity of a piano. The actual vocals don’t start until over a minute in, but the instrumental proves to be attention-grabbing on its own, setting that typical cafe mood before any voice is added.

Further down the tracklist, “You’re Like Me” begins charmingly with vibrant guitar and piano accompaniments before giving way to the vocals. Jo Eun-ah’s voice manages to capture both a playful and longing mood. The lyrics are repetitive, but the break with jazz elements livens the song up, helping to move it along. What’s interesting is that this track ends by fading away, without a definite end, implying some type of continuous cycle that reflects the repetitive lyrics.

Though “December” is the tenth track of Sundays, it was released earlier in 2008 as part of We Will Be Together: Pastel Season Edition, as the first track on the first CD, Music Season. “December,” incorporates more elements of dream pop, which is especially obvious through the electronic manipulations in the music. The transition to that point is also smooth, starting off with simple guitar strings, upon which the sounds are slowly built until all that is heard is that frenzy in the back, which very much suits the multiple repeats of the line, “white snow falls,” in the lyrics.

One of the more unique tracks of the album, “Hiding Moon” starts off like a horror or mystery soundtrack before smoothing out to only slightly haunting vocals. The true excellence of the track is in the way the piano works with the vocals to create intentional disconnects between melody and accompaniment. Though both share the same beat, at some points, the difference between the vocals and the piano melodies is so strong that we have two voices competing for the spotlight; despite this, they’re able to rise up equally and capture the listener’s attention.

My last choice, “The Season’s End,” is the last song of Sundays. It’s certainly the most disjointed track. Taking a break with a soprano part of Mozart’s “Requiem – Introitus” in the middle, this insertion oddly serves to reawaken the song, moving it along past the soft opening. The way the song builds past that break is beautiful, bringing in strings to heighten the dramatic finish of the album, while keeping the steady beat with electronic sounds. The faded ending is a a satisfying one.

The music of Belle Époque is distinctive and this is due largely to Jo Eun-ah’s voice and the way she manipulates it against the various genres incorporated into the duo’s music. It’s not so breathy that it’s creepy nor is it too soft to lack impact. The distinct uses of soft and clear sounds in combination are common throughout, keeping most tracks lively with little additions here and there. Sundays as a whole is a calm album that’s easy to listen to. Each track is nuanced to have its individual expression, and as a cohesive unit, the album successfully leaves its thoughtful impact.