Cinematic Exuberance Or Just Self-Indulgence? - The Sword and Flower Episodes 1-10 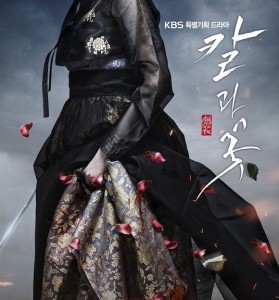 The Sword and Flower (also known as The Blade and Petal) is quite the conundrum of the K-drama landscape recently; based on the first two episodes alone, it’s a drama that carries the poise of an avant-garde classic but arguably executed with the grace of an elephant frolicking through the plains. As with any piece of art that pushes a lot of boundaries, intentional or not, opinions of this drama are nothing short of polarizing. Either way, the initial reaction will be likely be vehement; enter at your own risk.

The strange thing about Sword and Flower is that it’s very hard to discuss the drama in the traditional sense, plot point by plot point. Visual flamboyance and brevity in dialogue meet in an oxymoronic twist that I doubt anyone truly expected, a visual experiment (courtesy of director Kim Yong-soo) that I thought was only available to cable dramas—more specifically, jTBC.

Covering the drama in episodic arches as we normally do is not only going to be a futile process from my end, it will be a great disservice to what drives the core of the show. Therefore, this will be less of a recap and more of a broad overview—a pretext for watching the drama. And while I will still warn you of spoilers in the paragraphs below, and while there are twists and turns aplenty, I don’t think knowing what will happen carries any gravity over how one watches the drama. Sword and Flower‘s centerpiece is its visual grandeur; the important point is how the story is told, not what it is. 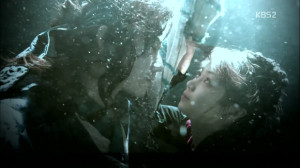 The world of Sword and Flower exists in the twilight years of the Goguryeo period within the Three Kingdoms era of Korean history, which lasted from 37 B.C.E. to about 668 C.E. While we usually associate the sageuk genre with Joseon Korea, the period of Korean history that is most often explored in Korean dramas, Sword and Flower is not the first of its kind.  Jumong is an example of a drama that is from the Goguryeo period (Jumong is the founder of the Goguryeo Kingdom) as well as Kingdom of the Winds.

Goguryeo existed about 700 years before Joseon Korea and the tone of Sword and Flower reflects the minimalism of the older time period and military kingdom; vibrant colors are sparing in Sword and Flower, as is the lighting minimal, and the palace, bare. From the background forward to costuming and make-up, the production of this drama are absolutely incredible, capturing history under the folds of fantasy. The camera work, the directing, the editing—all of it is truly top-notch, especially since the show has pulled back from the opening episodes’ visual histrionics to beckon some truly amazing filmography (I had to hold myself back from littering this post with images.)

But before I wax poetic on this cinematic beauty of this drama, I should note that the writing, though it holds up to the visual storytelling quite well, is somewhat weak in context of that very same visual storytelling. The actual narrative of Sword and Flower is a fictional, hackneyed, Romeo and Juliet-esque take on the end of the reign of King Yeongnyu (Kim Young-chul) and his conflict with General Yeon Gaesomun (Choi Min-su) over how to rule Goguryeo with imminent threat from the Chinese Tang Dynasty. Yeom’s historical coup d’état of the Goguryeo royal government sets the premise of the feuding families and star-crossed lovers parallel with the famous Shakespeare  play.

Choong (Uhm Tae-woong, Resurrection and The Devil) is Yeom’s illegitimate son and skilled bowman, who, one fateful day, meets his future lover (though she didn’t know it was him), Princess So-hee/Moo-young (Kim Ok-bin, Thirst), and her brother, Prince Hwang-won (Lee Min-ho, Moon Embraces the Sun) while assassinating the royals’ own assassin to protect the mastermind behind the plot, his father, from a blabbering mouth in hope that he would finally be noticed by General Yeom. But lest we forget that Sword and Flower is a Romeo and Juliet story, this encounter becomes love at first sight (and first touch) between two who cannot be, Choong and So-hee.

Romance blossoms (quite literally, actually) between them in delicate movements amidst warring political factions. Conversations about Hanja/Chinese characters  spark love confessions, stray rose petals invoke memories and an embrace seals their faith in each other. So-hee, to say the least, takes great liking to Choong and convinces him to try to become a place guard, to become closer. Choong, after finally giving up on pursuing his father, agrees and serves as So-hee’s protector in the palace. However, things go awry as General Yeom continues to send assassins after the royal siblings and hatch coup plans; Choong’s killer-killing is discovered and he is sentenced to death. And yet, when it would be so easy to overindulge in the hopeless, dark destiny of star-crossed lovers, this show has none of that. 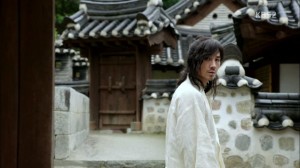 Romeo and Juliet without tragic romance is unfathomable, but what Sword and Flower comes down to is not a tale of two lovers but a search for a place in the world for both Choong and So-hee after losing everything. By episode 10, we have followed our leads to death and back, witnessed General Yeom and So-hee’s cousin Jang, the future King Bojang (On Ju-hwan)’s horrifying coup killing King Yeongnyu and Prince Hwang-won, and found our lovers thrown apart in ways that could surpass Romeo and Juliet itself; this story has progressively become more and more about the extents of revenge and self-discovery via loss of identity. In the latest episode (10), Choong gives up his moral identity (the only thing he really had) to become a soulless servant of his father, while So-hee sacrifices her identity as Princess to become the “shadowless,” “Moo-young.” With that, both put everything on the line to become the sword to the flowers they cherish. They fight not for each other, but for survival and justice, identity and duty—and that makes for a compelling story that I can invest in.

The emotional notes I get from the drama is more along the kind of experience one has while viewing a movie; every scene—every frame—carries emotional weight. However, the weight does not always translate to significance. Action sequences are on par with art films, but they most often exist in contexts that make next to no sense. The silences and slow shots are often overly extended to the point that I often find myself thinking, “yeah, this looks great, but why does it need to be there?” or pondering whether watching a moment draw out for five minutes instead of thirty seconds impacts my visual experience enough to merit the patience required to indulge upon it. (The answer, by the way, is that it most certainly does, barely avoiding spurring frustration over appreciation for the moment.) The use of these heavy moments of visual storytelling are more tasteful as the episodes go on, but it’s enough of a nuisance in the first episode to leave viewers stranded. The proof is in the absolutely abysmal ratings (the 4-8% range).

While those liberties that are taken with presentation can come off as tedious and even suffocating (more so in episode 1-2 than the others), consuming Sword and Flower is a process that is worthwhile once the viewer embraces broad perspective. Coming into a drama with the expectations of swallowing more of the same is only limiting innovation, limiting sageuks to narrations better watched when suffering from insomnia. It’s called avant-garde for a reason—don’t expect anything less. Silence often says more than words, and a character’s demeanor speaks to his motives far more than his actions. 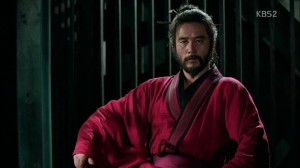 For example, the “interesting musical choices” in Sword and Flower are not always easy to swallow, oft being compared to the experience one has while watching a “spaghetti western.” It’s a collection best summarized as an eclectic mix of rock, fusion music, and just plain weird; but I’ve taken a liking to it. The bizarre dramatics is appreciated, adding emotional gravity to a moment that could be lost in the freedom of the camera. It gives a plastic coating to the drama as a reminder that ultimately, everything is fake in this drama; the scenarios, the story, the star-crossed lovers, the dysfunctional families. The music, in all its wacky glory, grounds the show. It snaps the viewer away from dream space while maintaining the fantasy of the visual experience.

Among the vibrancy of Sword and Flower there exists its bread and butter. I cannot commend enough the acting prowess behind Sword and Flower that breathes life into the story and sells everything that appears outlandish as necessary. Indeed, Uhm Tae-woong holds up well as “abandoned-puppy” Choong, and Kim Ok-bin shines as the strong, ex-Crown Princess Moo-young. However, it is Choi Min-soo for whom I throw flowers of praise upon for being absolutely incredible as General Yeom. He’s the one acting gravitas that propels the show by serving as a narrative and visual focal point. His gaze engulfs the screen to the point that you cannot look away even if you tried, and believe me, I have tried. His “best moments” are a literally a dime a dozen, but his final scene with King Yeongnyu was simply phenomenal.

Sword and Flower is foremost an innovative drama that succeeds so well in creating depth and artistry from its very own flaws—be it the “spaghetti western-ness” or the over-bearing dramatic tension, the show somehow catapults itself with those annoying factors into something more than just your everyday drama. Don’t worry, I’m not going to make Sword and Flower a masterpiece of writing, directing, and acting, or convince you to give the show another chance if you honestly feel that it isn’t for you. But what the drama accomplishes is something more than just re-inventing the wheel. It embraces itself with genuine earnestness. Nothing is a gimmick in Sword and Flower, the craziness is just a reflection of what is—something you, I, or any viewer cannot change.

Abysmal ratings be darned, Sword and Flower will give the drama world a chance to escape norms, reshape boxes, challenge perceptions, and just be free with the drama making art-form. It’s been a long time since a drama has come around that has been about the art of making a drama over the commercialism of selling it; but Sword and Flower, music, 360-camera, extended pauses and all, is a reminder that this freedom can exist and make for a thrilling drama experience worth watching.

In that sense, I could even call it sageuk brilliance.