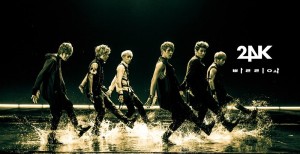 Debuting last September, 24K (pronounced “two-four-kay”) still has their rookie title firmly intact. The sextet arrived on the K-pop scene with a rather interesting concept from the start.

Four members — the vocal line — debuted before the group as subunit 4K with an acoustic sound, and the remaining two — the rapper line — have yet to debut as a subunit but are slated to do so with a hip-hop edge as 2K.

Coming out of small label Choeun Entertainment, 24K debuted with the track “Hurry Up,” an interesting though lackluster hip-hop influenced dance track. While the song made use of some different electronic sounds, I found it rather unbalanced, and the music video didn’t do much to help it. But it was enough to show that these guys have talent.

Now, 24K has returned with their mini-album U R So Cute, featuring the promotional track of the same name. They’ve shifted gears this time, as the single is cute and not all that intense compared to their debut track, if you couldn’t tell from the title alone. “U R So Cute” is more of an electro-pop track that’s light and summer-y.

If you couldn’t hear the change, then you can definitely see it in the music video. It’s so cute and saccharine that I was sure I would get a cavity. I was surprised that they were even the same group from their debut because the aegyo is in overdrive throughout.

At first sight, this reminds me an awful lot of C.N. Blue‘s music video for “Love Girl” simply because the premise is similar, albeit much more aegyo-driven. Instead of a poster coming to life, we have stuffed animals that come to life all also in love with the same girl.

The video opens with the love interest as a young girl playing with these stuffed animals. As she becomes a teenager, she stops playing with them and abandons them under her bed in favor of reading magazines instead. When she’s older, her mother seems to be cleaning her room and puts all of the junk she finds in a crate. Nestled in it are her old toys, all still dressed in their basketball jerseys that say 24K and the names of each of the different members.

The toys suddenly transform into the members of 24K, and they all yawn as though they’ve been asleep all this time. Upon seeing her though, they fall madly in love with her and begin to follow her around the house. Unlike C.N. Blue, the members don’t really try hiding since it seems that she can’t see them as anything more than toys, though I’d be freaked out if my stuffed animals were randomly moving around the house without my doing. 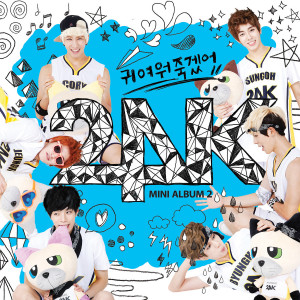 The guys follow her around, running away when she’s changing, watching her in the kitchen, helping her get a book from a high shelf, and more. But when she brings a guy over after what appears to be a date, they get jealous and mess with him, which is just plain scary since to him they are also probably nothing more than stuffed animals who also happen to be beating him up.

This whole time we haven’t gotten a glimpse of her face, and it seems neither have the guys. At the end, we finally see her, and it seems that she’s actually grown into being an ahjumma who has a creepy Cheshire cat smile. She appears to be no longer deemed attractive as they all run away except for Sungoh, who still seems to be entranced by her at the end.

While this concept is supposed to be cute, it just creeps me out a little too much. Perhaps that’s because they don’t really have a lot of aegyo as a unit. To me, there are two kinds that are successful: silly cute and so-cute-you-must-inhale-aegyo-instead-of-oxygen-because-you’re-so-serious-about-being-cute. They definitely don’t have the latter, but they aren’t quite silly, which makes their attempt at being cute kind of awkward.

That also comes from the weird divide of the intense choreography and hip-hop styling against the cute facial expressions and storyline. I don’t know how I should feel about someone who is head over heels for this girl and follows her around with adorable facial expressions when he’s also doing sharp choreography and wearing a snapback and a basketball jersey. It’s contradictory and confusing.

While the choreography is great and shows off their skill much more than that of “Hurry Up,” it just doesn’t match the cuteness all that well. The disparity is especially evident in the dance version just released on August 19.

While they try to do everything cutely, none of it really goes except for a few particular moves. For instance, during the chorus when they sing “whoa oh oh oh,” they do this one move that I’m not really sure how to describe other than it looks like they’re pretending to be teddy bears bouncing from leg to leg and hitting their heads. It’s a weird move that really stands out against the other more technical steps they do, and even though it matches the tone, it looks kind of ridiculous.

Perhaps the hard thing about all of this sweetness is that the song itself is nothing spectacular either because that would certainly have made it more palatable. The lyrics about a guy who has been searching forever and not having any luck while all his friends meet girls, but now he’s finally found the perfect girl for him. It’s cute, and the song is sufficiently sweet and light with the electronic beat. But it’s too light for their more powerful voices, particularly the rapping which really doesn’t belong in the song. The weakest part of the song would be the chorus, which is repetitive and lacking.

“U R So Cute” suffers from a divergence, which could have been resolved in the music video through either the intense choreography and hip hop styling or the cute concept, but since they do both, it’s only further exacerbated instead. It weakens the track and makes for a lackluster comeback for 24K.