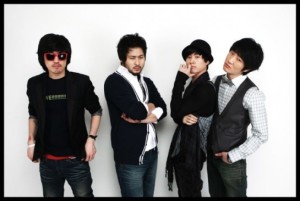 That’s right–Indie Gem is back to once again steal you away from the candy flavored K-pop scene to spotlight some of our favorite and relatively lesser known K-music acts. This week we bring you SALTNPAPER, MYK‘s soft rock alter ego. Many know Michael Y. Kim as MYK, but the indie rock world is about to know him as SALTNPAPER. Hailing from California’s Bay Area (that’s right, Bay Area represent!), MYK moved to Korea after a stint as an MC and vocalist for a local hybrid hip-hop group called Weekend Sesh.

In Seoul, MYK flowered into a MC, DJ, and producer, and is particularly well-known for his relationship with Tablo and Epik High, as well his involvement in Tablo’s Map the Soul project and label. In fact, many consider him an honorary member to Epik High given his vast songwriting contributions to the group. In the meantime, MYK has also performed alongside other acts like Kero One, Dumbfoundead, and Far East Movement, and has long been associated primarily with the hip-hop genre, something he discussed with Amy during a recent SB Chat Box.

SALTNPAPER, however, leaves behind the hip-hop for a more soft modern rock vibe, and becomes the name MYK will use for his rock compositions. His solo début has been long underway, and for his fans, highly anticipated for far too long; but SALTNPAPER doesn’t disappoint in the least. Who would’ve ever guessed that behind his scruffy beard and edgy appearance, MYK was a sweetheart with soulful lyrics at the ready and had such a talent with sweet rock acoustics?

For his self titled début mini album SALTNPAPER, MYK features close personal friends like Tablo and Polish singer Iza Lach. Many of the songs balance Korean and English in the verses, while some are expertly crafted instrumentals.

Because of MYK’s broad scope of experience with music genres, SALTNPAPER (the self-titled mini album) often brings in a hybridization of sound, something some may not have necessarily been expecting. “Love Strong,” the pre-release featuring Tablo, incorporates heavy, thoughtful verse sewn seamlessly into structured piece, and is the only song that reps MYK’s ties to hip-hop. Title song “Hats” focuses more on a soft rock sound, and is perhaps the most western-influenced piece on his album. Tracks like “Autumn” and “Heart Storm,” however, are more detached pieces in that they are vocally emotional and heavy, and convey a lot of lyrical talent.

The cool part about SALTNPAPER is that, for a Western listener like myself, I can make connections to SALTNPAPER’s music to the likes of The Fray and even OneRepublic and use those references as a way to gauge SALTNPAPER’s musical trajectory. It’s actually even cooler to listen to this almost futuristic type of emotional soft rock that has been on the up and coming in the States in a Korean equivalent. Needless to say, MYK’s work under the name SALTNPAPER will undoubtedly leave an impression on the indie rock niche, as his unique style channels influences from both east and west and personal genius.

The SALTNPAPER album wraps up into a unique package that creates a sound that seems almost weightless and yet is anchored down by the powerful presence of the lyrics. Though it is a departure from both traditional hip-hop and even traditional soft rock MYK, or SALTNPAPER, holds down his one man band with his distinct and almost otherworldly music. For a début, he sets the bar mercilessly high, and boasts of extraordinary musical artistry that you just don’t find on the mainstream. Be sure to look up SALTNPAPER’s full début mini and be the judge for yourself, and be on the look out for his projects going forward!