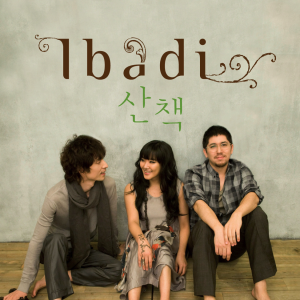 Ibadi is a (currently disbanded) three membered pop-jazz-folk fusion group helmed by Clazziquai‘s Horan. Besides having Horan as a vocalist, the group included Justin Kim (guitar/bass) and Geojung (producer/guitar/drums). Their name, “Ibadi,” comes from the korean word for “celebration,” and their sound tends to be heavily acoustic and oft described as “earthy.” They’ve  had their music show up on several OSTs, such as the OSTs for the 2011 drama Brain and the movie Loveholic. My first exposure to the group actually came through their 2010 single, “산책 (Stroll),”  but they had two album/single album releases before then. The first was Story of Us in 2008,  and the second was 지금 사랑하지 않는 자, 모두 유죄 (If You’re Not in Love Now, Then You’re Guilty) in 2009. Their final album, Voyage, was released in 2011.

Ibadi doesn’t stray too far from the kind of vocals you know and love from Clazziquai, but I would probably classify Ibadi as having a mellower sound that is more comparable to Loveholic and/or Lucid Fall. To hear it for yourself, here’s “Never Ending Story” and “Nostalgia” from Story of Us:

This next song, “Solitude,” (from the Brain OST), has a sense of antiquity that contrasts with the two songs above. I love how the Korean folk song foundations give character and ingenuity to this song that I didn’t quite find in “Never Ending Story” and “Nostalgia.”

As “산책” was my first taste of Ibadi, I’ll always feel nostalgia for this particular song as I tend to attach to the songs that iniitially get me to enjoy a group. What is unique here, however, is that “산책” remains my personal favorite from the group to this day. Unlike the somber ambience of most of Ibadi’s repertoire, “산책” manages to stay bright and alive without having to sacrifice itself to “peppy” or “cute” tones. Horan sounds as soulful and rich as she always is, and I think I could probably play this song forever.

This is a stunning live performance from the group, which is of a song called “그리움” or “Longing.” I don’t think that I can fully describe how amazing it is in words, so I’ll leave you to just listen to how great it is:

Here’s the final song for today from their last album, Voyage, conveniently also called “Voyage.” It’s a bit unique in how all of its elements fit together, as it has a slightly uneven trade-off between electric guitar, acoustic guitar, voice and piano. This song is really carried by the instrumentals, so take the time to appreciate all the details.

For me, what makes Ibadi special is how nonchalantly they can create a sense of brevity with their music. It’s not as though it’s of extremely simple composition, or even artistically minimalistic; it’s more like the group is one of the most “efficient” song writers I’ve heard. “Efficiency” is a bit of a strange concept to put forth in the realm of music, but I liken it to idea that each element that is added to a song is fully utilized and given importance. When I listen to Ibadi’s music, I end up finding myself easily sifting through all the layers of a song in real time. I don’t have to dig to pick out the instrumentals against Horan’s voice—she’s in this magical harmony with everything else in the song. Essentially, what I’m trying to get at is since all the elements flow in and out of each other so well and are given equal importance, it’s hard to think of the instrumentals and the vocals two as very different things. You don’t find this kind of synergy very often in music, so I think it’s well worth listening to Ibadi for that experience alone.

I hope that this week’s K-pop Indie Gem will inspire you to explore the small discography that Ibadi has to offer, or at least to seek them out for musical comfort on a lonely day. I know that I certainly have. and probably will in the future.