Ivy Returns with "I Dance" 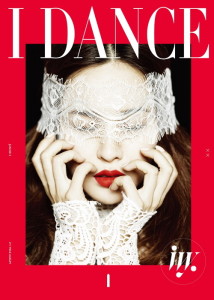 Singer Ivy seems to be constantly surrounded by scandal, but it clearly hasn’t stopped her. The soloist debuted back in 2005, but due to all the controversy in her career, she has released considerably lesser than one would expect from an artist who has been in the industry for eight years. Ivy released her first mini-album in three years last May, and now over a year later, she’s returned again.

Her last single “Torn Heart” was a ballad, and it’s great to see Ivy change gears and go for a more upbeat sound with her comeback. This time around, she’s collaborated with JYP, her first time working with him since her debut “What Happened Tonight.”

For a dance album, it opens strangely with a ballad track. “Missing You” is about a woman who can’t get over a break-up because she still loves and misses her ex. She even says that she will wait for him and wishes she could turn back time. It starts with a simple piano and beat that’s soft and sad. It quickly shifts into a full orchestra-driven, heartwrenching affair, and Ivy’s voice suits it wonderfully. While Ivy has a voice that could easily fall on the thinner side, she knows how to use it, to bring emotion to a song without sounding whiny.

The track is beautiful and it pulls at the heartstrings. The best thing is that it creates a short narrative between this and the next track, setting up this love that she can’t forget. The single and namesake of the album “I Dance” follows this up lyrically — the track is about dancing to try to forget love. It creates a perfect little arc between the two.

As a whole, the single speeds us up with an unusual but spectacular combination of tango and electronic music. JYP, who wrote the song, uses the electronic music subtly, weaving it in so that you almost don’t even realize it’s there until it glides over and then allows the tango take control. It’s sort of a tango in and of itself between the two types of music, though in a much more delicate manner.

For such a powerful genre of music, Ivy would typically not have the right voice because she sings in a higher register than traditional tango. But then this isn’t traditional tango, which is why it works. Conceptually, it also leads to a gorgeous visual performance, both in the music video and live performance.

My only difficulty with this song is the addition of Yubin‘s rap. While it’s obvious that the Wonder Girls are on break due to Sunye‘s marriage (and subsequent pregnancy), and JYP being at the helm, would jump at the chance to promote her, the combination doesn’t work musically. The way the song melds together two very different styles of music makes it such a striking song, but when Yubin’s rap enters, the song changes too abruptly, with a heavy electronic beat different from that of the previous section.

Perhaps it could’ve worked as a bridge within the sections, but it almost completely drowns out the violins of the tango when they return. It’s like a different song, until the first beat re-enters during the second half of the rap, making for an awkward cut. It’s unfortunate because Yubin is one of the few female rappers in K-pop that I think is actually talented.

The album goes into full dance mode with “Complicated,” a track about a woman that guys don’t get because she’s more complicated than they realize. It starts with an electronic line of music that almost sounds like a siren with several bass drops. Suddenly, a dance beat comes in, and it’s got this great club feel.

Unfortunately, Ivy just doesn’t have the right voice for this song. She suffers here from a similar problem that Seo In-young has dealt with in past tracks. While this is definitely better than, say, “Oh My Gosh,” her voice is still drowned out by the intense electronic music and ends up sounding much weaker than we all know it really is.

Plus, the man in the background who says “You got it, girl, you got it” reminds me distinctly of Nassun in Lee Hyori‘s 2008 hit “U-Go-Girl” with his part “hey, girl, u-go-girl.” Even though the songs are different, that similarity strikes me immediately. On top of the difficulty of just locating Ivy’s voice in the track, the entire composition puts this as one of the weaker tracks on the album.

“Summer Holiday,” on the other hand, does electronic music right for her. It keeps her voice at the forefront so that it is what drives us through the song. The track possesses more depth that cuts it just right; no complications or more intensity than needed. It features tasteful layering, with shouts and synth working together with percussion, and goes perfectly with the lyrics about going on a summer holiday with someone you love.

The rap in this song is also more appropriate as the song stays in the same style throughout. It doesn’t seem awkward or forced into the track but rather perfectly placed, making for a fun, upbeat dance track that is perfect for the season and a definite highlight on the album. 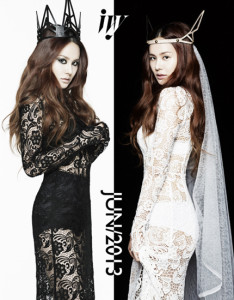 The album changes suddenly with “Because of a Man,” a ballad about a woman who has already had her heartbroken and has it happen again. The lyrics are incredibly tragic, and the music is suitably dramatic, but not melodramatic. It actually follows a similar arrangement to the opening track “Missing You,” but this song is more delicate and more sorrowful. It is full of swelling strings and a slow but heavy beat, all of which contribute perfectly to the emotion of the song.

Ivy’s voice gives me chills with the way she emotes; it never feels like she’s trying too hard, even as she belts out her notes. Admittedly, she does appear to struggle a few times, but it’s barely noticeable through everything. The song ends suddenly with the way the beat cuts out, but all in all, it’s another favorite off the album.

“Amazones,” another dance track that is essentially about being an independent woman, rounds off the album. It has that feeling of being an anthem for women everywhere. It’s a fun electronic song with a great hook and would actually have also made a solid promotional track. I imagine it would have had fantastic choreography with Ivy in her highest heels pushing male back-up dancers away, but maybe that’s just me.

In closing, Ivy’s I Dance is a well-varied mini-album, featuring a great mix of dance tracks, a couple of ballads, and the nice surprising tango of a single. It makes for a great listen, each song distinct from the previous, and Ivy shows that she’s not in the industry just to be a scandal-maker, but to share and showcase her vocal prowess. Here’s to hoping no more controversy will force her out again.