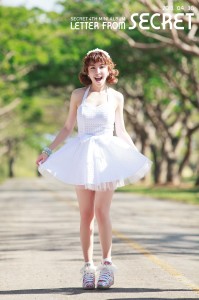 Secret is back with new mini-album Letter from Secret, once again showing off their polarizing cute concept. Love it or hate it, one thing Secret has done well is establish two distinct images and song styles: sexy, intense Secret and cute, soft Secret. The girls new mini-album is 100% the latter. After passionate singles “Poison” and “Talk That,” it was no surprise that their summer release is an easy-breezy-pinch-their-cheeks-pleasey song. “Bubbly” is an established part of Secret’s song repertoire, and one that they pull off image and music-wise.

However, the musically disappointing thing in Letter from Secret is not the “cute” part, but rather the “soft” part. The entire album exhibits a mellow, monotonous sound, and after the initial sugar-shock of “YooHoo,” the rest of the songs meld into one big track due to lack of musical variation.

The first track is their upbeat promotional single “YooHoo,” which is about falling in love with a friend, and therefore trying to catch their attention as a lover. With Kang Ji-won and Kim Ki-bum back at the helm, “YooHoo” continues with Secret’s retro style, though this time with more dance electronics than big band horns, giving the song a bubblegum pop feel. The music video emphasizes the cute concept, but musically the song is light-hearted and relaxed, making it less overwhelming than “cute” sometimes suggests (i.e. hyper-aegyo). The girls do sing in a higher range as is typical with cute, but they seem to have found the sweet spot (pun intended) in their upper registers and sound more controlled than grating. The ease of the song is lovely, but the sameness of the vocals fails to convey the excitement in the lyrics. This could have been remedied by giving the girls lower notes to build up to the high ones, but it would sacrifice the lightness of the song. Overall, “YooHoo” serves Secret well as a cute single, but doesn’t push them to new heights.

“Daddy Long Legs” is the next track, and it starts off with easy-listening guitar, finger snaps and chimes. It’s like slapping a neon sign on the song, advertising a minimal instrumentation ballad with mellow, wistful vocals. Everyone knows what this song sounds like, and “Daddy Long Legs” delivers that exact bland predictability all the way through. It’s an indistinguishable drop in the ballad bucket, making it my least favorite song on the album.

Next is “Only U,” which highlights Jung Ha-na, formerly Zinger. It was reported that Ha-na wanted to shed her previous stage name because she felt she had matured and wanted to signal a fresh start. “Only U” is where she is meant to shine as the verses consist entirely of her rapping. While not as energetic or powerful as her past solo “Amazinger,” “Only U” does demonstrate that Ha-na can drive a song with soft flow. The chorus sounds like a standard ballad and it doesn’t exactly complement the rapping, but the effort to combine the two musicalities elevates the song to more than mediocre. However, this elevation is short-lived because at the bridge the rapping is dropped, never to appear in the song again. The songs finishes with a flourish, but pre-bridge and post-bridge sound like two different song ideas, leaving “Only U” feeling incomplete.

The album ends with a bolder, fuller sound in “B.O.Y (Because Of You).” “B.O.Y” follows the rest of the songs in that it is a darker-sounding ballad, but where track two had disappointing predictability and track three had incomplete execution, “B.O.Y” builds with music that lifts, pushes and pulls the song along. It has an effective pattern where each verse starts off bare, then layers a series of instruments until it hits a very full sounding chorus. Strong emotions are conveyed through every instrument that is layered, and the girls are finally given some vocal variety with overlapping and harmony. Also, Ha-na’s rap solo is more powerful here as a bridge that adds interest and breaks the patterns of the verses. The song won’t win awards for originality or innovation, but it is executed well with a beautiful sound. 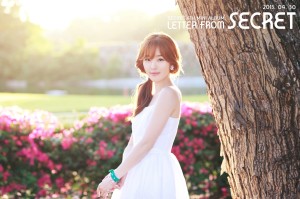 Perhaps what the album lacks most of all is a true showcasing of Secret’s voices and teamwork. Ha-na does get the spotlight a bit as noted in “Only U” and through her lyricist credits, and the consistency of the others’ vocals — such as Sun-hwa‘s high notes — are present as well. However, for the majority of the album their voices have such a similar quality that they blend together, and not in the beautiful harmony way. The girls’ vocals can be described as pretty, but not outstanding. In their 180 switch back to cute, they rely much more on their visual charm rather than powerful voices.

On one hand the album is not offensive; each song follows a logical progression and is pleasing to listen to. On the other hand, it lacks the “wow” factor that makes an album memorable. What we are left with is a mini-album that is good while it lasts, but fails to sustain for any length of time. 3/5.

Readers, let us know what you think of Secret’s new mini!