Key, Oh How the Almighty Has Fallen 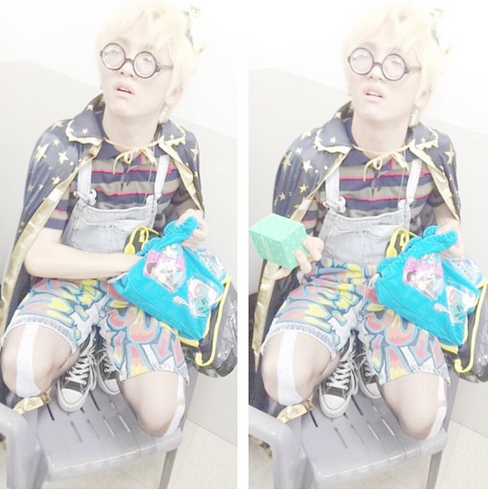 May 25th marked a momentous moment in K-pop for many, namely the epiphany “Oh God, I’ve been in K-pop for that long,” when it’s realized that SM’s “young” contemporary boy group SHINee, are boys no more and have reached their 5th year as a band! Onew, Jonghyun, Key, Minho and Taemin took to celebrating this milestone with a few fans in a fanmeet that doubled as a concert of sorts.

In recent years the “five year” curse in K-pop has become a lot less applicable, groups like Super Junior reaching their 8th year, Big Bang and Brown Eyed Girls approaching their seventh, and SNSD and KARA approaching their sixth. So it’s safe to say that hopefully, SHINee will be with us for a few more years to come. Unfortunately, it seems the curse has reared itself in other, ugly, ear bleeding ways. Seeing how this five year anniversary also marked the birth of what is probably the most tragic Key solo performance ever. Performing “We Are Golden” by Mika and screwing everyone over.

Key’s deteriorating skills as a singer have been discussed ad naseum, but this performance is terrible enough for a PSA to be necessary. It serves as a warning for many things; the results of terrible song choices, what happens when you prioritise flash over skill, what most fifth year idols sound like when their care cup is completely knocked over.

When it comes to solo performances, Key hasn’t been shy about showing his love for performing kitch, pop-tastic, queer anthems in the past. Which is fine, since he’s comfortable with who he is and what he likes and obviously doesn’t damn otherwise. Mika though – you do not cover Mika when you have the range of a teaspoon. Let alone when you make no effort to actually sing it properly. No doubt that Key would be a total party to have at a noraebang, but all appreciation for his drunken screeching ends there. I’m legitimately dumbfounded by how flat out bad this performance is. Is this Key’s latest attempt at achieving white hipster-dom – making his solo ironically horrific? At the very least, you can’t tell me those stage clothes weren’t meant to be done as a joke? The unholy screech of a lab being exorcised at 3:39, the mirror shattering falsettos dispersed throughout — maybe everything is just an elaborate parody of Minho’s performance prowess? If so Key, you sort of missed the mark.

In all seriousness though, Key’s degradation as a singer has been a gradual and consistent process. As Patricia mentioned during Seoulbeats’ SHINee exchange, he lives to entertain, unfortunately at the cost of refining his technical skills as a singer. It’s not as if Key isn’t talented, sure he may not have ever been an amazing singer, but he had a unique timbre and was learning how to use it. As the token “all rounder” member of SHINee, Key definitely tried to live up to his name – he danced well, he rapped… like an SM rapper, but he sang competently! One listen to their earlier debut lives, such as this one of Romantic, and his fall from “the almighty” to whatever he is now, is bemusing.

Safe to say, during SHINee’s early years he was a dependable group member and a relative pot of gold. It’s hard to pinpoint when exactly it started to go downhill – but it was probably “Lucifer” when his voice started becoming slightly shrill and everyone became a tad bit worried. Of course, most of us brushed it off, Lucifer is a difficult song to sing live, and Key was never the most consistent performer in SHINee anyway. Let’s wait until the next promotional cycle and Key should be right back in his A game.

It’s not as though he can get any worse than that though, right? His voice may have become shrill and unstable, but at the very least he’s trying. After all, the almighty can only go up from this, right? The only way he could get worse was if he just didn’t bother anymore and there was no attempt made.

How do you even regress so badly in such a short amount of time? There are several theories.

It’s important to remember that at SHINee’s debut, even though everyone was too busy going through a mental breakdown because of Taemin, Key was still considerably young too. He was only sixteen. Still in your transformative years, your voice is going to change over time. It’s more than likely that Key just doesn’t know how to cope with the changes of his voice, continuing to sing like he would when he was sixteen when his voice was warmer and fuller, hence coming close to damaging it and turning it into a nasally mess of blah.

However, looking at his Sketchbook solo performed only two months ago, it’s apparent that despite how bleak things look, Key is not beyond help. His performances during “Dream Girl” and “Why So Serious” were also perfectly adequate, many thank to SM’s ever reliable A&R team. With a combination of singing in the right range, good song choice, and proper attention to execution, there’s still light at the end of the tunnel.

The above performance is what complete and utter lack of motivation looks like. Of course it doesn’t help that Jonghyun’s absence leaves a gaping hole during the performance, but Key looks like he’s just waiting for the entire thing to be over so he can go down some shots with his 91line. Which leads to the second theory. Once you hit the fifth year of idoldom, it’s only fair that you become a little jaded. Having five years of wiggle room and discovering what he feels defines him as a performer, it’s become pretty apparent that Key would less like to croon “Noona Neumo Yeppo” and would prefer his performances to involve more prancing around on stage and less actual singing. Unfortunately, a good performance can’t forgo one or the other.

It’s really great that Key is resolute in what he wants to perform and has a distinct vision for his stages, but without proper practice in regard to his singing, it’ll completely backfire. Not to mention as a result, he seems to be looking more and more unmoved during SHINee’s own stages, especially when performing older songs. It’s lazy singing, and depending on how you look at it, extremely unprofessional.

However, maybe it’s a bit too naïve to blame Key’s sapping vitality on his apathy towards performance. After all, he looked so dead and haggard during “Why So Serious?” promotions, to the point where it’s a bit disconcerting. Minus his radio schedule, he doesn’t have particularly more activities than the rest of his band. Especially not compared to Taemin, who SM is pushing into every niche they can find. Which brings me to Theory 3…

Below is an impeccably constructed and well researched scientific graph documenting Key’s decay in regard to Taemin’s progress: 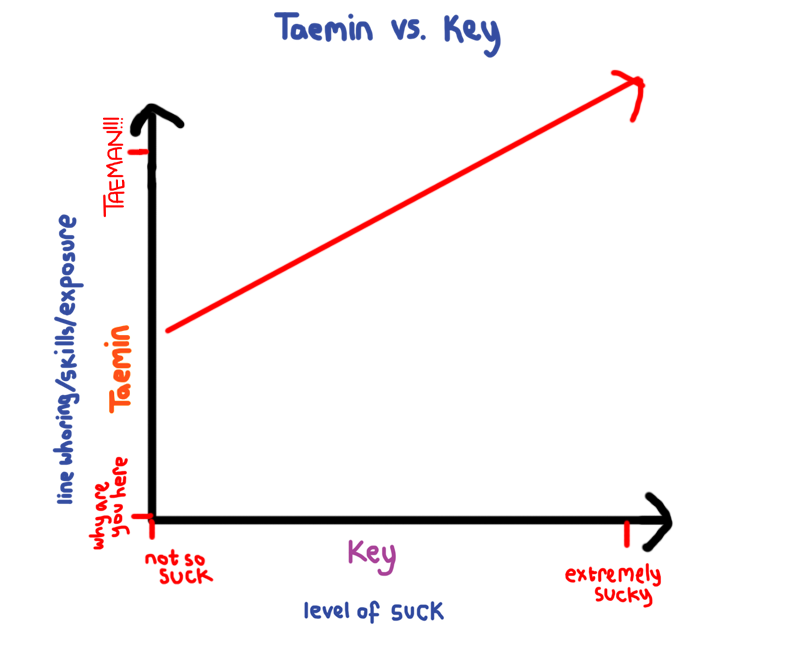 Coincidence? Right. The eternally cherub like face, the dramatic improvement in singing, pretty much becoming the face of SM boy bands. Clearly Key’s seemingly natural degradation is merely a scratch on the surface of something more sinister, a true conspiracy that goes beyond that of SM to the very depths of the underworld. Look forward 666 days from now on March 24th 2015, to mark the dissolution of SHINee into “Taemin and the SHINee Scene.” After all, it’s a Taemin world, and we’re all just living in it.