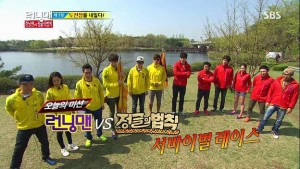 As we reach the mid-way point of May, K-varieties seem to be going into overdrive as summer approaches and they gear up for it with a lot of amazing episodes.  Just this past week, Running Man had an awesome episode in which the cast challenged the cast of Laws of the Jungle, Infinity Challenge held an ‘Idol Challenge‘ that was more than a little challenging for the idols which spurred the Infinity Challenge members to instead become teachers of Korean history, Blind Test Show 180° held a ‘super sized‘ show, and the cast of Barefoot Friends headed to Jakarta, Indonesia for their latest barefooted adventure.

The following are the top 5 Things that happened in K-pop last week that I think were a bit more special than the rest. If you’re not up-to-date with your K-pop and don’t like spoilers, turn back now or you will definitely be spoiled.

On the latest episode of Dad! Where Are We Going?, Yoon Hoo and Lee Junsu were paired up to go gather vegetables and along the way played, and got played, by a piece of paper and the wind. Hoo also got a boo-boo and maknae Junsu surprisingly was very helpful in taking care of his hyung’s injury.

It was a night of great performances as Immortal Song 2 celebrated the songs of legendary Korean rock band Deulgukhwa. Although the likes of 4Men, Jay Park, and JK Kim Dong-wook turned in awesome performances, it was current lead singer of another legendary rock band Boohwal, Chung Dong-ha, who won the night with his rendition of the band’s song “Please.”

It was the second episode of Choi Kang-hee guesting on 1N2D as the BFF of Joo Won. She tries to help out Cha Tae-hyun and Yoo Hae-jin who lost the chance to eat the dinner that Sung Shi-kyung‘s sunbae, Lee Moon-sae, brought for the cast.  She and Joo won taught the other two the “Shy Dance” which she did on an episode of their K-drama Level 7 Civil Servant.

B1A4‘s latest come back with “What’s Happening” has been a lot of fun with the wacky, funny and at times creepy MV for the song. The song is good, but paired with the MV everything just sort of clicked to make it really ‘love’ worthy.

1. Stretching out with INFINITE

It was part two of INFINITE on Weekly Idol and boy, what these boys will do for a taste of Korean beef. To prove which member is the most flexible, the had to do the splits and the one who could get the lowest to the ground won. In the age of skinny jeans, this is not an easy task to do, but most of the boys did very well with Dong-woo beating them all by doing the splits all the way down to the ground–at what cost I’m not entirely sure as he sure felt the repercussions for the rest of the show.  The funniest thing is that for the whole time I kept thinking that they would give the cast of Running Man good competition in the stretching game save for Sung-gyu who was unsurprisingly inflexible and Sung-jong who I thought would’ve been way more flexible.  What was also hilarious was the way that DefConn and Jung Hyung-don measured their performance–even in the next game they played.

Those were the 5 Thing I LOVED in K-pop last week, were they yours?