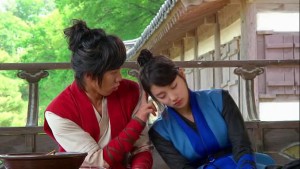 Last week was an eventful one in the K-popiverse with many things happening–some good (see left), and some not so good.  It definitely made the choosing of the top things that happened during the week a more challenging task.

The following are the top 5 Things that happened in K-pop last week that I think were a bit more special than the rest.  If you are not up-to date on your K-pop turn back now or prepare to be spoiled.

It was part two of what looks like a 3 part Siblings Special on Dad! Where Are We Going? The kids had some down time after completing their food collecting mission and all the boys got together outside to play around.  Unfortunately for Hoo, jumping rope and baggy pants don’t really go together…  Next week’s episode looks to be like a lot of fun as the dads and kids compete in some sports challenges.

Specifically Hapkido moves.  Seo In-guk was a guest on the latest episode of talk show Mama Mia along with 2PM‘s Nichkhun, U-KISS’ Kevin, Teen Top‘s Niel and 2012 Olympic  Bronze medalist in Foil Fencing Choi Byung-chul. In this clip from the show, Seo In-guk demonstrates some defensive moves to use when a guy grabs your wrist on MC Kyuhyun.

3. Dancing With A Creep

It was the semi-final of Dancing With The Stars Korea with miss A‘s Fei and her partner Kim Su-ro, rocker Kim Kyung-ho and partner An Hye-sang, and magician Lee Eun-gyeol and partner Lee Jeong-hyun dancing off to make it to the season finale. They all put on great performances with Fei’s team coming in first in judges’ points and Lee Eun-gyeol coming in second.  But points from the judges isn’t enough because viewer voting counts too which led to Lee Eun-gyeol being eliminated.  Here’s his performance to Radiohead‘s “Creep” being sung by Hong Kyung-min with which they actually tied Fei‘s team for highest score of the night from the judges with a 29.

K-pop queen Lee Hyori keeps pumping out the hits with her latest release “Amor Mio.”  The ballad is a duet with Super Star K4 contestant Park Ji-yong of Honey-G who also plays the piano on the track. The song is supposed to express the agony of breaking up with your love and I think it does a wonderful job of doing so.  LOVE it.

For the first time since their leader Lim Yoon-taek‘s passing, Ulala Session appeared on a television broadcast.  They appeared on the Lee Sung-chul Special of Immortal Song 2, which they decided to do because Immortal Song 2 was another one of the shows that helped them grow their popularity and get their music out to the public.  It was a great performance in which the group proved that even though they had suffered a great tragedy, they are “2 Legit 2 Quit” and I’m sure Lim Yzoon-taek would’ve wanted the same. They also won the night beating Ailee who had previously withstood an awesome performance by F.T. Island (one of their best I’ve ever seen televised).  Welcome back Ulala Session!