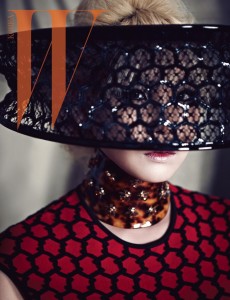 Welcome back to For Your Viewing Pleasure, where we take the time out of the week to share with our readers some of the best and most recent photos tied to the K-pop landscape.

Normally when I look peruse my way through K-fashion magazines, there will be one or two photos per shoot that catch my eye, which makes it easy an easy decision for me as to which photos I want to share with our readers. Occasionally, however, there are entire photo shoots that manage to blow me away.

The following are four photo shoots from April editions of magazines, that made me feel that it would have been a shame if I didn’t share more than just one or two photos from them with you all.

First up, we have 2NE1 fashionista CL featured in a shoot entitled “Keep Calm and Swag On” in this month’s W Korea. The shoot was done in London and has her posing in pieces from the contemporary Alexander McQueen brand McQ with accessories from Ambush, in front of graffiti by the famous British graffiti artist Banksy. You can tell that CL was definitely not just the model, but also the muse for the whole concept of this photo shoot: the elegant high-fashion pieces mixed in with the gritty urban-punk vibe — everything just screams CL, don’t you think?

W Korea really outdid itself for its April issue, with special spreads spanning 40 pages for nearly all the groups on the SM roster as part of its collaboration with the 10 Corso Como store brand. One of the shoots that was a standout to me was f(x)‘s shoot promoting Corso Como‘s Audio-Technica headset (check out the Idiotape remix of their track “Ice Cream” that was used for the backtracking of the ‘Image Film’ for this shoot). The use of technicolor-like projections creates a retro yet futuristic — and in some cases, creepy — vibe that reels you in.

Another SM artist that caught my eye in this edition of W Korea was Jessica of SNSD who posed in Rag & Bone clothing for her “Come As You Are” shoot. I’m not normally one to gush over Jessica as a model (personal opinion here, but her sister is more of a natural model), but if ever there was a shoot to convert me into a believer, this would be it. Everything about this shoot — the clothing, the styling, the modelling, the abs — gels together to create a gorgeous product.

The last (but certainly not least) shoot from this month’s magazines that managed to make my breath catch a bit was Han Hyo-joo‘s shoot for High Cut Vol. 98. The photoshoot features the lovely actress in Calvin Klein apparel in the heart of New York City. I just simply love the color palette and the gritty, grungy feel to this shoot.

That’s all for this week, hope you enjoyed these photos as much as I did!