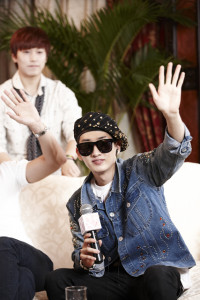 Entertainment companies have jumped on the live stream bandwagon, utilizing them for concerts, interviews, comeback showcases and most recently virtual fan meets through Google+ Hangouts. Google in particular has attached itself to K-pop, and this year has shown a more organized Hangout effort with SHINee, 2PM and Super Junior during A-pop Star Week, and with Infinite and Teen Top during promotions for their new singles. From an entertainment company’s perspective, the Hangouts provide low-cost international promotion. For Google, tapping into the Asian pop scene is a way to get a young, diverse demographic on Google+. For fans, the benefits are apparent — meeting the idols in “real time,” on a conversational level, available worldwide. Overall, these Hangouts seem like a win-win for everyone involved.

However, since this is a relatively new “venue” for K-pop companies, the kinks have yet to be worked out. All the Hangouts thus far have been characterized by an overall awkwardness due to translation and fan interaction issues. They can be awkward for the bands, the participants, the viewers or all of the above. In order to critique and see what works in creating an effective Hangout, I’d like to focus on this year’s G+ Hangouts, as they exhibit similar formats and involve both Korean and international fans. 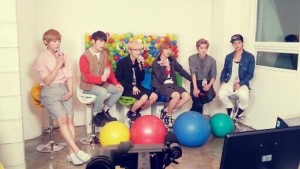 First, there is the immediate problem of translation for a global audience. All fan participants in the Hangouts have to speak English or Korean, and so far, translation has been handled in three ways: 1. Having a separate, bilingual host for the event. 2. Mystery translator, who translates for the group and fans in the Hangout, but who watchers don’t see. This means that the streaming audiences do not understand half of the conversation. 3. One of the group members translates, if the group has an English speaker.

Any of these formats magnify how difficult the language gap is. First, there can be technical delays, so when one speaks it takes a second for the other side to process. On top of that, time for translation adds to the delay. This means that an easy, natural-sounding rapport is not possible during a K-pop Hangout unless the same language is spoken, and even then some viewers will inevitably be left out. Inherent translation issues mean that the overall problem of awkwardness might not be erasable.

However, this is where an idol group can shine. The streams are arguably better when the groups have more control. Looking at the A-pop Hangouts, 2PM’s felt the most fun, because they didn’t have a separate host, and the boys could joke about the awkwardness. Admittedly, this was largely due to Taecyeon and Nickhun’s fluency in English. They could acknowledge when a word or phrase had a different connotation for English speakers, and they could also joke in English about the obligatory things they had to say, like advertising for JYP. Moments like these establish a shared understanding, putting the international audience at ease. SHINee and Super Junior, unfortunately, seemed to take a backseat in their Hangouts, because the separate host did most of the talking and there were long gaps for translation. 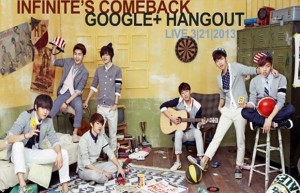 An English-speaking member is not necessary to have a fun Hangout, though, as long as the group hosts on their own. In Teen Top’s “Shake” Hangout, L.Joe hosted partially in English, and the rest of the members took the fun, crazy approach utilizing what English ability they had at every moment. It’s unclear if there was other translation for the participants, but the boys did an impressive job communicating with the fans on their own. Infinite utilized a mystery translator and demonstrated very little English ability, but they took time to understand what the fans were saying, and therefore were the most successful at the appearance of a real conversation. However, the watchers were cut off from half of it, because they could not see the translations. As of this writing, neither Woolim nor T.O.P Media has included subtitles with the uploads

The second cause of awkwardness comes from fandom, and fans vying to convey their love to these groups. The Hangouts that tend to be more natural emphasize Q&A, but many of them revolve around a theme where fans show something to the idols. Fans from all over the globe express themselves through fan art, song covers, dances, cakes and other creative formats. For once, the spotlight is on the fans and gives them a chance to make an impression on the idols. This itself is not a bad thing, and the majority of fans have been creative and courteous, but seeing these displays reflected in detail over video can be awkward for the spectator. “Secondhand embarrassment” is a phrase that flies around the video comments. 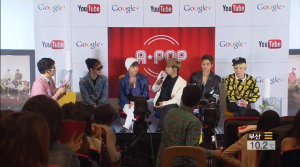 Of course, this is more of an issue for the watching audience. Companies encourage and orchestrate these displays because in order to appear on the Hangout, fans typically have to demonstrate their love in some way. The bands say thank you, are appropriately impressed, or shout “I LOVE YOU!” like Teen Top did. For spectators, “secondhand embarrassment” might be another thing that cannot be extracted from these Hangouts, and all there is to do is grin and bear the random outbursts of “oppa” or “saranghae.” Everyone would do it if they had the chance.

Sometimes fan conduct is more deplorable, however, which greatly affects the tone of the Hangout. For example, in SHINee’s Hangout, one of the participants plagiarized another fan’s video in order to get into the Hangout. She has since apologized, and the plagiarized portion is cut from SM’s official upload, but it’s still sparking hatred in the video comments. Additionally, these Hangouts occasionally provoke the old Korean vs. International fan vitriol with which we are familiar. It is not my intention to rehash these old issues, but to point out that fans contribute half the content of these Hangouts and therefore their conduct is subject to greater scrutiny. SHINee’s could be viewed as the least successful, not only because of the awkwardness during the event, but also because of the continued fan reactions after, justified or not. These live streams are meant to be inclusive, but sometimes have the opposite effect, which creates a bad mood for the group and the fans.

So far, none of the Hangouts have been perfect and all-inclusive, and due to the inherent issues of live streams they probably never will be. After looking at these examples, it’s clear that certain practices, like letting the idols host, are more effective in creating a better atmosphere. For other issues, like the ephemeral “secondhand embarrassment,” it’s harder to imagine a solution. However, despite its problems, the Hangout effort has been a fantastic way to connect with an impressive array of fans. It would be beneficial and just plain awesome for K-pop groups to continue hosting them and refining the format.

I want to turn it over to our readers. What do you think works? What doesn’t? What would you propose for future Hangouts? Do you like them at all? Have you been in a Hangout? Talk to us!

For my two cents, the one thing I definitely want in the future is the banning of sunglasses during the Hangout (I’m looking at you, Onew and Eunhyuk).