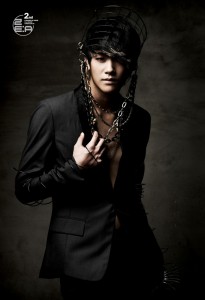 When ZE:A-Five announced the release of their first mini album, Voulez-vous, I thought two things: 1) ZE:A has a subgroup? and 2) Is that French?

Now, we all know that hearing English in K-pop songs nothing new — most songs and albums have English as well as Korean names, and the gratuitous insertion of English lyrics has become the source of many K-pop inside jokes and fandom slogans. While the presence of English in K-pop might weird people out at first, in the end we all get used to it, and even appreciate being able to confidently shout out some K-pop lyrics.

But ZE:A-Five’s usage of French does lead to the thought: what about the other languages out there? No, I’m not talking about the typical Japanese or Chinese songs made for those countries’ music markets — I’m talking about good ol’ random insertions of foreign phrases in Korean songs. Us English speakers might take K-pop English for granted, but what about all the fans who speak Spanish, French, etc.? Where are their languages represented? Well, here are some examples of non-English (and obviously non-Korean) K-pop song titles and lyrics you might have missed among all the English phrases.

While “Butterfly” might be an English word, this song’s Korean title (빠삐용) is the Hangul representation of the French word “papillon,” which is repeated throughout the chorus. I’m not exactly sure how “papillon” fits in with the rest of the lyrics — the poetic English translation can only get me so far when it comes to the song’s actual meaning — but I’m sure French fans were delighted to hear it. Not only is it a super catchy hook, but it is also pronounced correctly, which is something you cannot take for granted when it comes to K-pop’s use of foreign languages.

This song’s a double-whammy — Italian title and hook as well as some gratuitous French phrases. Narsha whips out some French in this song by repeating “Il fait très chaud”, which means “It’s really hot.” And not only is Narsha’s French really hot, but it even makes some sense in the context of the song — the first time she says it is after singing in English about how hot it is. And for those of you who don’t know, “Mamma Mia” is an Italian interjection used to express various emotions like surprise, joy, anguish, etc.

Props to U-KISS for using more Spanish than English in their song “Te Amo.” This song features not one, not two, but three Spanish phrases — “te amo” (I love you), “tu beso” (your kiss), and “amor love tonight.” Even if that last phrase is technically only 1/3rd Spanish, 2.33 phrases repeated throughout a song is still a lot more representation than most K-pop songs give to non-English, non-East Asian foreign languages.

When you think of SHINee and Spanish, your first thought might be of their single “Amigo.” And while yes, “amigo” is Spanish for “friend,” the song title is actually a shortened version of the Korean phrase “아름다운 미녀를 좋아하면 고생한다”, which means “If you love a beauty you will suffer.” So if you’re looking for some actual Spanish from SHINee, I’d suggest checking out “Señorita,” especially for Key’s little monologue in the beginning. Work it, Key.

And a special shout out goes to 2NE1’s “Let’s Go Party” for featuring the phrase “let’s go party” in four different languages (French, Japanese, Tagalog, and Korean) in the intro.

K-pop has had its fair share of English phrases scattered throughout songs even before the Hallyu Wave started really taking off. Considering English’s prevalence in pop culture around the world, random English phrases seem to be leveraged as a source of “cool points” regardless of their actual functionality. But now that K-pop has been gaining a lot more attention outside of Asia from non-English speaking audiences, it will be interesting to see if they adapt their foreign language lyrics accordingly. What do you guys think? What are your favorite examples of non-English/non-Korean phrases in K-pop, and what languages would you like to hear in the future?