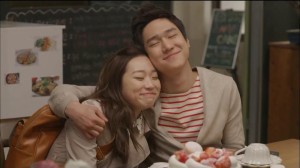 We said “goodbye” to February and “hello” to March last week and with the forthcoming K-pop Spring in the air it’s time to say goodbye to the deep chill of Winter.  Has the K-pop scene also been heating up?  So far, so good–I think March is gonna be a great month.  A couple of things that just missed the cut: J-Min‘s newest Japanese release “Heart Theater,” The Nuts‘ new song “Love Note,” Amoeba Culture teasing a Zion T song “Two Melodies” featuring Crush, the cute-but-anti-climatic ending of the K-drama Flower Boy Next Door, and this great interview of Big Bang‘s G-Dragon by Dazed Digital.

The following are the top 5 Things I LOVED that happened in K-pop last week.  If you’re not up-to-date on your K-pop and tend to get upset at someone spilling the beans–go no further because beans most definitely have been spilled.

On the last episode of The Voice Korea Season 2, one of the contestants Kim Eun-ji, did an awesome version of DBSK‘s “Mirotic”  impressing judges Gil, Baek Ji-young and DBSK sunbae Kangta–who she eventually picked as her coach. There were a lot of great contestants vying for a chance on the show and it was surprising that many weren’t selected.

The top list on last week’s Weekly Idol was the Male Idol who could dance Best Girl Group choreography.  The top 7 were: #7 B1A4‘s Baro, #6 Block B‘s P.O., #5 SHINee‘s Taemin, #4 ZE:A‘s Kwanghee, #3 2AM‘s Jokwon–I couldn’t believe Jokwon was #3 although maybe he’s too much kkap, but I also think it’s because 2AM has been gone for so long, #2 INFINITE‘s Sung-jong, and #1 SHINee‘s Key.  I guess I could see Key as #1, but I’m not sure if it’s a good or bad thing that two members of the same boy band are on this list.

One of the early favorites on K-pop Star 2, Two Thousand Won, did an awesome cover of SISTAR‘s “Alone” on last week’s show where the Top 8 were cut down to the Top 6. They almost didn’t make the cut as they were up against the other popular duo, Akdong Musician, and were sent into the wild card round where they were lucky enough to earn one of the two wild card spots that would move them into the next round.

2. The Huntresses are coming!

Ha Ji-won, Kang Ye-won, and the Brown Eyed Girls‘ Son Ga-in are starring in an upcoming Korean movie called The Huntresses.  The movie is set in the Joseon era and they are three kick ass female bounty hunters.  Think Joseon Charlie’s Angels.  The trailer has just been released and it looks like it’ll be a lot of crime fighting fun!

Last week on Immortal Song 2, they were honoring the songs of Moon Joo-ran, who debuted in 1966.  The Brown Eyed Girls‘  Narsha chose Moon’s debut song “Song of Dongsook” to perform and I just loved everything about her stage–she did such a stirring rendition of the song.  Unfortunately, it wasn’t picked as the winner, but Narsha’s a winner on 5 Things.

Those were the 5 Things I LOVED inK-pop last week, were they yours?