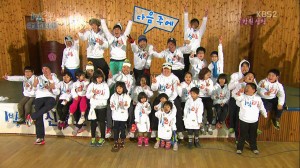 Happy Lunar New Year! Hope you all had a great start to your new year. It was a bit quiet as everyone was busy with Seollal, but there were still things to love about the last week in K-pop. There were the conclusions of the K-dramas The Great Seer and Jeon Woochi and tvN‘s variety show Romantic and Idol. Which after the finale maybe should change it’s name to Romantic and the Brutal Idol–never thought I’d feel so bad for G.Na on a dating show. But it was pretty sad all around as only one couple came out of the finale Jewelry‘s Yewon and BTOB‘s Minhyuk–I think Jonghoon‘s crush on Yewon was a bit too real and burdensome for her, whereas Minhyuk was comfortable. A couple of my fave things that didn’t quite make the cut: Olympic medalists Jang Mi-ran, Choi Byeong-chul and Hwang Kyeong-sun visiting the cast of 1N2D; the release of Daesung aka D-Lite‘s full PV of “Utautai No Ballad” in all of its six and a half minutes of glory; and Yonghwa and Jonghyun celebrating C.N. Blue‘s win on Music Bank by doing push ups while singing during their encore performance (following the push up show of Minhyuk and Jungshin for last week’s win).

The following are the 5 Things that happened last week in K-pop that I loved a little bit more than the rest. Spoilers definitely lie ahead so if you’re not current with your K-pop and don’t like ruined surprises–turn back now.

One of the top B-boy crews in South Korea, JINJO Crew, brought their skills to Star King and put on quite a show.

They also did a dance battle with Kwang-hee, but the battle between old school b-boys Kim Jong-min and Eun Ji-won was super hilarious. It also just goes to prove that as you get older your body just doesn’t always cooperate with you.

SHINee released a special for the Lunar New Year, SHINee’s Wonderful Day, where they essentially all got to pick one place they wanted to go to and have some fun. Key and Minho chose to go to England, but for totally different reasons. While Key was hitting up some record and clothes stores, Minho traveled to Sunderland to see the legendary Park Ji-sung play soccer with his club Queens Parks Rangers as they took on the Sunderland AFC. It’s always cute to see an idol be a fan themselves. I got a bone to pick with SM, I distinctly heard Onew say that he wanted to visit Hawaii first, but instead they sent him to Thailand.

On their recent camping trip, the kids of Dad! Where Are We Going did some ice fishing with their dads and got to taste their catch, their really fresh catch.

Yoon Hoo and the way he tentatively tries the fish is just too precious. The show is apparently doing really well and even had a new year’s special that aired on Saturday and included interviews with the dads and some cute behind-the -scenes cuts.

The new We Got Married couple of 2AM‘s Jinwoon and actress Go Joon-hee debuted on the latest episode of the show. As a long time fan of the show, I have to say that Jinwoon’s introduction to his new virtual wife has got to be one of the best. Hopefully, this new couple will be a good match for the show.

Level 7 Civil Servant is my #1 K-drama at the moment and while it isn’t perfect it is still a lot of fun. I have really enjoyed Joo Won in this K-drama, it’s great to see him in a lighthearted drama than in one of the makjang types, although he is awesome in them. In this scene from episode 6, we see that in some cases the more, is definitely not the merrier.