Side B: A Sweet Melody in Kara 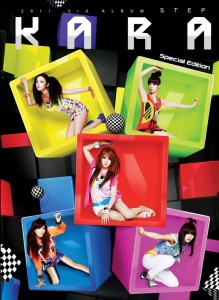 Debuting back in 2007 along with fellow contemporaries Wonder Girls and SNSD, it’s pretty jarring to think that Kara — with members Gyuri, Seungyeon, Nicole, Hara, and Jiyoung — is one of of K-pop’s oldest girl groups active in the industry. In terms of seniority, Kara is only beaten by the Brown Eyed Girls, CSJH The Grace, and Jewelry, and even then, among these senior acts, only the Brown Eyed Girls have truly remained stable and consistently active, with the latter two being crippled by unbearably long hiatuses or unrecognizable member changes.

Throughout their almost six year long career, it seems like the group has experienced only minimal changes especially in comparison to their more dynamic rivals. After their initial image change following their debut album The First Blooming, Kara took on a more innocent and cuter girls-next-door image, an association that has stuck with the girls for the rest of their trajectory. With the group’s sound, it has also stayed relatively the same; their lead singles have been highly addictive, 80’s inspired tracks courtesy of their trademark producer Sweetune, and their B-sides have been laden with girly and unbearably cute bubblegum pop. While Kara is definitely best known for their insanely catchy and likable title tracks, today I’d like to highlight the more notable B-sides in Kara’s discography, tracks often overlooked and unnoticed that offer a whole other side to the very familiar group.

Kara originally debuted as a four member group in 2007, made up of members Sunghee, Nicole, Gyuri, and Seungyeon. Needless to be said, the Kara of debut and the Kara we know today are wildly different from each other. First of all, contrary to what their recent discography may reveal, Kara originally debuted with a more masculine, R&B inspired image, complete with the more boyish clothing and a heavier, sassier sound. Second of all, there was the presence of ex-member Sunghee, who would eventually quit following the group’s first album, for educational purposes, and only to be replaced by the more famous Hara and Jiyoung.

The presence of Sunghee brought an entirely different dynamic to Kara, allowing the group to carry a more mature air and an exceptional and diversifying line of vocals. Sunghee was a complete vocal powerhouse, and her huskier vocal tones added some much needed contrast from the more delicate vocal complexions of the rest of the girls. Following Sunghee’s departure and the addition of Jiyoung and Hara, there was a complete change of dynamics to the group, a change some argue Kara has never really recovered from.

“Don’t Be Shy” is a track that perfectly encompasses Kara’s image during their debut era, and the differences in style and execution from their current material are blatant. A mellow R&B inspired track complemented by the classy musings of a piano and the dramatic cliffs of horns; it’s a track that differs greatly from Kara’s more recent projects but is yet a track well worth listening to. The girls’ execution is absolutely compelling and perfectly fierce, a testament of their prowess as a rookie group. From Nicole’s slightly nasal vocal complexion to Seungyeon’s lighter, more delicate timbre, the distinctions in the four girls’ vocals are highlighted and stressed, creating a very intriguing and dynamic listen. Gyuri and Sunghee in particular work perfectly in this environment, their richer and more distinct vocal tones taking full center in the song, with their commendable vocal acrobatics not going unnoticed either.

With the addition of Hara and Jiyoung following Sunghee’s departure, as described, Kara went through a major change in dynamics. While Sunghee’s powerful vocals and the girls’ more empowering image was definitely missed, ultimately the choice of having Kara opt for a more childish and cute image worked to their benefit — it was Kara’s first major step toward becoming the major K-pop force they are today. While Kara’s more saccharine sound is not everyone’s cup of tea, “What’s This,” a track in the group’s Rock U mini album — their first comeback following The First Blooming — shows that despite the loss of their main vocalist, Kara didn’t necessarily face a drastic musical decline.

“What’s This” is a cute and delicate track, establishing the new image for the reformed Kara. The track, despite its cutesy vocals and chipper instrumental, keeps from crossing the line of being annoying through its more grounded sound and its stable vocals courtesy of Gyuri, who had stepped up as one of the group’s main vocals. The track is catchy and fun, showing the brand new Kara in their absolute best, being in an environment they could work naturally in.

Admittedly, Kara isn’t the most vocally skillful group. As a whole, the group is continually critiqued for unstable live performances and weaker vocals, and with their similar vocal tones, the girls’ voices have a tendency to blend with each other rather than complement each other. But while Kara isn’t the most vocally proficient group, that doesn’t mean the group is completely deprived of vocal skills. In fact, Gyuri, Seungyeon, and Nicole are quite skillful vocalists, and when utilized right, even Hara and Jiyoung can sound quite lovely as well. “I’m…ing” is such a track that makes good use of the group’s vocals, and while it was originally found in the girls’ Pretty Girl mini album, I much prefer the acoustic version released along with the girls’ Step album. With nothing but the quiet murmurs of the acoustic guitar behind them, the girls sound wonderful, with each of them having their time in the spotlight in an uplifting song.

In contrast, “Burn,” a track off Kara’s Jumping mini album, had the girls attempt a grittier and sassier song to quite a bit of success. “Burn” impresses with its sultry, electronic-based instrumental and Kara’s more brazen execution, a refreshing change in pace from their chipper repertoire. The verses have a very refreshing brassy feel as the girls glide through their lines with fierce conviction, and the chorus is heavily dynamic yet catchy at the same time. Sudden changes in the pace keep the abundant repetition of the song from becoming grating, making for an intriguing yet amicable listen. Nicole and Gyuri absolutely shine in this song — Nicole’s sass is perfectly delivered and Gyuri’s boldness is expressed clearly.

Similar to the busy sounding “Burn” is “Rider”, from Kara’s Step album. Much like “Burn,” “Rider” has Kara handling pure electronic dance pop, though Rider’s instrumental is considerably more complex. However the instrumental’s convolution is balanced by the song’s smooth progression and flow, making for an unusual yet dynamic piece. The verses are easy to follow and they flow freely into a bridge before settling into a very subdued chorus. The contrast between the vocals’ smooth texturing to the instrumental’s jagged nature also make for riveting components. Once again, the hook is addictive, and the girls’ vocals are tinged with the slightest touch of processing, giving them a mechanic feel that matched well with the song.

Also from the Step album is “Date (My Boy).” Other than their likable personalities, addictive songs, and/or their infamous “butt dance,” Kara is probably best known for their undeniable success in Japan. And as Fannie put in on our Exchange on Kara, even before expanding into Japan, Kara had already embodied a very Japanese-influenced image and sound, thus needing to adjust very little for their wildly successful endeavors. “Date (My Boy)” demonstrates this very style of sound; it retains some classic signatures of J-pop from its hollower, lighter sound to the more chipper and progressive instrumental. These elements work amazingly with Kara, who are able to pull it off so naturally. The track is once again very cutesy and aegyo-laden, yet it stays easy on the ears by ways of its delicate and airy sound. The song is an overall natural and laidback yet impressive listen courtesy of Kara.

Lastly, there is “Strawberry”, also from the group’s Step album. “Strawberry” offers nothing really new for Kara, however it shows the group in its most crisp state. A sweet and uplifting song, the melody retains almost all of Kara’s signatures played in succession, while retaining a very cohesive and structured progression. From the subtle harmonies in the beginning and end, to Nicole’s whispered raps, and again to the sudden yet effective change in pace, the song clearly has a lot going for it. However, it’s neatly tied together by a ridiculously fast beat that allows the elements to gently breeze through without any notice, giving the song an overall fleeting feel.

While Kara’s title tracks stand out among its discography, it can’t be denied that the group has made some pretty impressive B-sides as well. And while their sound has only experienced minimal changes of the years, their growth, improvements, and group dynamics are becoming exceedingly clear, fully justifying this leading girl group’s top status in Hallyu.

And that’s a wrap! I hope you enjoyed this installment of Side B. Feel free to give us your personal recommendations below!