Jaejoong's "Mine," is Not Another K-pop MV

Having long-standing familiarity with the genres of goth-rock, visual kei, J-rock, and lyrical metal, I was anticipating Jaejoong’s new single “Mine” with bated breath, and especially more so after seeing the teaser. I grew up listening to Dir en Grey, Malice Mizer, Nightwish, HIM, Gackt, among many others, and I find this to be just perfect in laying the ground to appreciate this JYJ member’s latest work. In this context, I’d say that Jaejoong has moved away from the usual K-pop fare, coming up with an inspired piece that is rather like fantasy goth-rock. Warning: what follows is a review of an MV that is not K-pop, if you expect the song to be as such, you will be disappointed.

Jaejoong had always been the odd one in DBSK, with a long history of anti-fans and what was originally perceived as personality problems. It took him longer to find his footing in the world of K-pop than the other members, and even then he seemed the most out-of-place in the pop concepts. With this release, it feels like Jaejoong has finally found himself, and this was the type of song and image he should have had all along. It feels right somehow, which makes sense considering his lingering interest in J-rock. Even to someone like this writer, who has never been a follower of DBSK, it’s wonderful to see an idol become a solo artist in a manner that feels genuine.

The imagery in the video is classic goth and fantasy, a series of engaging, monochromatic scenes of symbols and creatures. For the reason that these specific backgrounds and images have found their place in today’s fantasy genre (across various forms of media), the MV escapes coming across cliché and antiqued. Fangs, owls, wolves, chains, crows, forests, and masks, are undeniably linked to goth-rock, and even darker fantasy stories. Much like the modern variety of artists and bands playing the genre, Jaejoong is drawing on accepted and understood symbolisms to drive “Mine.” 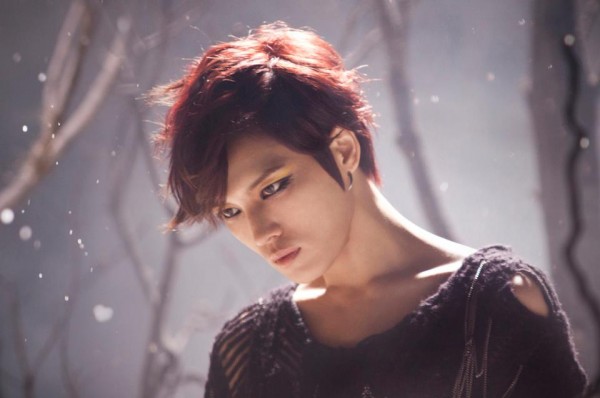 Delving a little deeper, let’s consider Jaejoong’s choice of wearing false fangs. Way before Twilight or “emo” teenagers wearing fangs was ever a “thing,” Peter Steele, the lead singer of the band Type O Negative, was having his teeth changed permanently to fangs. The attraction to the animalistic (and sometimes vampiric) meaning of fangs isn’t unusual for singers in the darker rock genres and Jaejoong follows in these footsteps. He doesn’t use the fangs to fake drinking blood, or anything else associative like that, he simply has the fangs as a part of himself, a part of his character. Extending beyond that of representing a vampire, Jaejoong’s persona in these scenes seems to be of a fallen angel, who happens to have fangs.

On the subject of clichés, for anyone feeling like this MV is corny, you need not look any farther than long-time lyrical goth-metal band Within Temptation to see that the groups in the goth-rock genre have a history of MVs that fall into the corny category. Although Jaejoong’s MV is far from corny, it has been unavoidable (and perhaps slightly unfortunate) that people have come to associate the aforementioned images as such. In this vein, it’s a consolation that “Mine” comes under classic goth-rock and a splash of visual kei, and is a leap from the cornier J-rock ones in the early 2000s. However, in Within Temptation MVs and Jaejoong’s MV, it isn’t how the symbols and images are presented that is important, it’s the meaning they hold. 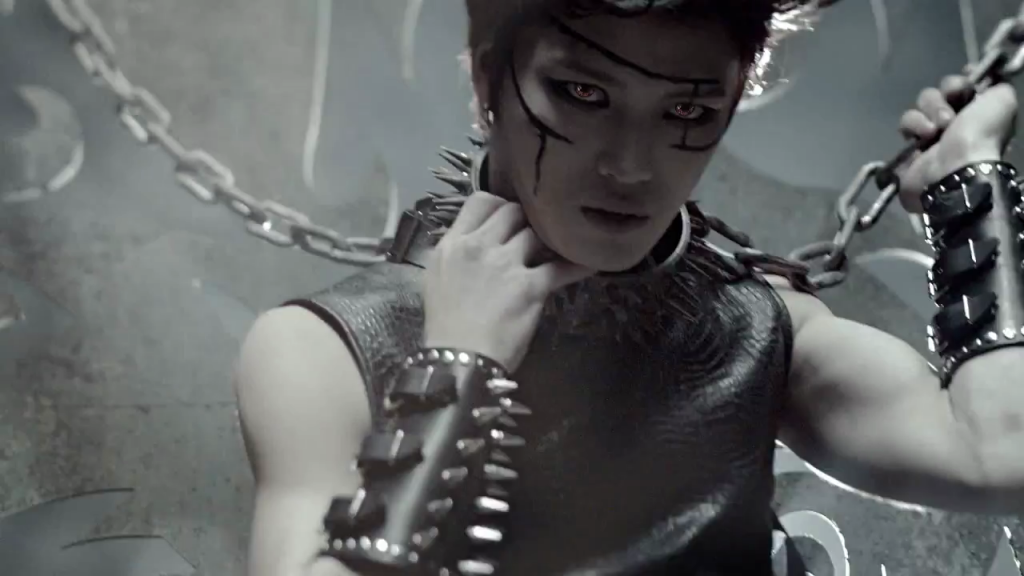 Now, let’s talk about the classic symbols that appear in “Mine.” The owl and the wolf are animals that appear in the MV in solo shots — so, what do these animals represent? Owls, depending on culture, are the keepers of souls as well as a symbol of wisdom, secrets, messages, and mystery. The wolf is a communicator; it symbolizes cunning, loyalty, intelligence, and compassion. Likewise there is meaning to the other animals seen in the MV, serpents are a symbol of creativity and the cyclical nature of the world, and crows are associated with ingenuity, change, and transformation. Despite having so many positive meanings in many cultures, these animals also have a bad reputation because of their associations with violence, nighttime, and death. Jaejoong himself has often been judged negatively, despite his true nature, as an individual and during the JYJ lawsuit. In a parallel understanding, he was likely to have sought these traits and connections to portray a strong, personal message in “Mine.”

Also in correlation with the lyrics, Jaejoong seems to be struggling against something, or someone, for a good part of the MV, both internally and physically. In one sequence, he is literally chained by the neck to a giant metal structure and as soon as the chains were broken free, the scenes cut to one of him running. Choppy as it may seem, it’s both interesting and more realistic than not, to see Jaejoong running to escape his bonds. The clanking of the collar onto the ground is a definitive moment that is given focus, signifying freedom. 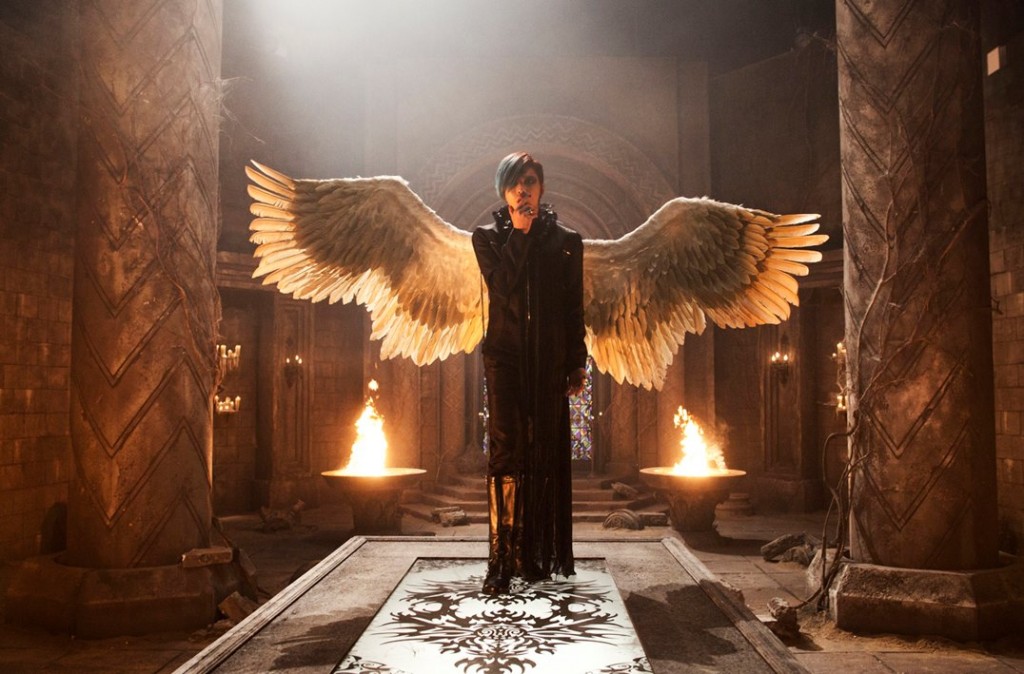 Similar to his escape to freedom, at the end of the MV Jaejoong spreads his wings to fly away. Wings bring to mind the ability to take off, which in essence refers to being able to go wherever one wants. Wings also signify success, the moment/s when one finds their calling and takes it on. This is directly symbolical of what Jaejoong is doing with this MV and album. Despite the ideologies drawn from the project, I do have a few gripes. The wings would’ve been portrayed better if they were made of real feathers on a frame, instead of being generated by computer graphics, but with the ease of using computers today it’s hard to expect any high budget MV to bother with the difficulty of all physical props when there is the convenience of computers. Also, it was a good move to use real snakes as that gave the MV a more realistic and tangible feel. If any props had to be computer generated, the wings and the colorful eye effects were the most understandable due to the difficulty involved in pulling them off any other way.

Stepping away from the deeper meanings for a second, may I just say what fabulous outfits this MV has! The diamonds on his face forming a mask; the long black fringe trailing off his clothes in the fangs scenes; the very brief but very classy all black outfit (+ awesome boots) in the scene with crows; the pleather backless number and the spiked bracers when he was chained up; the chain-mail shirt and odd sci-fi hat/mask (anyone else get The Fifth Element vibes?). And, very fetching of course is the lack of clothing in the tattoo scene. The very obviously Bane mask was the only downfall, because a more unique mask would’ve downplayed its Hollywood-ness, which in this case is more preferable. The hair and makeup choices for the MV were also spot-on, accenting the mood and complimenting the rest of the styling without overwhelming it. 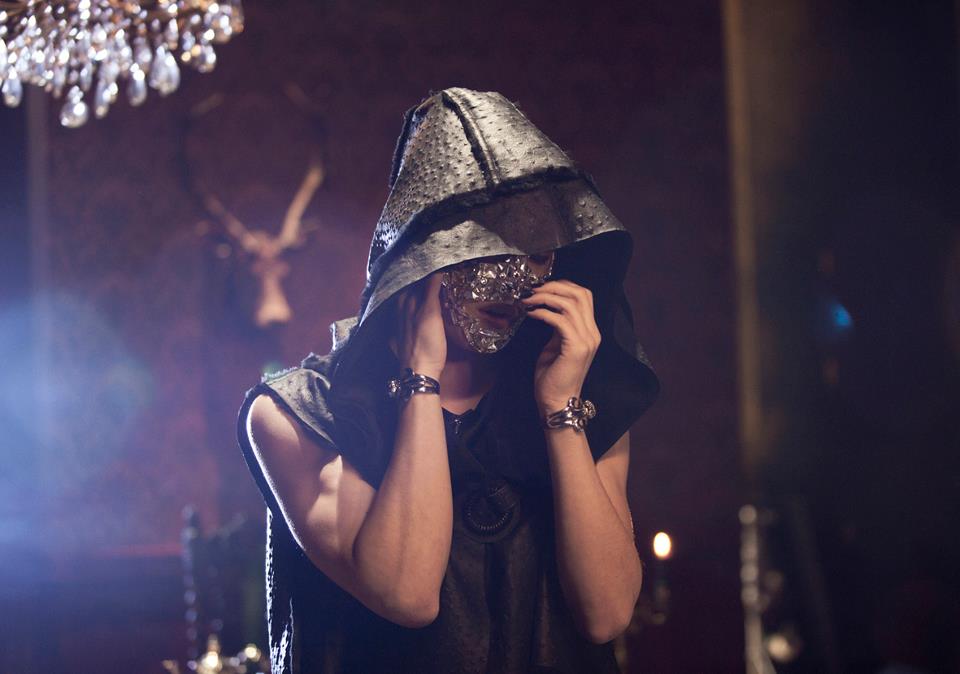 It isn’t hard to imply meanings from this MV; what with Jaejoong’s troubled past in the K-pop industry (and personally), there could’ve been plenty of things that he wanted to escape from over the years. With a song that basically says “don’t rain on my parade”, it’s quite clear that Jaejoong is tired of people stifling him and his creative freedom. The more fantastical and intense world of a goth-rock artist will likely suit him better than the life of a produced K-pop group member. He is already proving himself to be familiar with the genre (or at least choosing people to work with that are) and the image that the genre generally comes with, so fans (like me) can feel comfortable with this release and not feel like he has botched the goth-rock image.

Overall rating 4.75/5 because there were a few things that could’ve been better, but mostly an impeccable MV to begin Jaejoong’s solo career with. There are a million more things I could say about this MV, but let’s just leave it at this; I expect many more great things from him.