Boyfriend's Sexy Image Will Have You Shouting "I Yah!"

Boyfriend, of Starship Entertainment, is back with a repackage featuring a new song called “I Yah,” an intense rock-dance track which follows the trend of their last release, “Janus.” The MV features Kim So-Hyun, a child actress who began her career on TV in 2006 and whose most memorable role has been as the crown princess in Moon Embracing the Sun. The homme fatale image Boyfriend is going for these days fits them well when it comes to wardrobe and dancing, but as far as acting the part goes in drama scenes, they could use some work.

The concept of the MV was a bit over-acted in that it felt like a drama or an anime as opposed to feeling like real emotions. The situations were so cliché that it was hard not to focus more on the image the members were trying to depict than actually feeling the emotions they were portraying. For example, the intro scene has all the members sitting together (at what is presumably their school) and laughing, and which, sadly, is so awkwardly acted that it is almost painful to watch. It is reminiscent of one of the moments when you see your arch-nemesis at school and you tell your friend, “hey, pretend we are talking about something funny,” to make it seem like you are having a good time; it’s fake, in other words. 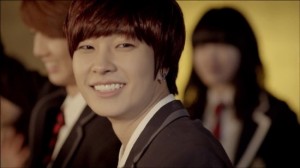 The most convincing acting in the MV, from the members, came from Jeongmin, whose facial expressions were believable and dynamic, although that strange moment when he jerked away from the girl’s hand was confusing, to say the least. He hadn’t even seen her come in, which means he didn’t know who it was, so does he just jerk away like a weirdo when anyone touches him? Odd choice of action to express his edgy manliness, but effective enough in scaring her into loving him, I suppose. Kim So-Hyun’s acting was certainly the best overall, but that is to be expected as she is a professional actor. Her facial expressions in reaction to the situations with the members were excellent and it felt like she was a real person, as opposed to feeling like she was an over-acted character.

Donghyun and Kwangmin’s parts were such archetypal portrayals of young man in Asian school dramas that it was almost laughable. Now, if you are from Korean and aren’t a foreigner these archetypes may be all you were familiar with growing up, and in that case they would seem perfectly normal and probably sexy, but as a foreigner, seeing a high-school student kick a desk because someone else is talking to the girl he likes is a bit ridiculous. Can’t you just here Donghyun yelling, “Yah!” as he does that in the MV? His facial expressions were actually pretty good, it was mostly the flow of events (kick desk, make scary face, hold girls hand) that seemed off. 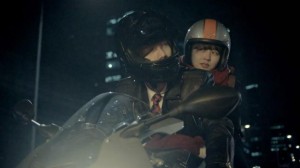 As for Kwangmin, his character reminded me of a Japanese drama called Yūkan Club where the main male character was an aloof bad boy who was always late for school and rode his flashy motorbike everywhere (the lead actor was the reputed real-life bad boy Akanishi Jin) and that is all I can think about when I see Kwangmin in this MV. It seems to be a stereotype that rich young men who are “bad boys” all own a motorbike and are perpetually breaking rules to suit themselves. That bad boy impression is what the entire MV is giving about the member’s characters, and although a common one in pop Asian media, it still seems a little extreme considering Boyfriend’s previous cute image (“Janus” excluded, but in that they weren’t being bad boys per say). Perhaps they are trying to express that they can be the cute type of boyfriend as well as the aloof, manly type of boyfriend in order to ensnare all the women’s hearts (not just the ones that like aegyo).

The dance scenes were much more believable and Boyfriend did not disappoint with their ever interesting and in sync dance routines. The darker concept, continuing on from “Janus,” suits them wardrobe and makeup wise, not necessarily better than their cute image but just as well. The vinyl black jackets and skin-tight pants combined with the hip-thrusting and crotch-grabbing certainly bring “sexy” to mind, and it doesn’t feel forced when they are dancing, it feels like the most natural thing in the world that a seventeen year old boy would be a sexy dancing machine. Speaking of Minwoo, his pin-stripe pants with suspenders hanging from them were excellent and my favorite item of clothing in the MV. All the outfits were sexy without being over the top and there was a good combination of refined sexy (Donghyun’s long coat) and edgy sexy (all the bright design shirts under vinyl). 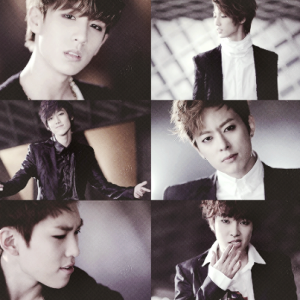 The partner dance moves used for this MV were also interesting, such as when the members reached their arms around each other to create a four-armed person, or a caged in person, take your pick. Although it isn’t in the MV, in the live version they also do an impressive partner lift, or flip, which is something I haven’t seen in K-pop recently. On the topic of dancing, the camera work for the dance scenes in the MV has a unique way of portraying the movement. The camera would jerk in whatever direction the dancer moved in which made the camera seem like it was attached to the dancer, perhaps on the hip, so it could accurately pick up every body roll. Some people may find the jerky camera work unappealing, but emphasized the direction and flow of the dance moves more than a standstill camera shot would, which is enough to win me over. 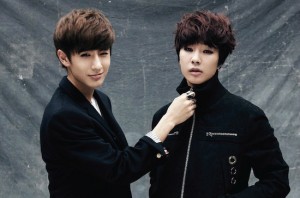 This was a good effort by Boyfriend to continue their new darker image, the song was upbeat but in an edgy way, their outfits were sexy but also classy (no mesh for these boys), and they expressed themselves well in their dance scenes. The song is also very catchy and Hyunseong and Youngmin held up their parts vocally with ease and a good dramatic flair. Although the acting in the drama scenes wasn’t top notch it also wasn’t terrible, and considering this is still a relatively new image for Boyfriend and most of the members are quite young it is easy to forgive some of the overacting and clichéd moments. Overall rating 3/5

What do you think, readers, do you still like Boyfriend’s darker image? How about “I Yah,” do you prefer it to “Janus”?