Almost two years after releasing “Perfection”, Super Junior-M is finally back with a new single and their first full-length original album, “Break Down”. Now, I’ll openly admit when it comes to Super Junior-M, absolutely nothing will replace “Super Girl” in my heart. It was the song that introduced me to/got me obsessed with Super Junior-M (and consequentially the rest of Super Junior), and to this day remains one of my favorite Asian pop songs of all time. So “Perfection” had a lot to live up to. But with the loss of Han Geng and the addition of two members, it was clear that “Perfection” was more of a trial period than anything else. So though I enjoyed the song/mini-album, I had hopes that by this comeback the group would be a bit more secure in their new status quo and would release a kick-ass single that would blow me away like “Super Girl” did.

And I have to say, SM did not disappoint. While it has yet to dethrone my favorite SJ-M song, “Break Down” is a very, very strong contender. At the very least, it’s way more complex and polished than “Perfection”, and even “Super Girl” (though my biased heart will never admit it). But while it’s more mature, futuristic sound is a great way to kick off 2013, the rest of the album is unfortunately less innovative — it sounds more like something that would be at home in 2003 (or mid 2000s, at the latest). And on that note, here is my review: 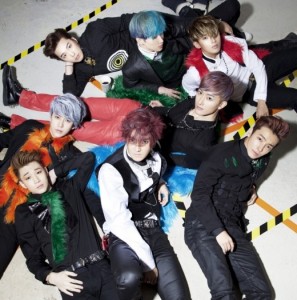 This song alone is restoring my hope for SM’s musical future. The EDM is new and refreshing, and I love hearing the interesting nuances of an instrumental that isn’t completely repetitive like most pop songs. And instead of having just a few phrases repeat over and over again (as in “Perfection”), the vocals in “Break Down” consist of various melodic lines that build up and get more diverse with the song’s progression. And the line distribution was a little better in this song than in “Perfection” — while I wish Sungmin and Siwon had gotten more lines, I appreciated the way they were able to incorporate Eunhyuk without depending on an awkwardly inserted English rap, and I especially appreciated the stronger presence of the actual Chinese members, Henry and Zhou Mi.

But most importantly, I love “Break Down” for its exercise in moderation. I appreciate how much smoother the song sounds compared to the characteristics and autotune overdrive that was “Perfection”. And while I normally hate K-pop’s sporadic insertion/abuse of dubstep (*cough*Maxstep*cough*), I feel in “Break Down” it was featured much more appropriately than in previous attempts. I’ve actually been looping the dubstep breakdown that occurs when Zhou Mi and Ryeowook sing the words “You’re breaking me down” (SM I see what you did there, and I approve). While the choruses might not be as hard-hitting as that of “Super Girl” and “Perfection”, I’m glad SM has finally realized that louder and noisier does not equal a better or more innovative sound.

Apparently this song was written by Zhou Mi and produced/composed by Noize Bank, which is a production team featuring SJ-M’s very own Henry Lau, as well as Gen Neo, Neil Nallas, and Isaac Han. It might not be as innovative as the lead single, but it’s a good follow-up as a very smooth, light pop song that doesn’t rely too heavily on being loud and electronic to be catchy. The dubstep in the song feels a bit more out of place here than in “Break Down”, and I guess was inserted in an attempt to modernize the song and give the rappers something to do. I’m not a fan of forced dubstep, but I do appreciate the way it’s been used as a key change, which strikes as slightly cleverer than most dubstep gimmicks. Slightly. Though “Go” is more reminiscent of American pop in the mid 2000s (it would sound right at home in the soundtrack of a 2005 American teenybopper movie), overall it’s a pretty solid debut for Henry’s production team. The song also carries with it a more mature sound, one that is an advancement from his solo on SJ-M’s previous album.

Despite having difficulty getting into ballads, I appreciate how this one is lighter compared to the dramatic ballads that can be a struggle to listen to. The melody is sweet and a nice display of the group’s vocals, and I especially like how they were able to properly incorporate Sungmin and Eunhyuk in this song. It’s not exactly unique, but it’s pleasant to listen to as the standard group ballad of the album, a nice change in style after listening to “Break Down” and “Go”.

I guess in addition to having a standard ballad, every Super Junior release needs to have a standard bubblegum pop track, and this one is it. Unfortunately, this song doesn’t particularly stand out. Honestly, it reminds me of a less bubbly (or even contrived) version of  “True Love”, one of the songs on SJ-M’s previous album. I know “A-Oh!” was attempting to be an “electronic modern pop song”, but considering “Go” already fulfills that role, it sounded more like filler to me.

This song was also written by Zhou Mi and produced by Noize Bank, and you can tell Henry had a hand in composing this because it is a lot closer to the bubblegum pop sound that was in Henry’s “Perfection” solo, “Off My Mind”. But while “Off My Mind” was appropriate for 2011, this song is the epitome of cheesy early 2000s pop — from the chord progression, beat, and melody to lyrics, the song got me blushing from its corniness. If a boyband song could have aegyo, this would be it – I can just imagine the members of Super Junior-M doing choreography to this song featuring lots of “bbuing bbuing” and displays of heart signs. This cute, bubbly love song sounds tailored to middle schoolers, and I’m going to openly admit that I’m a sucker for songs like that. So sue me.

I’m glad SM has continued putting effort into SJ-M’s albums through collaborations with well-known singers/composers: first Jay Chou for the “Perfection” mini-album, now Michael Wong for this album. Considering how Zhou Mi is a vocalist and an actual Chinese member of the group, I’m glad that the song’s been given to him. Guy does not get nearly enough lines as he should. The song showcases his voice quite well, and while this ballad is pretty decent, I hope he gets the opportunity to record more challenging and impressive solos in the future.

This more R&B feel is something I am not used to hearing from SJ-M. But I’ve got to say, I love it. It definitely isn’t “Sorry Sorry Answer” sensual, but the light, sultry instrumental does combine with some smooth and dreamy vocals to make me melt. After hearing nothing but ballads or dance pop, seeing this side of SJ-M is extremely refreshing, especially since this sound just works so well with their voices. This is probably one of my favorite songs on the album, and I want to see SJ-M expand their musical variety with songs like this in future releases.

For all its MAMA-like fanfare in the intro, the song is actually a bit reminiscent of SHINee’s “Love Like Oxygen” (especially the chord progression in the chorus). The beat follows the earlier 2000s feel of the other tracks and sounds like something I would’ve expected off of Super Junior-M’s first album. Then again, it is an OST for a historical movie, so it can’t exactly pull off the innovative and futuristic feel of “Break Down”.

I was hoping that this first full-length album would leave me with a clearer vision of Super Junior-M’s future, but after hearing these eight songs (the last two tracks on the CD are just instrumentals of “Break Down” and “Distant Love”) I think I’m actually a little more confused. The lead single is the most progressive song I’ve ever heard from SM, but some of the other songs sound almost a decade behind, which has me wondering: what is Super Junior M’s true musical identity? Futuristic EDM or more retro cheesy like “It’s You?” No doubt, I did appreciate the overall cohesiveness of the songs, but the album could probably have been a tad stronger if the songs outside of the lead single had a little more variety, and not only ballads and mid-2000s dance pop. Full-length albums are a chance for groups to show a full range of talents without being limited to the time constraints of a mini-album, and I think Super Junior-M could’ve taken full advantage of that with more unique songs like “Tunnel” versus filler like “A-Oh!”

However, I enjoyed this album and think it does hold some promise for Super Junior-M’s future expansion. I think it’s really cool how Henry is getting more involved in the music-making process, and that Sungmin and Eunhyuk are slowly but surely being integrated more properly into the songs, and also that SM is continuing to hire huge C-pop songwriters for its Chinese subgroup. I also really appreciate how none of the songs appear to be try-hard attempts at portraying Super Junior-M as something it isn’t—no farfetched attempts at dubstep or the bubblegum C-pop emulation that was on the “Super Girl” album. While the rest of “Break Down” does not nearly live up to the hype of the lead single, I think it’s a solid effort, so I’m giving it a 3.5/5.

What are your thoughts? Let us know in the comment section below!