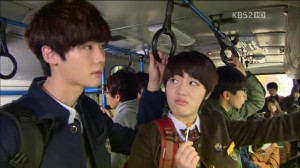 High school — just the phrase alone brings back memories of intense happiness, youth, first love, heartbreak, and a plethora of other emotions — is a common setting for Korean dramas. The ups and downs of a high school student’s life are relevant to the students in the audience, and sweetly nostalgic for the slightly older watchers. KBS‘s new drama, School 2013, brings to light typical issues teenagers deal with today at school, such as the challenge of getting good grades, bullies who just won’t back down no matter what you do, nosy teachers, and the overwhelming desire to fit in with the rest of their peers in a fresh and straightforward fashion with no frills. While the K-drama scene has seen plenty of high school-centric dramas before, it takes a lot of factors for one to really stand out. School 2013 is rising quickly on that list with solid acting and intriguing relationships between the main characters. 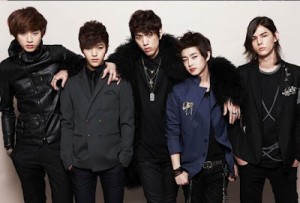 School 2013 isn’t the first high school drama I’ve seen, by all means. Most dramas involving young adults bring in high school some way or another; F4 of Boys Over Flowers attended their super exclusive private school and reigned supreme over the teachers and girls’ hearts (until Jan-di infiltrated the facilities, anyways), Kwon Ji-hyuk and the rest of Eye Candy almost got kicked out of theirs in Shut Up: Flower Boy Band, and Kang Baek-ho time-traveled back to his high school more than once to woo his best friend, Han Yi-seul in Operation Proposal. And then there are the dramas that focus more on the high school aspect, such as Answer Me 1997, God of Study, and Dream High. But while it’s really easy to show a select part of high school in a good drama, it’s hard to make one out of all showing all the different angles of high school while keeping the characters interesting yet believable. 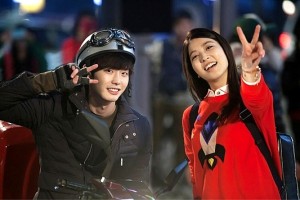 School 2013‘s formatting of the plot is most similar to God of Study. In both dramas, the writers create a handful of characters (enough for them to be able to work in different backstories of the characters but not enough to get too confusing) and show how their lives tie to one another’s. Instead of having a main loveline, there are multiple smaller ones, which I like because it keeps you from getting too emotionally invested in one character. So in School 2013‘s gang of characters, we have Go Nam-soo, the apathetic class president who has a complicated home life, Song Ha-kyung, the arrogant girl in the class who studies hard but has no interest in her fellow classmates, Lee Kang-joo, the tomboyish girl who seems to have a soft spot for Nam-soo, Park Heung-soo, the transfer student with a shady past ,and then the two teachers, Jung In-jae and Kang Se-chan. In-jae is the idealistic, semi-naive teacher, while Se-chan teaches to the test and doesn’t really care about the actual learning part. 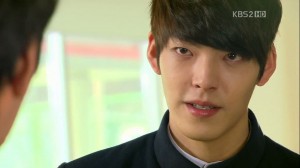 For the first four episodes, we get a good idea of what happens at Seungri High School, where the drama takes place. What we don’t get are backstories, which keeps us interested in the characters as we try to figure them out. Why is Nam-soo so apathetic? What happened between Heung-soo and him? Why is Ha-kyung such a bitch to her fellow students and why is she trying so hard when no one else in the class seems to care? What about Heung-soo? What’s in his past? Many high school dramas fall into the trap of making their character too simplistic and uninteresting by keeping them one-dimensional, but School 2013 looks like it plans to really flesh out each student’s story. 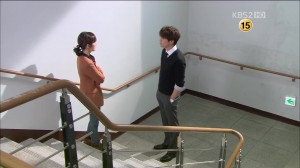 One of the biggest plotlines right now is the rivalry (or grudging partnership by episode four) between the two teachers. Because In-jae and Se-chan teach in such different styles, they disagree frequently on how to run the classroom, especially after they became co-homeroom teachers. In-jae is adorably idealistic and the teacher who really cares about the students’ lives outside the classroom, but her weakness is in her ability to exert authority. She is treated by the students as more of a friend than a teacher sometimes. On the other hand, Se-chan couldn’t care less about the wellbeings of his students. He sticks to the curriculum and does his job. Sometimes I’m not even sure why he teaches. He doesn’t seem to love his job like In-jae does, but for some unstated reason, he sticks around. I’m interested to see how the drama is going to develop his character (hopefully In-jae rubs off on him a little). At this point, I’m unsure as to whether there will be a romance between the two teachers, but as long as it’s not the central focus of their plotlines, it would be a cute addition. 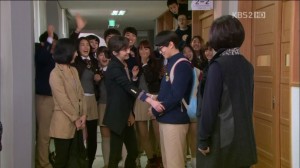 Two other really interesting points School 2013 brings up without any sugarcoating are disrespect and defiance between students, teachers, and the administration. When the drama begins, we know that the school doesn’t have a terrific reputation. Instances of violence and poor numbers trouble the principal. In fact, Ha-kyung, who attends a cram school at night in order to ensure her acceptance into Seoul University, is ashamed that she attends such a poor high school. Because the disorder causes prospective students and parents to turn their heads against the school, the administration tries to cover up some of the conflicts as something less serious. In episode two, when Young-woon, a student with a learning disability, throws a chair out the classroom window in an attempt to keep Nam-soo from being beaten up further by Jung-ho, the school bully, he is almost forced to transfer because the school didn’t want to reveal the fact that there was violence involved, not only destruction of property. However, In-jae stops the transferal in the nick of time, defying the principal’s desire to kick Young-woon out of school. The repercussions to her action are shown as Se-chan is appointed homeroom teacher in her place. Sometimes I feel like rash actions in dramas don’t amount to what they would in real life (not that we should expect them to), but it was a nice change to see something happen to the heroine because she broke the rules. 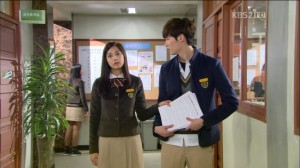 Disrespect, the other theme covered by the drama extensively, is also portrayed well. Nam-soo is disrespected by basically everyone around him except for In-jae, which is probably why he tends to show his protective side more around her. Ha-kyung treats him poorly at first because his grades aren’t good, but I sense a change in that relationship soon. Jung-ho’s bullying also makes him feel belittled, even though he’s not exactly scared of being beaten up. Nam-soo’s alcoholic father also doesn’t take care of him at all, so I find it very interesting that Nam-soo has a caring side to him, especially since it could have been very possible that he was beaten by his father (a potential reason for why he never fights back against Jung-ho). The disrespect Se-chan has for In-jae as a teacher is also blatantly shown through his interactions with her. I always feel like he’s talking down to her, because he thinks that he’s the better teacher between them. However, he doesn’t relate to the kids quite as well as she does. 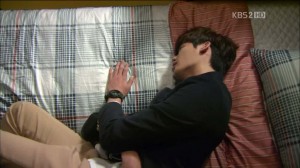 All in all, the first four episodes have been extremely strong. I’m already emotionally invested in the drama and its characters because of how good of a job the actors and writers are doing. Lee Jong-suk is doing a good job at controlling the amount of angst his character radiates (when he lay on his bed and cries while whispering, “It’s okay…” after getting beaten up made me want to cry with him), and the chemistry between Daniel Choi and Jang Na-ra is subtle and sweet. I’m excited to see how the students’ plotlines play out, especially the ones of Nam-soo and Ha-kyung, as well as the relationship between Nam-soo and Heung-soo. One of the best things about high school K-dramas is how easy it is to root for the characters, and the slightly darker tone of School 2013 makes it look promising, with just enough heart and grit to keep things moving along.

What do you guys think of this drama, Seoulmates? 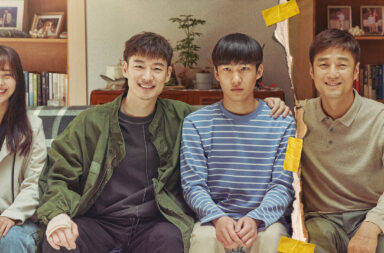