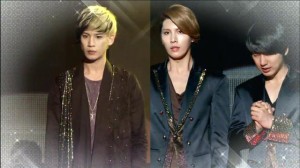 It’s a little over a week until that most wonderful time of the year, have you all finished your shopping?  The end of the year is always a great time in K-pop as specials and awards show abound, so was last week chalked up to the ‘naughty’ or ‘nice’ list?  Sunny Hill said “Goodbye to Romance,” the Melon Awards were last week–Ailee and B.A.P. won the rookie awards which brought Zelo to tears, JYP held his 19+ concert 나쁜 JAZZ BAR, the Brown Eyed Girls hosted SNL Korea, Mnet aired a two part documentary on the career of Tiger JK commemorating his 20th anniversary, Lee Seung-gi shared with fans “An Invitation to Me,” KARA‘s Seung-yeon and Ji-young made their live solo debuts in Korea, Baek Ah-yeon released “Daddy Long Legs” for the Cheongdamdong Alice OST, D-Day sang of “Just One Love” with In-jun of The Boss, ZE:A released an acoustic version of “Beautiful Lady” by Hyung-sik, JYJ‘s Junsu (Xiah, Xia,?) released the MV for his come back ballad “Even Though I Already Know,” SG Wannabe‘s Lee Seok-hoon sang “Don’t Love Me” for the I Miss You OST, Hello Venus want to know “What Are You Doing Today?,” there was an awesome jump rope team on Star King who showed off their skills and even challenged 2AM, Brave Brothers collaborated with the likes of Teen Top, ZE:A, and Jay Park with songs promoting K-Food, Noel releases their music from the film Love 911‘s OST, comedian Jung Hyung-don became the father of twin girls and Epik High‘s DJ Tukutz welcomed a son, J-Min released “Beautiful Days” from the School 2013 OST, Joosuc released his latest song featuring Ailee, Kim Jang-hoon sang of “Someday,” and Full House Take 2 came to an end.

The following are the top 5 Things that happened last week in K-pop that I thought were ‘nicer’ than the rest.  Don’t want to be put on the ‘naughty’ list so here’s your warning–if you’re not up-to-date on your K-pop, then turn back now because spoilers may ensue.

5. The next classic K-drama kiss is … the Garlic Kiss?

Only in terms of most unromantic or funniest kiss–mark one up for King of Dramas.  The reluctant and bickering lead couple of the drama within a drama, Kyungsung Morning, Kang Hyun-min (Choi Siwon) and Sung Min-ah (Oh Ji-eun) each prepare in their own special way for their big kiss scene.

A lot of secrets were let loose when C.N. Blue hit The Go Show like which hyung not to cross (Jong-hyun), who’s a tiresome boyfriend (Min-hyuk), and maybe why Jung-shin cut his mane of glory (too many rumors of him being gay?). Unfortunately, the run of The Go Show has come to an end and next week’s show will be its last.

3. Lamenting over No More Us

Brown Eyed Soul‘s Jung Yup released his latest solo effort “No More Us,” the title track off of his album. It’s a song of lament over a lost love and all the things that went wrong in the relationship. His soulful voice is simply accompanied by cello, piano and guitar and the MV is a beautiful work of animation.

Comedian Yoon Hyung-bin made a surprise appearance on the latest episode of Gag Concert.  During one of his long time girlfriend (they’ve been dating for 7 years) Jung Kyung-mi‘s segment he made a surprise proposal giving her a bouquet of flowers and ring.  When everyone started chanting for a kiss he kissed his bride to be, announced that they will be getting married on February 22, 2013, and then carried her off the stage.  It’s not a K-drama ending, but sometimes real life ain’t so bad either.

Immortal Song 2‘s Winter Special with Friends that aired his past week had many awesome performances from the show’s regulars along with their special guests including Sandeul and Baro of B1A4 and Kim Yoo-jung, Jea and Jo Kwan-woo, Son Ho-young and Kim Tae-woo, and Sweet Sorrow and well, everyone couldn’t beat the vocal powerhouse of a performance that was Jung Dong-ha and Ali‘s cover of Lee Moon-sae‘s “Kwanghwamun Love Song” which won the night.