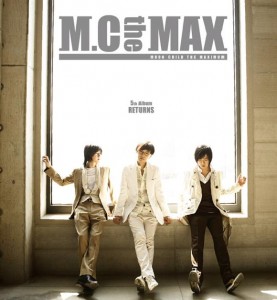 Hello and welcome to another K-pop Indie Gem! This week, we’ll be talking about an already established band on the Korean music scene, albeit less familiar to international fans: M.C the Max. The band right now has three members: Lee Soo (also stylized as Isu or 2Su), the vocalist of the group, J. Yoon, who plays the violin and bass, and Min-hyuk, the drummer of the band. If Lee Soo’s name sounds vaguely familiar, it might have to do with his collaboration with e.Via, “Crazy Fate.”

The band’s current musical direction approaches the rock genre, but it hasn’t always been like that. Going back to their beginnings in 1999, techno suited their tastes much more. Their first release in 2000, Delete, was heavily influenced by electro music, but rock seeped into their later works and has prevailed until today. Now, M.C. the Max has solidified their place in the industry with their brand of soft rock ballads within a fusion of pop, techno and rock.

Going back to the start, the group’s original stage name was Moon Child and the trio was more like a quartet with ex-member, Jung-min, who used to play the electric organ. Under this name, they releases the aforementioned Delete, as well as, 2nd. Jung-min left after 2 years, in 2001, to pursue an acting career. The last album they released as Moon Child had a rather defined direction, with most of the songs being metal-influenced rock ballads that were dominated by the violin. Quite orchestral in sound, both albums enjoyed moderate success.

Moving to a new stage in the group’s career, Moon Child was then put away to reveal Maximum, or M.C. the Max. With this change up, they would also get the recognition they deserved. This time under the label of X-Japan‘s Yoshiki, they released their first album as a trio, M.C. the Max!. As with their other readjustments, the violin sounds on this release came out comparably toned down, with the effect of being more efficiently used, flow-wise. Appreciating the album presently, tunes in this tracklist appear to have made little progression in terms of composition; the release has a handful of ballads mixed with a harder rock sound. Despite this, the boys were to be working towards their first ever number one song — from Vol 2: Love Time. Sixth Sense:

Solitude of Love doesn’t seem to have diverged from their defined music style. More ballads and rock tracks take the listener into their world of heart break and misery. Their sound, while darker, is also more distinct from the last, as if they’d allowed themselves to experiment even more. Surprisingly, the calmer songs too come off emotionally unsettling, with tracks oscillating between bitter tranquility, uncomfortable silence and a nightmare-like reality.

Next on their roster came The Rusted Love, together with some digital singles. Legal problems would then complicate for a while M.C. the Max’s activity. Their last album had been a commercial success, but You and I Entertainment, the label the band was under, had some unrealistic expectations from the boys (it was never mentioned though what went wrong). These contractual issues burst into a scandal and a lawsuit, where You and I Entertainment said they were entitled to use the name M.C. the Max. The band won the trial, but the company went on and planned to disband them and make another band with the same name. They actually even released some tracks of a surrogate M.C. the Max, claiming the original trio had no future because of the trial. Needless to say, M.C. the Max quit the company and went ahead with their career.

And we’re getting to my favorite part in this edition of M.C. the Max — “Returns,” the title track of their 2007 album of the same name. A rock ballad, this has been more of J.Yoon’s song. On top of the man’s reigning vocals (right after the middle-8 specifically), the violin’s presence as well as the strong, imposing bass meld together body and rhythm. The track is incredibly addictive and its powerful melodic line makes it just about perfect:

The last song I want to share from the band is “Don’t Understand Tears,” from their last full album, Via. Suggested listening includes “Finding Love,” “Oh, Plz,” “Rain,” “Don’t Be Happy”, and I’d throw in Lee Soo’s solo album. It’s hard to put everything this band has done in an article, but I hope the figments I showed here will convince you to take a look.