I’ve always felt that if she hadn’t became an idol, SNSD’s Sooyoung should have become a model. Tall, long-legged, and naturally thin, she was born with the three most distinctive super model features. Her face is wider and more round than most idols, her jawline a bit more square — more traits that many models possess. And aside from her physical attributes, Sooyoung has a natural affinity for the camera and posing, moreso han the rest of her band members. She’s better at emoting, arranging herself into flattering positions, and capturing attention with a single look. Whatever skill she may lack in performing, dancing, or singing, you can’t deny that Sooyoung’s a rather good model. 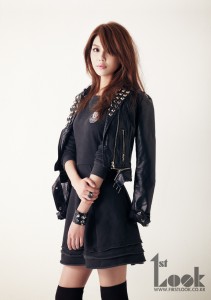 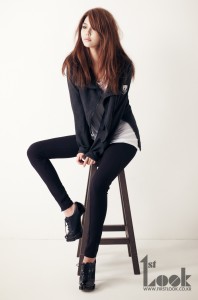 Every photo in this photo shoot can be summarized in three basic words: white, black, and messy. Well, maybe not messy as much scrappy — Sooyoung’s stylist was certainly channeling young urban hipsters when throwing together these looks. Clunky shoes, black, band tees, motorcycle jackets, and skinny jeans — these outfits may have just as well came out of an Urban Outfitters catalog. Sooyoung’s messily styled hair also speaks of the careless coolness associated with urban fashion. Not just that, but the very plain background — no color in sight, minimal use of shadows — makes this photo shoot seem a little more model. Sooyoung, for her part, did wonderfully in this shoot. This style fits her, the mixture of tight-and-loose clothing flattering her skinny figure. In the first photo, she stares at us from her one visible eye, her lips slightly puckered, her look intense. Her pose, however, is a little more coquettish, with one hand clasping her arm and her hits jutted slightly back. She wears a dark grey dress that looks made from a sweatshirt and a studded leather jacket thrown over her shoulders. She looks seductive without being overly sexy or revealing. In the second photo, she sits on a stool, her gaze directed away from the camera. Her expression is filled with ennui, looking bored and sad, but her position allows us to admire her long legs. I’m not sure if she’s wearing leggings or skinny jeans but either way her simple outfit looks great. 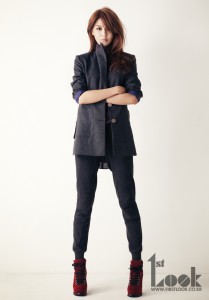 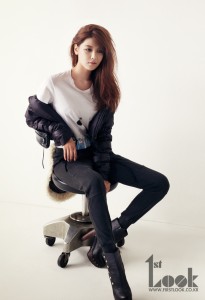 The first dash of color appears on Sooyoung’s shoes, a pair of laced, red ankle-length boots. Sooyoung looks more commanding in this photo, her figure resolute in her crossed arms and parted legs, and the direct look in her eye giving her giving her an air of seriousness. Again, her fringe conceals one eye, adding mystery. She looks tired in the next photo, slightly hunched forward and the shadowing giving a vague impression of bags under her eyes. Normally, this wouldn’t be a good thing for a photo shoot, but here it fits with the overall feeling of ennui. I don’t particularly like her puffer jacket. 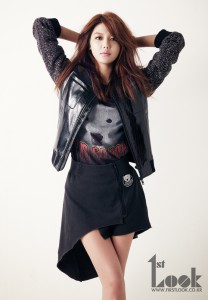 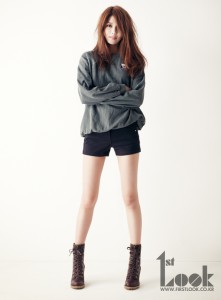 In the most deliberately sexy photo in the shoot, Sooyoung holds her arms above her head and crosses her legs. Her asymmetrical skirt gives us a teasing amount of thigh to look at while the rest of her is covered. However, Sooyoung’s expression looks misplaced. For her provocative position, she looks absolutely blank. Her expression the final photo is better, because she’s finally smiling. Again, her eye is hidden, her legs are parted in a stance, and her arms are crossed, but here Sooyoung seems to be saying “Come at me” rather than asserting authority.

What do you think of Sooyoung’s shoot?