Side B: Epik High, Epik all day, err'day 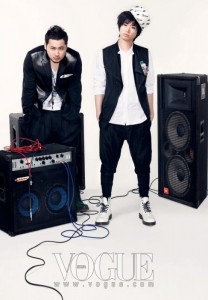 While Epik High fans collectively twiddle their thumbs waiting for YG to drop news on an upcoming new album, let’s take a second to explore some of Epik’s overlooked gems.

Before army duties and stalker woes, Epik High was one of the most consistently productive groups in K-pop mainstream, having released eight full studio albums, one repackaged album, and one remix album in their almost-decade long career. With a group as prolific as this one, it’s just impossible for me to properly cover all of their best in one post, so I sincerely urge you to check out Epik High’s entire catalog, from beginning to end. Epik High’s music is good for a sunny day, good for a rainy day, and everything else in between.

Let’s start with their sixth album [e]. This album is a whammy of an album, with two discs totally 30 tracks. Epik High’s music has always been extremely melodic hip hop, and this album illustrates that style perfectly: the two discs are filled with vocal-less, word-less instrumentals that act as little refreshes between the rap-heavy tongue-twisters.

This is Excuses, featuring MYK.

While Epik High’s discography is filled with beautiful sounding songs, “Excuses” is a little on the bland side. But the sound fits the mood of the song, and the lyrics are the highlight. There’s a slow plod to the song, almost a little drone-like, which is nicely emphasized by the repetition of certain words and pessimistic ideas in the lyrics.

Next up is 연필깎이 or “Pencil Sharpener” off their fifth, Pieces, Part One. This is Epik’s shout-out to all the MCs out there, stuck in a rut, words not coming to them. Last time I checked, I’m not a rapper (sadly), but “Pencil Sharpener” acts as a mood-lifter for anyone with dreams, really. Epik High’s music is often personal, so “Pencil Sharpener” is not anything out of the ordinary for them, but the lyrics are meaningful, witty, and encouraging.

FAQ is one of their shorter tracks off Remapping the Human Soul, but it’s one of the funnier ones, sprinkled with self-deprecating humor and a good story behind it. The song is basically a gathering of all the insults hurled at Epik High as a group and its members. It can be the “typical” rap song in terms of theme — haters hating on us! We must rebut! — but when we interviewed the group eons ago, Tukutz lamented about how Tablo and Mithra were restrained with writing the disses about themselves, but went to town writing the disses associated with Tukutz. Good times.

Cipher is a brief, intro-like song to Map the Soul, the album Epik High released without an official label. Map the Soul is my favorite Epik High album and I have nothing but good memories of “Cipher,” a track full of attitude and ferocity, despite clocking in at briefly over a minute. It really sets the tone for the rest of the album.

The rap game is all show and lyrical descension
Pretension, obsession for physical possession
I’ll pay for your CD but pay no attention
Ascension, I’ll never lie to get it
Fake people piss me off like diuretic
To die or live it, you know the choice is yours
Just make sure that the voice is yours

I love the use of the harp in contrast to the heavier beats in this song. The lyrics are cheeky and full of zinger after zinger. Wordplay is a mainstay of Epik High’s lyrics, but one of the things that I appreciate most about Epik High — and I’m sure a lot of English-speaking fans agree with me — is that they are truly bilingual with their music. The same depth and beauty that exists in their Korean lyrics exist in their English ones, and their songs are not merely two different languaged versions of the same tracks. There’s a lot to uncover in all their songs, whether they be Korean or English, and it’s just really satisfying to be able to do that.

Can you tell that Map the Soul is my favorite Epik album? “London” is an instrumental and probably a melodic representation of what London feels like, in music form. It’s moody and haunting, and packs a punch, despite the song being relatively uncomplicated.

I want to give an honorable mention shout-out to Eternal Mourning: Soundtrack to a Lost Film, which is an all-instrumental album that Tablo created with producer Pe2ny, who is featured frequently on Epik High’s albums. This was a one-off project that Tablo worked on, and the idea behind the album is self-explanatory: these songs are imagined as they would be if they were used to a soundtrack of an unnamed film. Every single song off this album is worthy of being featured in this article, and to prevent myself from merely embedding every song, I’ve picked “The 8th Day,” one of the more whimsical songs off the tracklist. Most of the album is filled with seductively jazzy tunes, and “8th” is a bit of a happy departure.

Like I mentioned earlier in the post, the entirety of Epik High’s discography is worth a listen. They just don’t release bad music, period. My list — it goes without saying — is very incomplete, so please chime in in the comments section with your favorite B-sides from Epik’s work!

(Images via Vogue and Woollim Entertainment)