Along with the teasers for their upcoming comeback, the two-manned group, TVXQ, has appeared in Vogue Korea’s most recent issue. Well into their twenties, Yunho and Changmin have been in the idol business for nearly a decade. They are two of the most well-known and respected idols, beloved for their personalities — noble and kindhearted and blunt and sarcastic — as well as for their talents. They’re also extremely good-looking, which is more than apparent in their shoot for Vogue Korea.

Yunho and Changmin look like modern-day greasers for this photo shoot. The tight black leather pants, the slicked-back hair, and the leather jackets give the impression of hot, rebellious hoodlums. Turned over trash barrels, motorcycles, fire, debris, graffiti, and barren walls create the perfect set for this photo shoot. It fits with the theme, blending it with the mens’ bad boy outfits, making them belong and yet stand out in every photo. Yunho and Changmin take up most of every picture, the camera zoomed in on them so that they’re all that can be seen. The men are the focus in every photo, the shadows and lighting only making them more prominent. 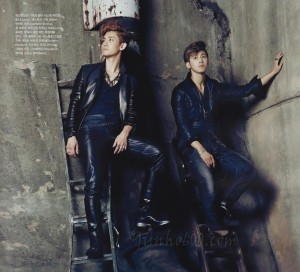 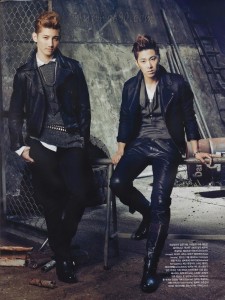 That being said, there are some problems with this shoot: namely, Yunho and Changmin’s lack of variety in expressions. Although not necessarily a bad thing, it’s definitely noticeable when a person has the same face in every photograph. Normally, it’s a smolder, like how it is in Yunho and Changmin’s case. Playing the part of dangerous men, the glowering is suitable but not as intense as it should be. I don’t feel my soul being stabbed when I look at their faces in every picture. Although captivating, they don’t convey any emotions or feelings in this shoot. However, they do look hot in their tight leather pants. Faded jeans, boots, low necklines, chains — Yunho and Changmin look nothing but gorgeous. 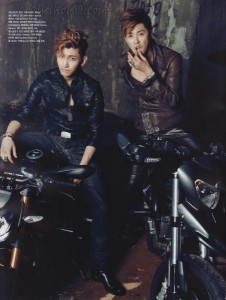 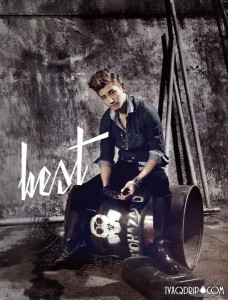 Perched on motorcycles, Yunho and Chamgin’s half-unzipped leather jackets provide us with a tantalizing, teasing view of their chests. Changmin’s sleeves stop under his elbow — an oddly effective lady-killer. You wouldn’t believe how attractive forearms look when sleeves are rolled up. But Changmin’s otherwise hot appearance is ruined by his bird nest hair and lackluster expression. Beside him, Yunho tenses his lip seductively — or creepily, depending on how you look at it. In one of Changmin’s solo pictures, he suffers from bad posture and worse hair styling, but looks desirable in his popped-collared shirt. 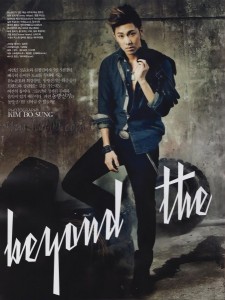 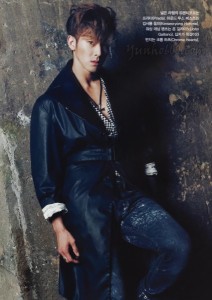 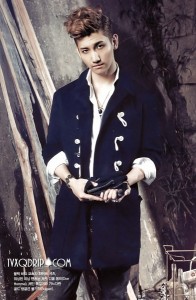 Yunho looks like he’s wearing the same denim shirt as Changmin in one of his solo shots. However, his is barely buttoned — I approve — and his casual stance has more of an effect than Changmin’s hunched over position. His next outfit was a mess, however: messy hair covering half his face, a long black leather trench coat belted at his waist, and a checked shirt underneath. Still hot, but not nearly so suave. Changmin continues to suffer from bad hair styling in his next photo, half his hair styled up and the rest slicked down. It doesn’t have the sensual effect the photo shoot’s looking for. 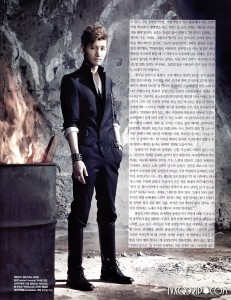 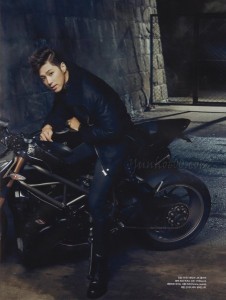 But oddly enough, his black jumpsuit does. Maybe it’s because the elongated fabric only draws attention to Changmin’s fit body line, but he looks gorgeous. His head looks oddly big for his body, and he’s still wearing the same baffled expression as in his other photos, but at the very least he looks gorgeous. And then finally, Yunho on a motorcycle. That is all.

What do you think of TVXQ’s photo shoot for Vogue Korea?