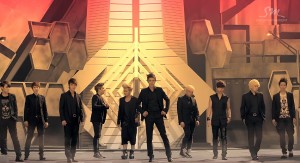 For so long, K-pop MVs have consisted of pretty boy/girl group members populating a universe which seem to consist of only them, and where the only activity that goes on in there is dancing and looking good. After our endless grumbles about this, and coining and overused term for it (the Box), K-pop Music Video makers have finally heard us out, and are now trying harder to bring something more unique to their Music Videos.

But to they really work? Here are a few trends observed in Music Videos/Performances recently, and a take on them.

These days, it is not enough to just be decent in singing and dancing to make a mark. Debut concepts these days are more noted for the lengths which companies would go to imbue their creations with some superhuman or outer worldly powers of sort.

Examples include VIXX with a song named “Superhero” and a MV set that could pass off as a space ship interior and A-Jax with “One 4 U”, where they dress as warriors and strut about, vanquishing kings in the process. 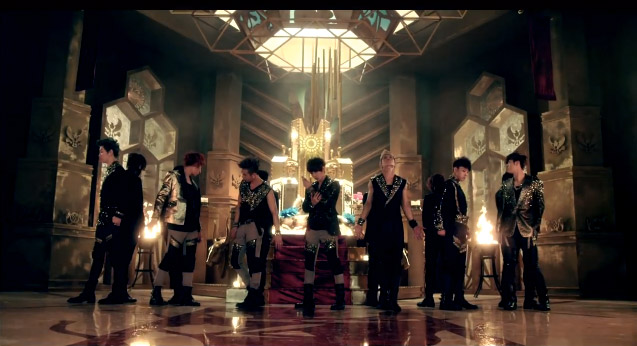 Bonus points also have to go to acts such as EXO, for creating an entire genealogical path (The tree of life and EXO planet anybody?!), as well as B.A.P with the whole alien concept as well as the mutated bunny known as a Matoki.

And lest you thought the whole thing was mutually exclusive to boy bands, we have AOA, which really played up the “A for Angels” angle with the music video showing the girls literally descending from the sky with an angelic glow. Talk about subtle there. 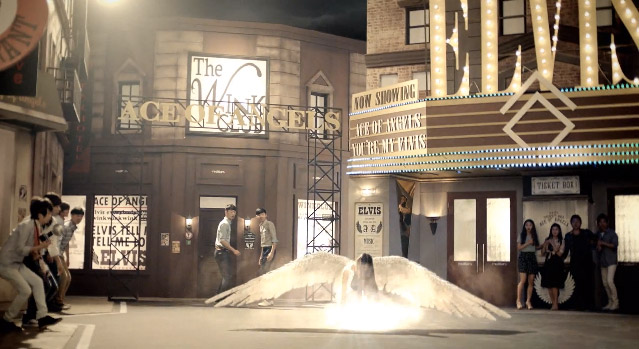 While it must be admitted that most of us think of idols as being an extension of perfection (in some ways), so it works for the companies to play up such desirable and dominating traits to attract fans. Also, in some ways such over the top concepts also help draw attention in what could be called an overly crowded K-pop arena, where many an act gets made (or broken) on the strength of their debut.

However, on the flipside, what one considers a bold debut, could be to others a pompous and cocky rookie. Also, there is the argument that groups that fail to live up to the bold promises always disappoint far harder than groups that promise a bit lesser, thus setting themselves up for more criticism. A good example could be AOA’s debut, which could be best described as slightly underwhelming.

And after all the talk around circles are after all, human, surely it would make more sense to understate those impossible (albeit awesome) traits?

While I admit to also enjoying some of the bold, God-like Music Videos, for the ideas and especially if the acts can pull it off, part of me also finds it a bit overboard at times.  The jury is still out on this one.

The Bring Your Pets to Work Day

Given how animals at in popular culture seem to be extensions of human characteristics, it was only natural that sooner or later they would be used as metaphors in music videos.

A pretty common example would be big black dogs restrained only by leashes, used to signify menace (in the case of Shinhwa) or to show dominance and strength by an unexpected party (in the case of Baek Ji-young’s). 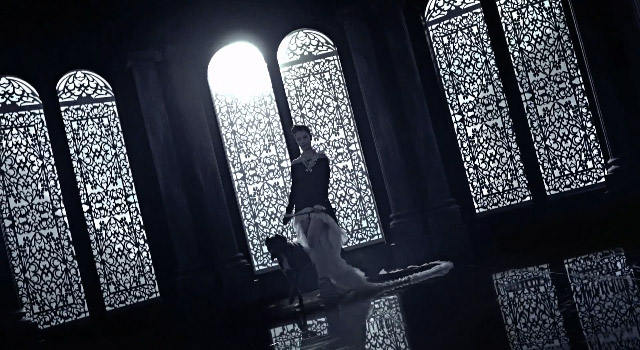 And on the other extreme, you have SNSD-TTS, where Tiffany holds a poodle in her arms while getting her hair done. That same poodle also makes an appearance at various points of the video, playing up the feminine nature of the music video as much as the pink and light blue fashions do. 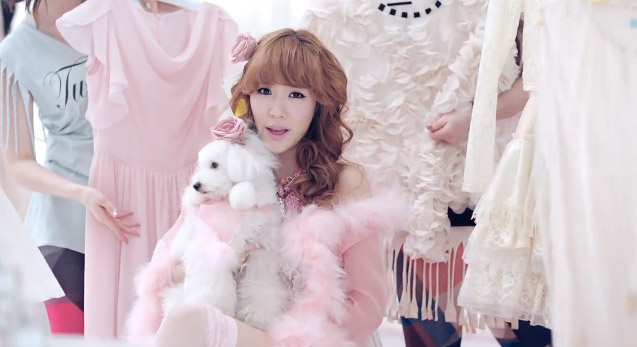 A left field use of animals could be seen in 4Minute’s “Volume Up,” where the girls performed with snakes around them, ostensibly as a metaphor for online criticisms and the half truths surrounding them in real life. While that did call for a bit more observation during video-watching, it was certainly an interesting diversion.

Personally, I am okay with the animals as long as the animals were treated fairly in the filming process, and their inclusion helped to tell the story.

However, the award for most awkward use of animal in K-pop has got to go to 2NE1 for their Inkigayo stage. Watching it, the only thing that would probably come to one mind was how it would really suck to be the parrot. 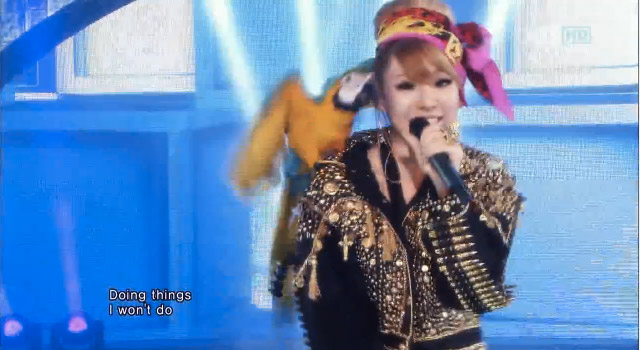 The Let’s Shoot in Some Exotic Locale Plan

As seen in: Beast’s “Beautiful Night,” Sistar’s “Alone” and “Loving U.” Big Bang too, for their love of New York in “Blue” and “Bad Boy.”

Nothing says international and sophisticated than a shot of your bias walking down the street of some foreign land. Besides, overseas shoots also serve as a nice way for any entertainment company to send their artistes out for a holiday (or at least see another country for a while), and it lends credence to the fact good money was spent on the concept. 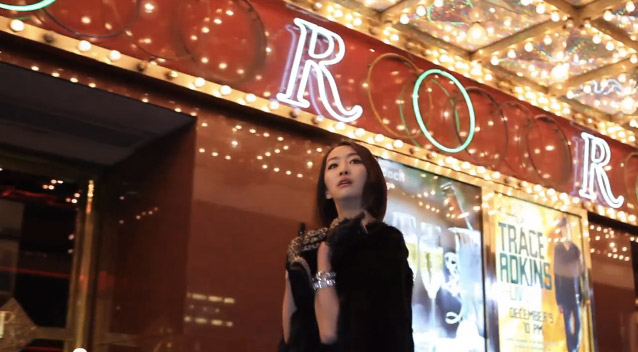 Except that many a times, the exotic locale rarely figured in the plot. How many of us watched SIStar’s “Alone” with anticipation upon hearing it would be shot in Las Vegas, only to find that the Las Vegas bits largely consisted of what could have been stock footage of the glitzy night lights, with a bit of the girls walking down the streets, and the rest of it shot in a night club/studio set? 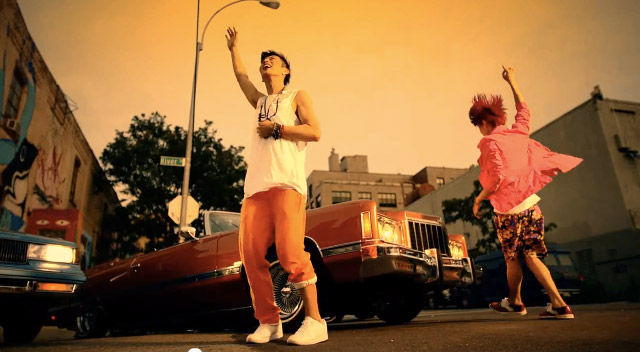 Or come to think of it Beast’s “Beautiful Night”, which distilled New York down to two completely unrelated things – Low Rider cars and Odd Fashions. Not helping the cause was how the models for a dance scene were sourced – A Craigslist, complete with the (perhaps discriminatory) line “Caucasian Actresses/Models”. Seriously, all of the three things (maybe not the cars) could have been sourced just as easily in Korea. 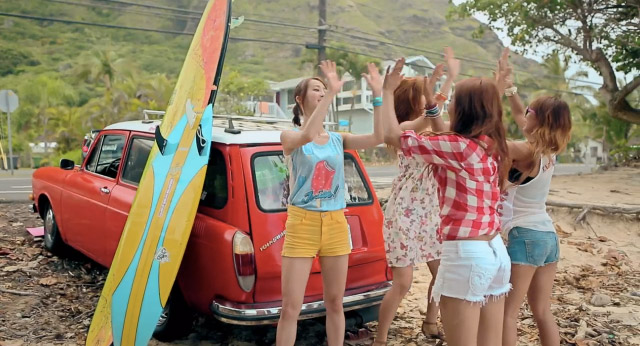 Granted, overseas shoots have been done nicely, like SIStar’s “Loving U”, which played up Hawaii’s appeal while at the same time looking like a really fun shoot, but for the most part most MVs tend to just use the overseas locale as a selling point, and not much else.

Until MVs actually make the exotic locale seriously matter/be relevant in the plot, it would just serve as something that ramps up the production budget while not doing a lot.

The Let’s Play up The Bitter, Jilted Lover Memes

As seen in: Infinite’s “The Chaser” and MBLAQ’s “This is War”

Given how many K-pop MV viewers do not necessarily speak the language, or have a rather weak grasp of it, it is hard to think of a better way to get the point of the song across than with literal hints in the music videos.

Among some of the more enjoyable themes to watch out are the ones on lovers spurned, simply because of how creative directors can get. I mean how do you tell a story of spurned loves, or rivalries, without resorting to the overt clichés or blatant guy vs guy fighting?

Two examples I found rather interesting were MBLAQ’s “This Is War” and Infinite’s “The Chaser”. The MBLAQ one was probably more liberal in its theme of two men fighting over one woman, with one of them (literally) moving out of the relationship in spectacular fashion. While some might find the whole thing excessive and a bit ridiculous, at least there was an attempt to interpret the lyrics through the MV. 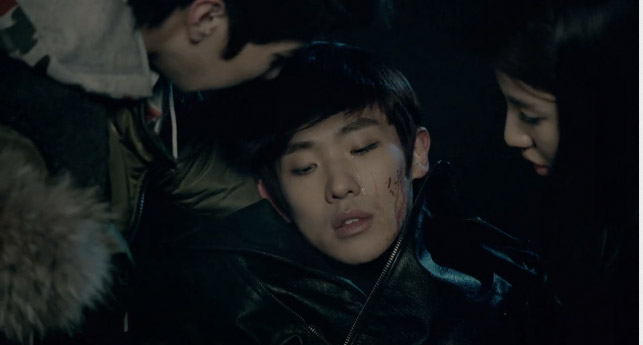 A far more evolved example was Infinite’s “The Chaser”, which touched on a lover, though being forced out of a relationship, promises to return and try again. The video certainly did play up the metaphors of the jilted one trying too hard to get back into the relationships. 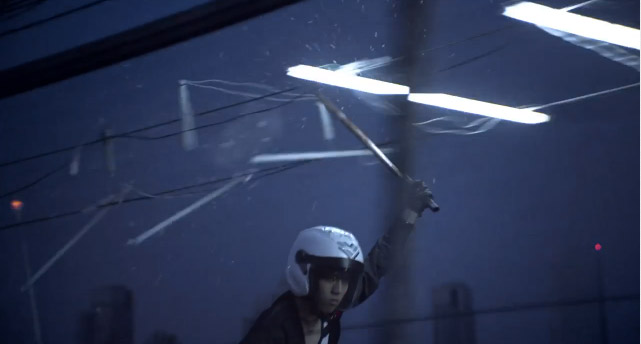 For starters, there was the scene where two members ride on motorbikes and smashing the fluorescent lights. Just think of the sounds made from the lights breaking, which really sends a “warning signal” of sorts to the lovers they are going after. 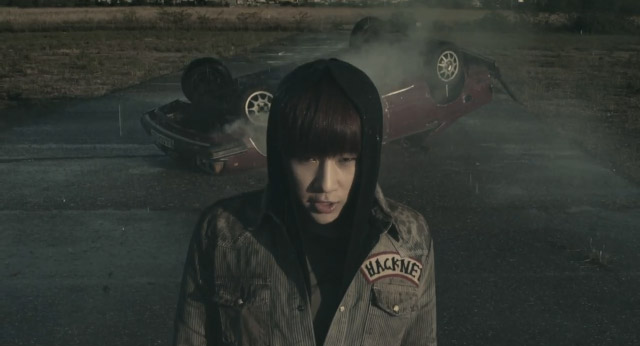 And there is the scene where Sung-gyu walks away from a wrecked car, which in previous scenes was shown to have contained Myung-soo, leading to some conjectures that it could have been a parallel to show love rivals trying to harm each other for an advantage.

Still, I do enjoy such metaphors, partly for how they do advance the plot, and also for how directors attempt creativity amidst the need to stick to censorship rules.

So Seoulmates, what other new MV trends have you observed, and which ones have you liked or disliked?