Welcome to this week’s K-pop Indie Gem featuring Soran. Soran was formed back in 2009 consisting of 4 members, namely Go Young-bae (lead vocalist), Seo Myun-ho (bass), Pyeon Yoo-il (drums) and Lee Tae-wook (guitars), dedicating themselves to produce feel-good music for their fans and listeners. I’m going to have to admit that I haven’t followed this band since its beginnings, and have only heard of them thanks to Kwon Jung-yeol‘s (10CM) collaboration with them earlier this year, which got me even more curious about the band and their music.

Since breaking into the indie scene with their own brand of music, Soran has picked up a few rookie awards from Beautiful Mint Life 2011 and the Grand Mint Festival 2011 Awards. They even have close celebrity ties you’d never have thought of, comprising of Choi Kang-hee (Protect the Boss), Sung Si-kyung and 10CM. 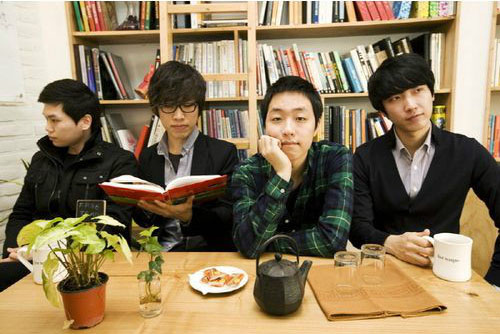 Unlike what their band name means (Soran – 소란: meaning disturbance/racket), Soran’s music comes off as more light-hearted and soft; relaxing and pleasing to the ears. Their music style ventures more towards soft pop, and sounds pretty similar to 10CM’s style of music, except with additional accompaniments of the bass and electric guitars.

This was actually the first song I checked out after listening to “I Must Be Crazy”, and it puts on a positive message to the girls out there to not put themselves through dieting and that they’re just as lovely without doing so.

Another track which is worth listening to is “Autumn Turn”, off their first EP, Why Didn’t I Know It Then, where other than the soothing tunes, you get to listen to the polished bass playing skills from Seo.

I also really liked “Warm Up” which is off their first full-length album, Natural. It has a more sensual feeling to the song, and sounds a little different from their usual upbeat tracks.

There’s definitely more great tunes from Soran which you can find in their 1st full-length album, Natural, and their 1st EP, Why Didn’t I Know It Then. Be sure to check them out and have fun listening!