SNSD’s Jessica’s photo shoot for W Korea’s upcoming September issue is quite possibly my favorite photo shoot of hers yet. Jessica isn’t my favorite Soshi model; she generally does quite well but has no diversity in her photos, always having the same expression or attitude. She still has this problem in her W Korea photo shoot, but with the styling, setting, and general atmosphere of the photo shoot, this issue doesn’t really seem to bother me quite as much. The simplistic photography doesn’t have very many props nor any wide-range shots — the entire focus is Jessica. Titled “Mellow, Chic,” the photo shoot has dim lighting and shadows for dramatic effect. The mellow tones combined with the sexy styling and Jessica’s smolder creates an overall sensual atmosphere. 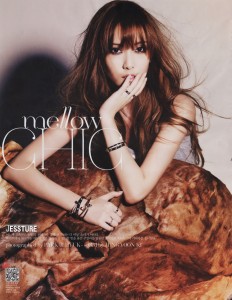 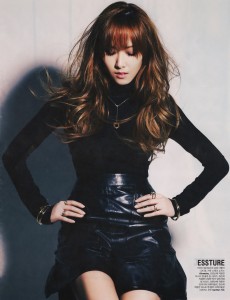 Jessica’s hair and makeup is stunning throughout the photo shoot. It’s the same in every photo: glossy, windswept hair and intense smokey eyes. Her lips are kept a pale pink. Her bangs are a little long, falling into her eyes, but it gives her a sexy, mysterious look. Jessica’s outfit cannot be seen in the first photo, covered by a furry throw or jacket covering it up, so instead the focus is her face. In the next photo, she wears an all-black outfit, a turtle neck plus a leather skirt. This outfit enhances her small waist and gives her the appearance of an hourglass figure, but the turtleneck causes her neck to disappear. 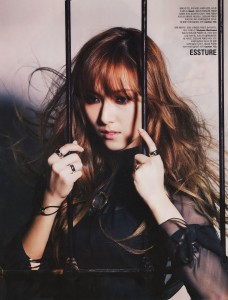 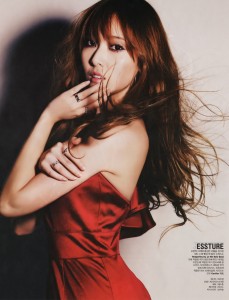 This third photo is more intense than the previous two. Behind bars, Jessica averts her eyes from the camera, her hair even more messy than before and her eyeliner a little heavier. Contrasting with the unruliness, she wears an elegant, sheer black dress. Her serious expression and the dramatic shading are what gives the photo its intensity. In the fourth photo, Jessica wears a silky scarlet dress. Her expression is more innocent this time, looking over her shoulder and staring directly into the camera. In all her photos, Jessica manages to convey something like a femme fatale, looking alluring, dark, and beautiful. Her black outfits, scarlet dress, and the picture of her behind bars helps create the image of a sensual, mysterious woman. 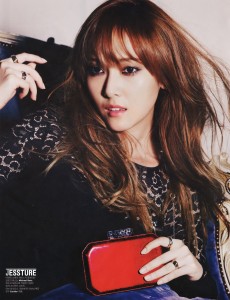 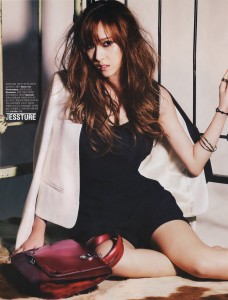 Jessica appears more doll-like in the next picture, her vacant eyes revealing no emotion at all. Her pose on the royal-blue chaise isn’t natural at all but the blue looks pretty with her bright red clutch, and the expensive-looking furniture — although we can’t really see much of it — makes her look affluent. In the last photo, more of a setting can be seen. It looks Jessica sits in the corner of a room. Her hair is still messy and her makeup is still smudged but she looks dangerous and beautiful. By her side is a red handbag and she wears a white jacket like a cape. Her mostly monochrome outfit goes with the wall behind her and highlights the modern feel of the photo shoot: clean, simplistic, dramatic. Still, Jessica conveys the image of a seductive, dangerous woman, a role she embodies wonderfully.

What do you think of Jessica’s photo shoot for W Korea?