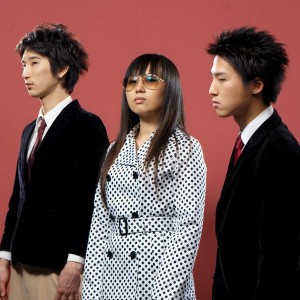 This week on K-pop Indie Gem, we’re spotlighting Instant Romantic Floor. The group is housed under indie label Pastel Music and is made up of three members: Brown Bunny (Lee Jee-reen), YeSlow (emcee Lee Yong-hee), and Sugar Flow (Song Hwa-young). You may recognize Lee Jee-reen as the mastermind behind Humming Urban Stereo, a one-man band that surprises with its mix of genres. Both other members of Instant Romantic Floor have also featured in Humming Urban Stereo’s works. Instant Romantic Floor is also similar in the aspect of being involved in several different genres: their sound is versatile and moves through genres easily, but each stopping point creates music that distinctly belongs to the group. Most of the music has a dance feel, but one that is very different from mainstream K-pop.

The group has unfortunately only released one EP and one album together. They released their first, self-titled EP in 2005, a treat that uses Sugar Flow’s R&B influenced, sultry singing and YeSlow’s strong rapping to differentiate from Humming Urban Stereo. Their second album, First Love Class, was released in 2007 and it took a more chaotic route, though there are still gems within the EP that retain the sense of the group.

Instant Romantic Floor’s music finds a balance between the mellow and a loud rapping style. Sugar Flow and Brown Bunny balance well vocally while YeSlow brings an unexpectedly powerful rap to the picture that spices up a repetitive sound. Some of the music of Instant Romantic Floor bears similarity to the works of Humming Urban Stereo, which isn’t surprising considering the members involved, but the way vocals are used help keep the group out of the more cutesy sounds of Humming Urban Stereo. Sounds that vary from sultry to aggressive help make the tracks fitting dance songs, especially ones that are suitable for the party-atmosphere associated with summer.

First up is “Luv Punch (radio edit).” The song (non-radio edit) serves as the title track for the group’s first EP, for obvious reasons. It’s catchy and soothing. The beat almost takes over the vocals, but there’s just enough oomph in their vocals to prevent that from happening. The only drawback is that it is far too close to Humming Urban Stereo’s sound and isn’t distinctive enough to establish the group as more than just a collection from Humming Urban Stereo.

The following track is from First Class Love. This album contains quite the mix of sounds that vary from sounding fitting to becoming chaotic.  “Romantique Summer” starts off with emcee YeSlow’s proclamations that smooth out into a familiar sound of Sugar Flow and Brown Bunny. The balance between the vocals and music tips more in favor of vocals in this song in comparison to most songs on the previous album. There’s also more electric guitar use that gives a more solid sound to the song.

The song “The Last Waltz,” is also found on First Love Class. The song starts slow, but quickly picks up the beat to a frantic pace. Sugar Flow is the clear star as her vocals carry throughout the song from soft singing to belts with emotion. The song is also one that is more cohesive than some of the group’s other tracks.

Though the group hasn’t put out another album together, you can catch them on Pastel Music 5th Anniversary: We Will Be Together and featuring in Humming Urban Stereo’s 2011 track “D.D.D.” If you’re interested in discographies, check out these tracklists for Instant Romantic Floor and First Love Class.

Instant Romantic Floor does music that is easy to listen to in any setting, and it’s definitely worthwhile to check out their other tracks. Their music tends to be on the softer side, but they contain catchy instrumentals and interesting mixes of jazz, R&B, house, and pop music–all of which unexpectedly work together for a pretty spectacular dance flow.