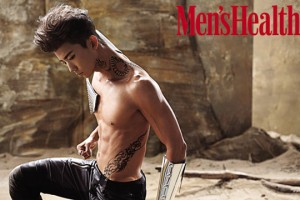 Has experience and skills in dance, singing, and acting oddly to the amusement of others. Often hangs out with five other men, all of them known collectively as 2PM. Was recently featured on the cover of Men’s Health, reiterating that yes, 2PM are beast-dols and rather well-muscled.

Jang Woo-young, one of 2PM’s main dancers and lead vocalists, released his debut solo album titled 23, Male, Single on July 8th. The album consists of seven songs, two of which had composition and lyrical input from fellow 2PM members: “DJ Got Me Goin’ Crazy” by Jun. K–also known as Junsu–and “Be With You” by Junho. The title track, “Sexy Lady,” has lyrics and composition by JYP himself, which is no surprise. His debut solo performance was with the first track of the album, “2Nite,” at the Mnet 20’s Choice Awards with a preview of “Sexy Lady,” but honestly, that didn’t do the song or Wooyoung justice as the entire theme or feel of Wooyoung’s songs wasn’t quite fit for a bright, summer type event like SISTAR‘s “Loving U” or Super Junior‘s Donghae and Eunhyuk‘s “Oppa Oppa.”

The first track of the album is “2Nite.” The track sounds like a show tune and strangely enough, like a track JYP would come up with even though he wasn’t the lyricist or composer of the song. The background track overwhelms Wooyoung’s voice, which is disappointing. The use of brass instruments was nice, but because they are so loud in the track, they transform into noise rather than music. If they had been quieter and Wooyoung’s voice was more prominent, the song may have been greatly improved. Those moments when his voice does have the strength to break through that strong backtrack are good, but they are far too few. The entire track is cohesive and seems like music Wooyoung intended to make if the rest of album is anything to go by.

The second song is the title track, “Sexy Lady;” the music video is shown below:

While Wooyoung looks fantastic and the choreography is appealing, let’s talk music. The style of this song fits not just Wooyoung, but also 2PM’s image. It’s sexy and masculine, both of which are hallmarks of 2PM’s numbers. The music has a pervasive electronic melody with a softer beat in the background, neither of which take over the song like the background in “2Nite.” More layers are added to the track as the song progresses, such as light synthesizer use and a more clipped beat as well as more vocalizations. The change in music to something almost hypnotic during the was welcome, and its lead into a more vocal aspect before return to the chorus allowed for Wooyoung to sing it out for a bit. The song is definitely catchy and somewhat memorable, though I don’t know how many people want to be caught singing “Sexy Lay-dae” over and over again. The only downside to this song is that it doesn’t vary much; the only time something new is brought in is towards the end. But as a dance song, one to move around to, this song does well. As Wooyoung’s debut song, it seems to play to his strengths, which are mainly in performance aspects like dance and stage charisma. Though the song does not do well in making Jang Woo-young distinct from 2PM. It capitalizes on his abilities, but it still says 2PM’s Wooyoung rather than just Wooyoung. That may mean that 2PM is just the right fit for Wooyoung, but it would be have been better to see something more distinctive. 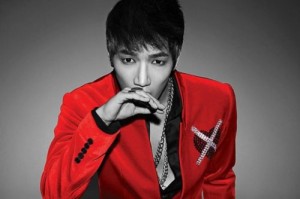 The third track is “DJ Got Me Goin’ Crazy” featuring Jun. K. Though Jun. K is listed as a feature, this song moves more towards being a duet between Jun. K and Wooyoung. Jun. K even takes the chorus of the song. It sounds a lot like “Hot” from 2PM’s last Korean album, Hands Up, but that is to be expected as Jun. K was also involved in the making of that track. This song was a surprisingly good. Initially it seemed that the track would be like “2Nite” with the overpowering use of synthesizers and a house beat. Though Wooyoung’s voice started out low, it grew to be strong enough to be heard and balance well with the song. Wooyoung’s rapping skills were also a bit of a surprise. While they aren’t particularly distinguishing, they are good enough to suit the song. The English is acceptable, not the best, but it works with the song; then again, English usually isn’t a problem for artists under JYP Entertainment. My only gripe about this song is that there are 15 seconds of no vocals that ends at the three minute mark that do nothing for the song. Rather than having the long gap, a break of only a couple of seconds would have been better. 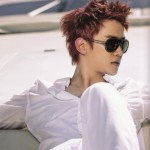 The fourth song is “Be With You,” which has lyrics and some composition by Junho. The composition is very much in Junho’s style, as seen from “Give It to Me,” also from Hands Up. The song displays Wooyoung’s vocal improvement from group debut days. Simple strings and percussion make up the music with a slow strong beat. Wooyoung displays a different type of talk-rapping that suits the beat. The song is a smooth listen, but for the most part, it’s boring. While Wooyoung can sing, his vocal ability isn’t enough to fill the song with appropriate emotions. In some parts, you can hear him straining to hold notes or reach higher ones. A faster beat may have been more helpful to his expression.

“Falling Down” is the next track. This song is easily one of the best on this album. Medium-paced, the song does a good job of building up to the chorus, then dissipating back down for the next verse. The foundation sounds to be from R&B, but the addition of extra details–the well-timed strings, the consistent tinkering sound that is closely echoed by a more fuller ring on certain beats that helps to create a contrasting melody, short piano interludes, claps here and there–all contribute to create a unique sound over the simple beat. Best of all, they all support Wooyoung’s voice, creating a very fluid sound. Perhaps because the background is quieter, Wooyoung’s voice isn’t straining and displays a bit of that vulnerability that the track needs. However, the ending is a bit abrupt; it goes from the end of a strong chorus to the end of the song in about three seconds. That transition could have been smoother.

The sixth song is “Couldn’t Even Start,” shown below:

This track strays from the hard dance beat that some earlier songs of the album have. While it doesn’t have that outright sex appeal that “Sexy Lady” does, this song overall sounds more lighthearted and different from just every other club song. After a listen or two, I’d even say this song should have been a candidate for the title track. Starting out with the strong synthesizer and electronic sounds, it sounds initially like it could have gone the same route as “Sexy Lady” or “DJ Got Me Goin’ Crazy,” but it quickly builds into something arguably more impressive. The song is in the lower register that suits Wooyoung’s voice and has an attractive base guitar line underlying the whole song. The electronic sounds are mostly regular, but every once in a while, they miss a beat, making it more interesting. But like in “Falling Down,” this song ends a bit too abruptly. It’s not as stark as in the previous track, but it’s still not as good as it could have been.

The seventh track which ends the album is “Only Girl.” The background music is basic: piano with the mute pedal or a muted keyboard. Occasionally there are bits of electric guitar to add to the flavor of the song. This track is the one that helps justify why Wooyoung is the one to get a debut out of the 2PM members, of course, aside from his popularity and how he tends to have less solo activities. This song needs expression and vocal ability, and Wooyoung delivers. 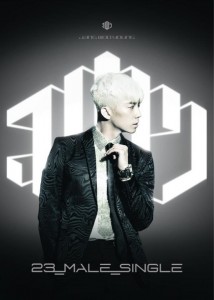 It’s not as expressive or emotional as, say, Junsu may have been able to do it, but it does have emotion, and the level of it was unexpected. Overall, it’s a good end to the album.

23, Male, Single wasn’t expected to do well by many because of that disastrous first stage. But, overall, I give this solo debut album a 3.7/5, and I’d like to disagree with my fellow writer Salima: Wooyoung perhaps can’t compare to Jo Kwon‘s fabulous “Animal” stage, but his debut is far from unsatisfying. There are stand-out songs on this album that show musical depth. It’s a different style from Jo Kwon’s, and their respective debut albums speak much about where each artist wishes to go. The entire album is cohesive in the end quality of each song: they’re all polished and well produced. Most of them have a hint of sorrow or regret within the song that suggests a style Wooyoung may have wanted to follow or develop. While Wooyoung’s vocal technique isn’t as good as that of others, his voice is still pleasant to listen to, and he does have that star quality that will serve him well, a little like Kim Hyun-joong from SS501, but not to the same extent (yet).

What’s your opinion, Seoulmates? Did Wooyoung’s solo debut album, 23, Male, Single, leave you convinced that this was a good move for him? Any favorites within the album?