2NE1 and the Journey to Love

When 2NE1‘s latest single “I Love You” was released last week, it shot straight to number 1 on just about every chart in Korea–but it took me a couple of listens to get into it.

The quiet beginning instantly became my favourite part of the song, the slow build reminiscent of Gotye’s “Somebody That I Used To Know.” The choruses and other verses grew on me over repeated listens, but that rap at the end keeps leaving an undesired aftertaste. But the colourful teaser images (and Dara‘s hair) had me anticipating this music video all the same; maybe it will convince me to like the end of the song more?


This isn’t a new side of 2NE1–we’ve seen the members look listless in other MVs like “It Hurts” and “Lonely,” but their respective songs were about heartbreak and the ends of relationships. Initially I thought 2NE1 was just moping around for half the MV, but further inspection of the lyrics show symptoms of (mild) love sickness. So, they are just moping around. But who hasn’t been love sick, really? And for all the moping that happens in the MV, there is some action and movement too (mostly courtesy of CL, who is too bad-ass for forlornness), which helps to balance things out.

If I were to describe the look of this MV with only one word, I would, without a moment’s hesitation, say: sumptuous. The rich jewel tones used in this MV are new for 2NE1, but they don’t feel out of place; by incorporating these colours into their crazy fashion as well as the sets, they create a whole new look in which 2NE1 really shines. Speaking of the sets, though there may be grumbles about reusing props from fans (though, those umbrellas do look familiar–and I’m certain that CL and Dara are sharing earrings), they are all colourful and join together to form a cohesive “world” for the MV–in fact, these, along with those in “It Hurts,” are the most “organic” 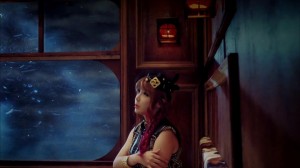 sets to be found in 2NE1’s videography. My personal favourites were the laneway in which Dara was singing and the train compartment featured during the second chorus. It was actually during this sequence that I was struck by how reminiscent the colour palette was to that of Alfonso Cuaron‘s “Harry Potter and the Prisoner of Azkaban,” and the stormy skies seen throughout the MV did little to dispel this notion. In fact the MV looked considerably darker than in the teaser pictures, something that worked in the MV’s favour. The ladies also looked stunning: their outfits were more sophisticated and ladylike than usual, with the jewel tones mixing with animal print and being accented perfectly by the bright gold accessories. The gorgeous nail art seen is also a welcome addition that further adds to the distinctly feminine aura that surrounds 2NE1 in “I Love You.” And, I have to say it, I love Dara’s hair. The partially shaved head was initially disappointing for me because I’ve already seen it done, but Dara manages to carry it  rather well, which is something to be appreciated. Even the hot pink hair looked better than G-Dragon’s lovely, though a bit flat. 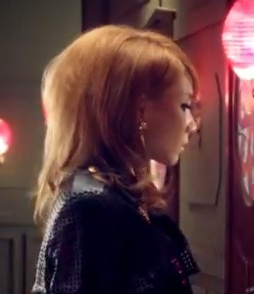 But the real bad hair in the MV belonged to the younger members of the group. Minzy‘s dark hair with the side fringe when she was in the bedroom suited her very well and gave her a mature look that matched the aesthetic of the MV, but she wasn’t always so lucky: the V-shaped fringe makes her look younger (she almost looked like a child in the limousine), while the grey streaks in her lighter hair near the end of the song just don’t fit with the look of the MV. CL meanwhile, actually has lovely hair–for the most part. They say a picture speaks a thousand words, so I’ll save everyone some time and direct you the the image on the right instead.

Other negatives in the MV included: a lack of Bom (though that may be because the other members’ scenes were more memorable); the extensive use of contact lenses, which seemed more unnecessary than anything; and Minzy’s awkward sexy dancing, which manages to look even more awkward coming after CL’s own well-executed performance. YG is apparently trying to tone down Minzy’s sexiness, which would make sense if she were 14 or 15. Minzy is already of legal age internationally and will celebrate her 20th Korean birthday in six months’ time; why try to suppress this now, after letting her don what many fans refer to as dominatrix gear in “Can’t Nobody?” As much as I hate to admit it, the younger Minzy strutting down that corridor looked sexier than the Minzy awkwardly gyrating while leaning against a wall. Pardon me, but shouldn’t it be the other way around? I feel like insufficient direction was given to Minzy, as though there was nothing more than “act sexy, but don’t overdo it!” for her to work with, resulting in what we see in the MV. Perhaps if a scenario like CL’s had been constructed for Minzy, then things might have turned out better. 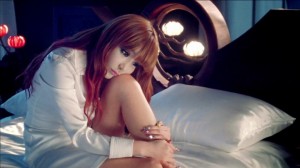 Apart from the aesthetics, there are also the thematic schemes of the MV to consider. The most prominent theme that drives the MV is that of the journey taken by the soul in its search for love. We start with CL lying on a bed on her stomach, but before the first verse is over we’ve already left the room and gone down the hallway, in a limo, down a rather “shady” looking lane, on a train and climbed up to the top of a lighthouse, from where the “Bring it back” line returns us to Bom sitting on her bed, one knee pulled up to her chest, as though to remind us that that, at the end of the day, this journey is just about a girl wanting to love and be loved in return. 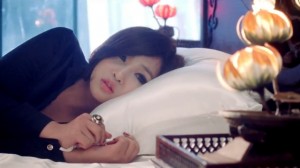 Another motif seen in the MV is that of the lotus. Lotuses are generally considered to be symbols of love, hope and change. It is also used in bedroom feng shui, and where do we see these lotus flowers? In the members’ bedrooms. But I’m more interested in not the symbolism, but the use of the lotuses themselves. Usually in K-pop, videos tend to strive for a more Western atmosphere–but there are exceptions to this trend, and this MV would be one of them. If YG wanted to use flowers to symbolise the blossoming of a new love, he could have used just about any flower, roses being the obvious choice (as seen in miss A‘s “Touch”). But lotuses don’t come with the ready-made connotations of fragility that roses do–in fact, lotuses are more in keeping with the strong, independent woman image of 2NE1, as they are seen to be more sturdy and resilient, yet also very beautiful. The lotuses, coupled with the rich and sometimes clashing hues, give the MV a very strong Asian vibe, with extra touches like the gold jewellery, the hot pink lanterns and Minzy’s parasol. Even for the performance version, of which we saw hints near the end, the centrepiece is a large lotus. 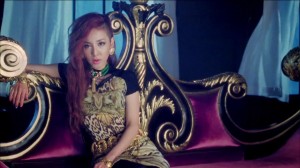 It was the wonderfully executed and un-forced vintage-modern Asian aesthetic of this MV, which I wasn’t expecting, that really won me over. 2NE1 manages to showcase more of their vulnerable side while seamlessly incorporating aspects of their girl power concept, in addition to presenting a more mature look. There was too much focus on the aesthetics of the MV (like the fashion) for my liking, but I liked the thematic components of the MV that were present. As for that rap, I still don’t like it, but I can appreciate that the change in scene in the MV at least matched the change in sound. 2NE1 had a rainbow of colours in the “I Love You” MV, but you can colour me impressed, because I’m giving this MV a solid 4 out of 5.

What did you think of the MV? Do you think 2NE1 look more mature too? Or was the MV not to your liking? Leave your comments below!