T-ara Going "Round and Round" 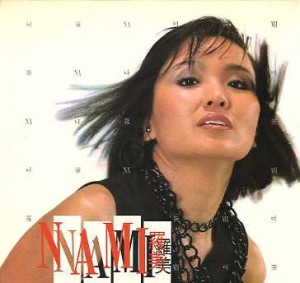 While the public is very much absorbed in the younger generation of Korean music, the music of yore is still remembered and respected. Immortal Song 2 gave awareness to the older generations of artists that were present before K-pop, and idols have their own ways of giving respect through covers of old songs or remakes.

Remakes in particular have gotten popular among idols and idol groups. One of the best tracks of the Wonder Girls‘ Wonder World album was their “Me, in,” a remake of Shin Jung-hyeon‘s “The Beauty,” and way back in their debut days, SNSD ironically promoted a remake of Lee Seung-Cheol‘s “Girls’ Generation.” Remakes of older songs are a great way to see firsthand how trends in music have changed over the years, and they also appeal to the masses, attracting the younger generation with the modern artists and sounds as well as appealing to an older audience looking for a bit of nostalgia.

Recently, T-ara released a MV for their remake of old singer Nami‘s song, “Round and Round.” The original song released by Nami in 1985 fittingly sounds very much like the music in its time period. The song itself is lively and colorful, and Nami’s portrayal makes it all the more fun. It was a mellow song anyone could jive to at the time without much care. If the song sounds in any way familiar, it was also featured in the OST of somewhat recent movie Sunny, where it was rerecorded with the main cast of girls as main vocals. That version was similarly jovial and fun, and it was used very effectively in the movie as it epitomized the ’80s, the time period where half of the stories’ events take place. As for T-ara’s version, well, see for yourself.

This song was first recorded in August 2011, and interestingly, it was supposed to take the place of “Cry Cry” as the girls’ following single. The song itself is left mostly untouched, sounding very much like the original with its 80’s influences, only refined with modern sounds. However through that refinery, the song lost a bit of its spunk. The girls of T-ara have an unfortunate tendency to sound like robots when singing in sync, singing in the same tone, and the effect is only further made blatant through editing. The robotic-ness of their voices took away some color this song could have had, say in comparison to the Sunny recording where the girls, while similarly singing in sync, were left relatively raw and untouched. However, Soyeon really is an asset to this group, and it’s especially evident in this song as while the other girls’ voices blended with each other, Soyeon’s voice stood out, bringing a little bit of distinction to the song. 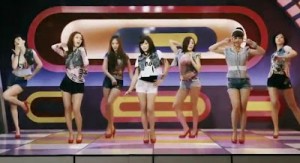 The verses of this song weren’t particularly strong, and the intro unnecessary and cheesy, but the chorus was fun and addicting, which somewhat made up for the song. The choreography of this song was intended to be lively and had its fair share of ’80s influences, but missed a bit in execution. The girls seemed a bit lifeless in some of the choreography scenes, just executing the move because they simply had to, and that kind of took away from the chipper mood of the song. The girls also weren’t exactly in sync, but considering the laid-back nature of the song, it’s forgivable as the moments where the girls seemed actually absorbed into the song and dancing for fun were the MV’s strongest.

As for the MV visually, honestly, it’s the same old material, following the same format repeatedly used for an MV. The MV repeatedly flashes from shots of the choreography to close ups of the members to the occasional backstage footage. Overall, the visuals in this song was nothing new, which is a bit of a shame considering all the easy footage they could have filmed for this laid-back, fun song. It’s colorful, varied, though not exactly vibrant. And what’s worse is that it suffers from the erratic camera editing present in a lot of T-ara music videos. The camera repeatedly and unnecessarily changes its view every single second, never lingering at a single shot, easily causing viewers dizziness. It’s honestly not as bad as, say, “I Go Crazy Because of You” but it’s still very distracting and detracting from the overall video. 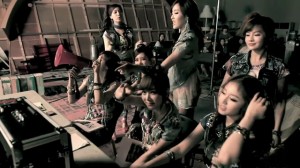 Other than the editing being unprofessional, the sets of the video appear to be reused from previous T-ara’s previous MVs, namely the Japanese versions of their “Bo Peep Bo Peep” and “Roly Poly,” only slightly tweaked. Furthermore, while the clothing appears very retro, I’ve never been a fan of the double denim look, though admittedly the girls were able to work it through their use of colorful and eye-catching accessories. The modern shirts were also a nice touch (Jiyeon‘s Avril Lavigne shirt did not go unnoticed), thematically fusing a past look with somewhat recent clothing.

T-ara also released a second version of the MV featuring more backstage scenes, and despite it mainly being filler, this version ended up superior mainly because in this version, it’s made much more clear that the girls are having fun. The song is one you’re not supposed to take seriously and just have fun with, and that is what the girls were doing in this MV, easily making it superior. This author usually disapproves of backstage footage being in music videos, but for this case, it seems to work better than the actual MV. 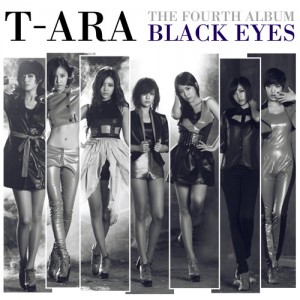 Honestly, despite being a sufficient reminder of Nami’s previous hit, T-ara’s version of “Round and Round” falls flat in comparison. While Nami’s original version had charisma and liveliness, T-ara takes away a lot of the fun with borderline robotic execution. Honestly, while “Cry Cry” isn’t the girls’ best song as it showed firsthand how disproportional the line distribution in the group is, it was a much, much wiser choice to opt for “Cry Cry” instead of “Round and Round.” “Round and Round” just isn’t attention grabbing or stimulating enough to be a lead single, and it also could have potentially pigeonholed the girls into staying with a retro concept, seeing this could have been the follow up for similarly inspired “Roly Poly.”

This is most likely the last MV we’ll see of T-ara as a seven member group, and it’s honestly a bit disappointing that they give us such a boring one as a last impression. Overall, this MV deserves a 1.9/5. What do you think Seoulmates? Would T-ara have been more successful with “Round and Round” or was “Cry Cry” a much better choice?